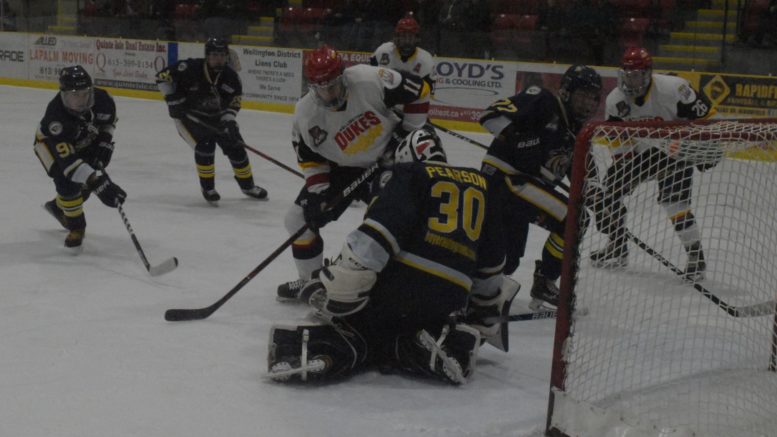 LOOSE PUCKS- The puck slips between Whitby Fury goaltender Luke Pearson's pads as Wellington Duke forward Frank Vitucci hunts for a rebound during the second period of Game 2 of the Ontario Junior Hockey League's 2019 Eastern Divison finals. Wellington was unable to capitalize on this and many other chances, falling to the visiting Fury 3-1. (Jason Parks/Gazette Staff)

Much like the first act of their 2019 Buckland Cup Playoffs, the Wellington Dukes are sticking to the script in the Eastern Division finals.

In the previous series against Cobourg, Wellington won Game 1 on the road and certainly had their chances to take Game 2 at home before the Cougars stole that contest.

Through two games of the second round of the Buckland Cup playoffs, the Dukes and the Whitby Fury have played to a split with each team winning a game on the road.

Wellington stunned Whitby with a Game 1 4-0 shutout on Thursday evening at the Iroquois Park Sports Centre but the Fury gained back home ice advantage in Game 2 with a 3-1 victory at Lehigh Arena on Saturday. Wellington certainly had their chances against Fury netminder Luke Pearson in Game 2 and not many Dukes fans can think about forward Dawson Ellis fanning on a two foot tap in at the goal mouth midway through the game without wincing.

If Ellis had converted his second goal of the series and made the game 2-2, it may have changed the complexion of the contest and Wellington could have a two game lead.

Of course, former Boston Bruins coach Don Cherry had the all time quote regarding ‘ifs’ when it came to playoff hockey with Grapes making a point that if his aunt was born a different anatomical parts, she would have been his uncle.

So Wellington finds itself back to square one, needing to continue its strong play on the road Tuesday night in Whitby if they want to get back on top of the Fury.

The Dukes have opened their Buckland Cup title defence with four straight road wins so the pattern of winning away from Wellington and mixing in a home win here and there might lead to the third round.

But it’s surely a failing gambit to think Wellington will continue to win on the road and not capitalize at home when the opportunity is handed to them.

Wellington came out with a strong start on Saturday in front of a crowd of nearly 650 fans.

Defenceman Ben Addison made a nice deke off the half wall and ripped home his first goal of the season off a feed from Brett Humberstone at the 6:05 mark of the first.

Wellington looked to be skating towards a fourth straight period of shutting out the Fury and was tasked with killing of a Zach Nelson minor penalty at the end of the frame.

A second or two after Dukes stopper Logan Bateman stopped a Shane Bull shot, former Wellington Duke Greg Smith went digging at the glove of the goaltender and jammed home a disputed goal to make it 1-1 with just 29 seconds left in the frame.

In the second, Wellington’s discipline or lack thereof would continue to haunt the hockey club. Just 23 seconds into a powerplay, an Elijah Gonsalves holding the stick penalty that came as part of a tangled mess of humanity inside the Whitby zone negated the Dukes powerplay.

As luck would have it, Whitby would wind up with a short man advantage and it was Smith setting up Dakota Betts for the game’s eventual game winning goal on three-on-one rush.

Wellington would continue to be snake bit around the Whitby net with Ellis failing to capitalize on a the aforementioned glorious chance and Andrew Rinaldi and Frank Vitucci also getting stymied time and again.

At the other end, Whitby would bang home another goal as Smith continued to haunt his former club, setting up a streaking Carson Gallagher at 10:47 mark to make it 3-1 Fury.

Wellington out shot the Fury in the third in an attempt to comeback but it clearly wasn’t the Dukes night as Ben Woodhouse clanked an attempt off the cross bar early in the frame.

That wasn’t the case in Game One as Wellington took a lead in the first period and never looked back.

Just after the midway point of the first, Rinaldi took a nice feed in the slot from Woodhouse and out waited Pearson, flipping a back hand effort over the netminder for the series first tally.

Clinging to a 1-0 lead thanks to the Rinaldi effort and some wonderful saves by Bateman, Wellington got some insurance early in the third off the stick of Ellis.

After killing a five-on-three disadvantage, Ellis would knock down a centring pass at mid ice and streak towards Pearson, getting the netminder to open up before sliding a shorthanded effort five hole at 2:22 of the third.

Later in the frame it was Vitucci grabbing a loose puck in the slot and firing home Wellington’s third goal of the contest at 8:32.

Rinaldi would strike on the powerplay with under two minutes to play to make it a 4-0 final.

Bateman had 26 stops in the Wellington net to post his first shutout of the 2019 playoffs.

Wellington returns to Iroquois on Tuesday for Game 3.

Ledes at Lehigh: Anyone who can remember how Whitby coach Rob Pearson played while he was plying his trade locally for the Belleville Bulls and later in the NHL for the Toronto Maple Leafs can see he’s molded a team in similar fashion. No transgression by Wellington goes unrequited and the Fury forwards are a mean bunch that take no quarter nor ask for any…If Wellington is looking for any assistance via affiliated players from the Greater Ontario Junior Hockey League they might be waiting a while. Former Dukes Ben Evans and Mitch Mendonca are on the club’s AP list but their Niagara Falls Canucks are running away with the GOJHL playoffs and that club isn’t expected to be bounced from Sutherland Cup contention anytime soon.