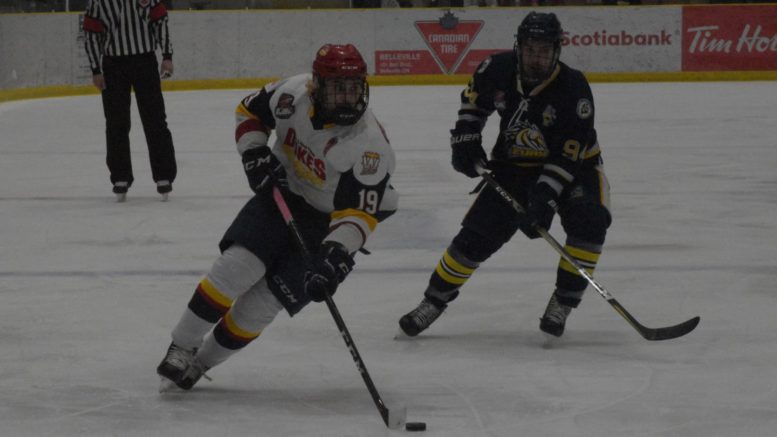 Wellington Duke forward Tyson Gilmour skates away from Shane Bull of the Whitby Fury. The Fury took a 2-1 lead in the East Division finals Tuesday night by virtue of their 6-1 victory on home ice. (Jason Parks/Gazette Staff)

The Wellington Dukes suffered their worst playoff defeat of the 2019 post season Tuesday as the club was sent down in defeat 6-1 at the hands of the host Whitby Fury in Game 3 of the Ontario Junior Hockey League’s East Division Finals.

With the Whitby win, the Fury have taken a 2-1 series lead.

Wellington was unable to survive a disastrous second period that essentially decided the contest.

Already down 1-0 after one thanks to a Derek McVey marker in the first, the former Georgetown Raider added his second of the contest just 1:40 into the second to give the Fury a 2-0 lead.

Noah Dollo would make it 3-0 just under three minutes later and the hosts were buzzing the Wellington net with abandon.

McVey would chase Wellington starter Logan Bateman at the 11:26 mark of the second in favour of Kyle Renaud and cap of the Oakville, ON natives hat trick effort.

Whitby’s Jacob DiDanieli would score a powerplay goal at 14:01 to make it a mitful for the Fury.

Wellington finally got on the board late in the middle stanza when Kennan Eddy found Brett Humberstone at 16:11.

Nic Papadopoulos would tally Whitby’s sixth goal early in the third which was the frame’s only goal.

Whitby netminder Luke Pearson made 26 saves picking up his second straight win of the series.

Wellington will look to get back on track Thursday when they host Game Four of the best-of-seven series.

In the other Southeast Conference final, County native Jett Alexander and his North York Rangers are poised to take on the winner of the Wellington-Whitby series.

The Rangers swept away the St. Mikes Buzzers Tuesday with a 4-3 win at the St. Michael’s Rink.

Through nine playoff games, Alexander is 8-1 with a pair of shutouts and a 1.62 Goals Agaisnt Average.