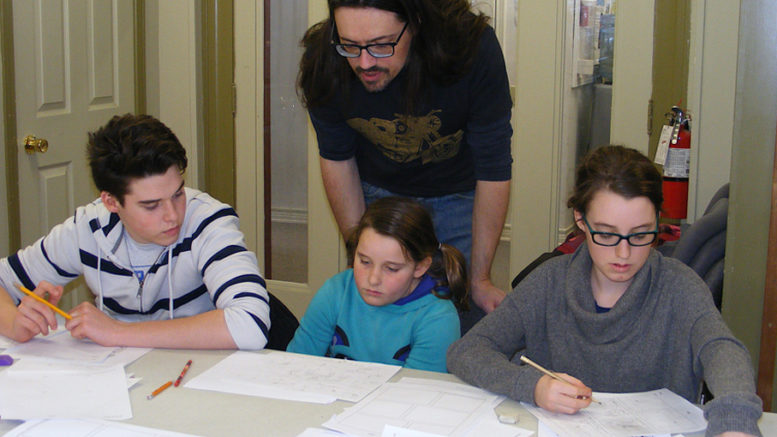 Creative juices were flowing at the Picton branch of the County of Prince Edward Public Library on Saturday as nine teens and preteens learned how to draw their own comic book pages.

Cartoonist Tim Snyder, of Black River, led the workshop and said he was having a great time talking about comics and how to create them.

“I’m just excited to talk to someone about comic books!” he said. “I’m encouraging (the kids) to write outlines, because writing is as important as drawing. But some people like to just dive right in.”

He said kids today are exposed to many different comic styles, and those in the class showed they had been paying attention to those different types of comics.

“I think a lot of them had drawn comic books before,” Snyder said. “Everybody kind of has their own kind of style. You kind of have to find what works best for you.”

The story lines in each person’s creation were as varied as the artists themselves, ranging from garbage men spilling garbage everywhere to greedy unicorns to a caterpillar who wanted to fly. Most worked in black and white, but one chose to create a coloured page. The room was totally quiet as each artist concentrated on his or her drawings.

“Everybody is such a hard worker here,” Snyder remarked. “They’re sort of self-managed.”

Snyder has been a cartoonist for many years, with his specialty being editorial cartoons. His work appears in The Times and in several Canadian daily newspapers. This was Snyder’s first comic workshop, but he’s an experienced art teacher.

“I used to do art classes around the county years and years ago,” he said. “I taught for a short time at Loyalist College as well.”

During the workshop, he and the students discussed how comic books can have an impact on people, sometimes as much as a novel can have.

He said he is a part of a group of local comic book artists who get together regularly to discuss comic book and drawing comics. They also have created their own comic books. Snyder can be reached on-line at tim@tonup.ca for more information.