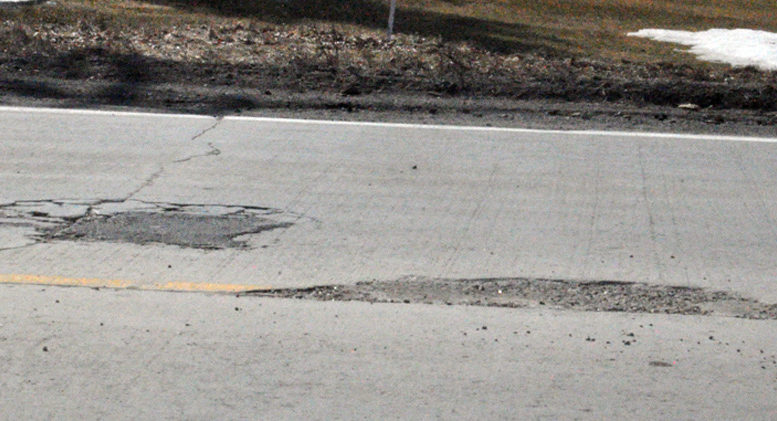 Staff asked to report on alternatives as council approves

At Thursday’s committee-of-the-whole meeting, members voted to award Pembroke’s Greenwood Paving Ltd. a two-year contract to supply 1,000 tonnes of emulsified asphalt for cold patching at a rate of $129.65 per tonne, estimated at $129,650 per year plus HST.

Picton councillor Phil St. Jean had recently attended the Ontario Good Roads Association conference in Toronto and he saw a range of new products demonstrated. He wondered how aggressively the County was considering making changes to its traditional process.

“Is there any consideration being given to newer technologies available to make products better incorporated into current or future tendering processes?” St. Jean asked, before adding he strongly encouraged his staff and councillors to consider any available technology to save money.

Chief administrative officer James Hepburn said staff are continually looking for better ways to operate and said through its upcoming asset management planning, those considerations would be made. He said the tender awarded to Greenwood was based on historic cold patching needs.

Bloomfield-Hallowell councillor Brad Nieman said at Good Roads, he saw a machine worth $45,000 the retailer claimed could provide a six-month fix for potholes. Another machine, valued at $120,000 was claiming to offer permanent a permanent fix. He thought both could offer improvements.

“If we’re spending at least $129,000 on cold patch, that’s just the material and not manpower. If we can spend $120,000 on a permanent fix and not have to be going back every other day, it might be worth looking into,” he said, adding the retailer offered to come to the municipality and provide a demonstration at no cost.

Hepburn said “obviously staff would like to look at it,” but added he didn’t know if there was any machine invented that could put material in a pothole and guarantee there wouldn’t be a problem. He assured council that no staff members like doing cold patch, so they’d be incentivized to look.

John Hirsch, of South Marysburgh, sought a report on road-patching techniques and materials.

“Could we not, then, formally ask staff to look into not just whether we’re using the right materials but whether these are the right techniques? The $129,000 is nothing. It’s the two guys — one driving a truck and another one using the shovel every single day that it doesn’t snow in the county. It’s a huge amount of money.”

Hillier’s Ernie Margetson asked that the report also include information about crack sealing on asphalt roads as he had some constituents inquiring about those operations. Hepburn said the municipality did provide $100,000 in its budget this year for crack sealing and said staff could report on both.

Jamie Forrester, of Athol, asked Hirsch to withdraw his motion to offer time to construct a more in-depth request with questions council would like answers to, including operations and equipment.

Hepburn cautioned a simple report about cold patching technologies was turning into a much broader discussion and with only an acting director of operations at this time, it might be taxing on staff.

“It’s well within your rights to ask for a larger report, but I caution you I don’t necessarily have the resources to deliver a report right now,” he said.

Hirsch withdrew his motion to allow for further discussion.