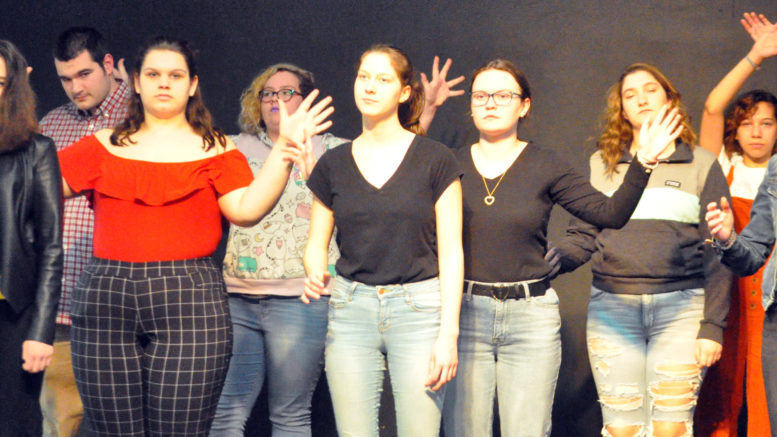 Creative collective - Performers rehearse PECI's latest theatrical production, A Call to Action, that they wrote themselves about Canada's treatment of its Indigenous peoples. It runs March 27-29. (Adam Bramburger/Gazette staff)

Students take on truth and reconciliation from a non-Indigenous perspective

PECI’s drama department will stage a different kind of extra-curricular production this year.

After a range of titles including musicals, Shakespearean theatre, and scripted tales of familiar stories, students will be perfoming in a collective creation called A Call to Action next week.

The 40-minute show examines the concepts of truth and reconciliation from a non-Indigenous perspective. 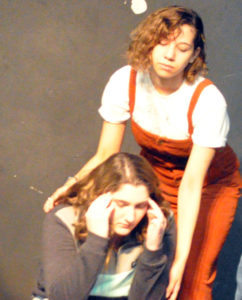 Senior students Aliyah Jarvis and Anthony Cumpsty have participated in school productions before and they admit they didn’t know what they were getting into without traditional auditions or scripts.

Cumpsty recalled Sheahan’s instructions as the group gathered for the first time.

Maggie Lindsay, who was invited to join the cast by Jarvis, recalled the creative process.

“The first few rehearsals we didn’t practice anything. (Sheahan) would ask a question or give us a news article. We’d have five minutes to write something — a question, article or response. Then, he separated us into groups and said ‘Make a piece about this.’ It was very different.”

Jarvis said the result is a series of scenes around a theme, rather than one story. She said while residential schools are touched on, there are also perspectives about missing and murdered women, water quality on reserves, the Indian Act, and stereotypes.

“It’s not just things that happened in the past. It’s things that still happen today,” she said.

The goal, she noted, was to get people talking.

“It is something that can definitely be a spark to a flame to get the conversation going and hopefully people will have a more open mind set.”

Cumpsty added the students realize “one show ain’t going to save the world, but it will get the ball rolling.” He also said there’s something different about non-Indigenous teenagers offering their perspective.

“One of the more important things is this whole production is from a non-Indigenous perspective. There’s no cultural appropriation. We’re not pretending to be who we’re not. We’re ourselves, but we’re talking about these issues in an appropriate way,” he said.

Lindsay added the topics depicted might encourage audience members to go to Tyendinaga or elsewhere and learn what could be done as part of a broader reconciliation.

One of the gripping lines in the show talks about the next generation preferring to have questions that can’t be answered than answers that can’t be questioned — and this work is a start toward that understanding.

The Hastings and Prince Edward District School Board’s Indigenous education co-ordinator Troy Maracle watched the show and Sheahan said he offered positive feedback. During that session, all 14 cast members also shared they had learned something they didn’t already know as part of the creation.

Sheahan said each performance will be followed with a question-and-answer period, even among adult audiences.  He said tough conversations have to happen to move forward.

“As Canadians, we often talk about how polite and kind we are, but our own history is much darker than we give it credit for. It’s not about how bad we’ve done things, it’s about how do we learn from that and go forward together. We weren’t there and we didn’t do this, but the Government of Canada did do this.”

The show will be staged at PECI in the drama room March 27 and 29 at 7 p.m. and at Belleville’s Core Arts Centre March 28 at 7 p.m. There will also be school performances at PECI, Kente, and Athol-South Marysburgh. Tickets for the public shows are $5 each.