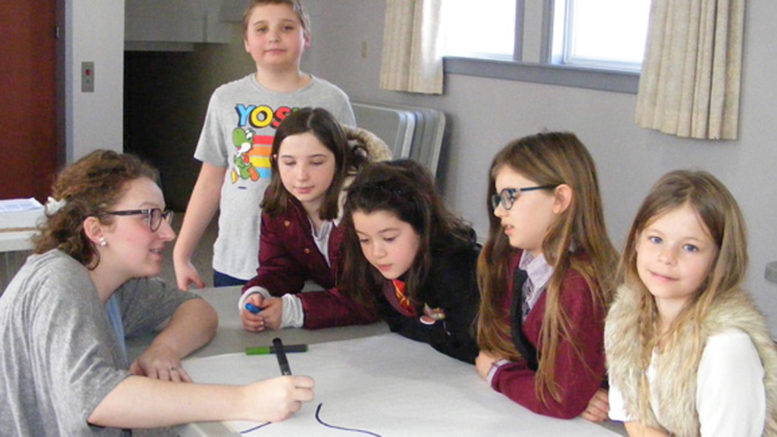 The Picton and Wellington branches of the County of Prince Edward Public Library became part of Hogwarts School of Witchcraft and Wizardry as the world of Harry Potter became the focus of activities on March 12-16 during March Break. Some came dressed in full Hogwarts School uniforms. 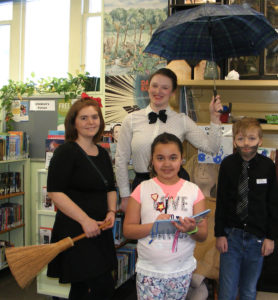 Magic of March Break – A cospay parade at the Picton library branch Saturday was small, but mighty. In front are Violet Dickie, 8, costumed as Claudia Kishi from The Baby-Sitters Club series of novels and 10-year-old Marshall Kingma as dark action-movie hero John Wick. Behind are Joanna Howard (left) as teenage witch Kiki from the Japanese animated film Kiki’s Delivery Service and Julie Lane dressed as Mary Poppins from the new movie. (Terry McNamee/For The Gazette)

Young wanna-be wizards showed up for a variety of special activities based on British author J.K. Rowling’s series of books. One of the most popular was a stop-action filmmaking class with magical creatures called Bowtruckles. In teams of three, the kids wrote their own storylines, made the creatures from green pipe cleaners and did the stop-motion filming to create their own short movie. All the movies were shown during a special film fest at the Picton branch on Saturday.

Other workshops included wand-making, button-making and creating glittery Expecto Patronum bath bombs. The biggest hit, aside from the movie-making, was a Quidditch competition using Sphero robots.There was also a mini-mandrake herbology class.

Ozobots, small round robots, were used on a large sheet of paper where participants created a map for the robots to follow as a section of the Harry Potter story was retold by the kids. They used coloured pens on the route to give instructions to the tiny robots, and the route was marked by important events in the story.

Ember Landucci, age 8, explained that her group was retelling a flashback segment.

“We’re trying to show where Voldemort (a dark wizard) comes in and where James dies,” she said. She explained that Voldemort tries to kill Harry “but the spell backfires and the only one left in the house is Harry. When the robots move, we tell what the robot’s doing.”

Information technology co-ordinator Julie Lane said the week went very well, although numbers were down on Saturday. Some children had been visiting the county during March Break and had left by the end of the week, while calls from parents revealed that some families were hit with a stomach flu that apparently had been making the rounds this month. Even so, the week was a big success.

“It’s very, very busy!” Lane said earlier in the week. “I’m very grateful to all the staff who pitched in to help keep it running smoothly.” 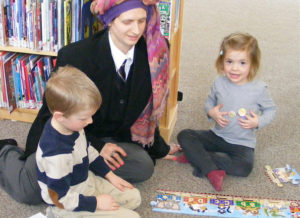 She summarized the event Saturday, noting, “It has gone very well, and it has gone very quickly. We’ve had a great turnout to our workshops. It was a lot of fun to have a big variety of programs. Our stop motion was really popular, and the videos turned out very well.”

She said the Harry Potter craze is showing no signs of slowing down since it first began in 1997.

“It’s really cool to see the younger generation just as interested as I was,” Lane said. “This was also an opportunity for a lot of our staff to be super Harry Potter nerds! It just makes this job even better.”

The final event of the week was a cosplay parade with people in costume. However, with the numbers decimated on the last day, two children did arrive in costume. Violet Dickie, 8, portrayed Claudia Kishi from The Baby-Sitters Club series of novels written by Ann M. Martin, and 10-year-old Marshall Kingma took on a darker character in action-movie hero John Wick. Lane did her bit, dressing as Mary Poppins from the new movie, and fellow staffer Joanna Howard was teenage witch Kiki from the Japanese animated film Kiki’s Delivery Service.