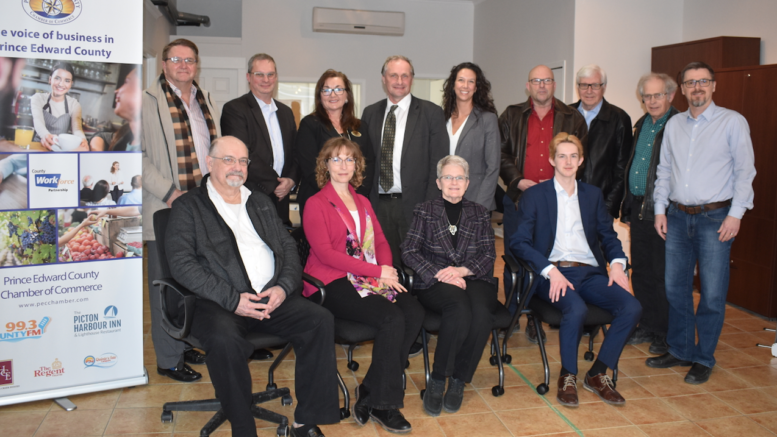 GAINING BROAD SUPPORT- (Centre, standing) MPP for Timismaking-Cochrane John Vanthof visited the Prince Edward Chamber of Commerce on Thursday to meet with local business leaders. The NPP deputy leader visited Picton as part of a tour pledging his party's support for the expansion of broadband into rural and northern Ontario. (Jason Parks/Gazette Staff)

The deputy leader of Ontario’s New Democratic Party made a stop in Picton on Thursday to meet with local business leaders and pledge his party’s commitment to see broadband internet service expanded into rural parts of Ontario.

John Vanthof, MPP for Timiskaming-Cochrane and the party’s Agriculture and Rural Development critic , stopped by the Prince Edward County Chamber of Commerce to speak with local business leaders as part of a tour of eastern Ontario.

Chamber of Commerce Executive Director Lesley Lavender was enthused by the turnout of no less than a dozen local business people and the great conversation members were able to have with the touring MPP.

“There are definitely gaps in service and limited ability for high speed in certain areas of our rural community so it’s a challenge for our businesses because internet has fast become an essential basic service for all and especially in order for businesses to grow and become competitive in these new market places,” Lavender told the Gazette. “John was able to get some first hand knowledge of the struggles we have locally.”

During the discussion, Vanthof, a retired dairy farmer who was first elected to the Ontario legislature in 2011, recalled that the introduction of internet service in his riding six hours north of Toronto was intended to be a great equalizer for businesses and individuals.

But in fact, it’s caused disparity amongst constituents in his riding and other places in rural Ontario as pockets where broadband and cellular are readily accessible advance and grow while those outside the circles of ever improving connection speeds tend to get left behind.

And Vanthof had always assumed this was an experience for Ontario’s North. 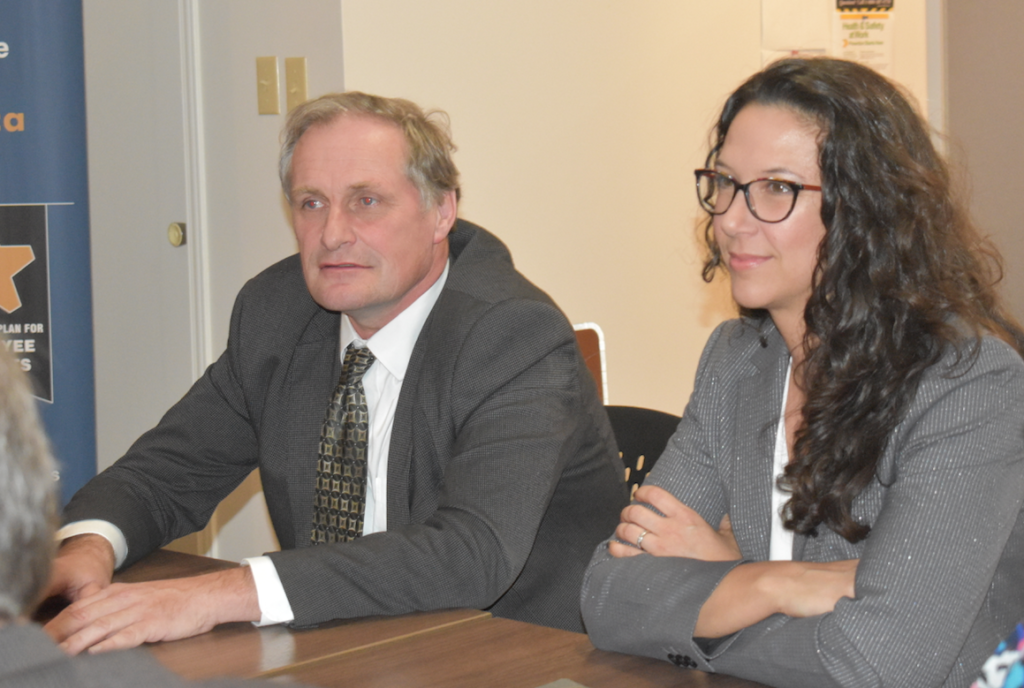 “Myself and my constituents always assumed lack of broad band and lack of cell service were a northern experience and everything south of Parry Sound was just perfect but sadly, I’m learning that isn’t the case in southern rural Ontario as we share a lot of the same issues, problems and struggles,” Vanthof told the Gazette. “Tours like this further reinforce that rural areas across the province suffer with a lack of cell service and lack of broadband.”

The week-long tour was undertaken by Vanthof to speak with rural Ontarians about the 2018 campaign pledge the Conservatives made regarding broadband expansion into rural and northern Ontario.

“During the election campaign, the Conservatives said they were going to cancel the natural gas program and do something different with natural gas grants and the money they would be saving ($100 million) would go towards funding rural broadband expansion,” Vanthof said. “The reason for this tour is to hold the Conservative’s feet to the fire on this campaign promise.”

The provincial budget is expected to be announced Apr. 11.

Vanthof made a motion in the Legislature on Nov. 15 2018  to expand broadband internet into rural Ontario that was unanimously endorsed and the MPP said Ontario could take a page out of Quebec’s plan to expand high speed internet services in that province.

“They’ve committed $100 million a year for the next decade which is good for laying ground work but what we’ve found is that this issue is not just about throwing money at a problem, there needs to be a strategy that identifies the opportunities and roadblocks,” said Vanthof.

During the tour Vanthof heard first hand from a number of regional internet companies and those companies offered their views on what was standing in the way of making broadband more accessible to remote and rural areas and that an expansion should ultimately level the playing field for what is becoming an increasingly online business world.

Vanthof explained it was almost impossible for businesses to be competitive without broadband internet access.

“Accounting programs are cloud based now, so if you are working from home and your connection is unreliable and you can’t access it at the speed and the reliability that you need to, you aren’t going to start that business in that part of the province so whole regions are missing out on attracting and building a business base,” he added.

Another wrinkle in bringing broadband closer to all Ontarians was the recent pledge made by the Ontario government that secondary students would soon be taking online courses and one of those students with a keen eye to what lays ahead is PECI’s Cole St. Pierre.

St. Pierre is Co-operative Education student spending part of his day at the chamber office and confirmed that even now, prior to the launch of online E-courses, studying and using the internet for school work between the hours of 4-11 p.m. Are problematic at his house.

“I have to make sure no one in my house is using the internet and maybe I can go online and complete my school work,” St. Pierre said.

“Broadband access is a huge factor for the students at PECI and currently it’s not equal access for everybody and those that can’t access it will fall farther behind,” Lavender said.

A figure near and dear to every NDP’ers heart and even to those Canadians who are able to walk out of a hospital without paying out of pocket for medical care costs is Tommy Douglas and Vanthof explained that before the former Premier of Saskatchewan brought socialized medicine to Canada, he was instrumental in transforming the economy of the province.

“Before he brought forth the plan for socialized healthcare, as premier he brought electricity to the back roads of Saskatchewan,” Vanthof said. “He knew that unless the farmers had access to the modern technology of the day, they would never be able to contribute to the economy and make that province great.We are at the same stage with broadband in Ontario. Unless we see a day when everyone has access to it, we are never going to be able to fulfil the what we a can do for the province and our families.”

Vanthof also took time to speak about recent rumblings about changes to the way Ontarians access their healthcare and a potential influx of privatization into the process.

The MPP said a total restructuring of healthcare administration without public consultation and big gaps in the legislation to allow for private companies to move in even more was worrisome.

“Premier Doug Ford is no Tommy Douglas. We have people in hallways of hospitals waiting for treatment and are there problems in our system right now? Absolutely, but there’s nothing in this legislation that’s going to get them out of the hallway,” Vanthof said. “Creating a super agency that’s really accountable to no one and allowed to amalgamate private and public sector without any input or proof that it’s going to make things better for Ontarians is really indicative of this government and how they’ve operated.”