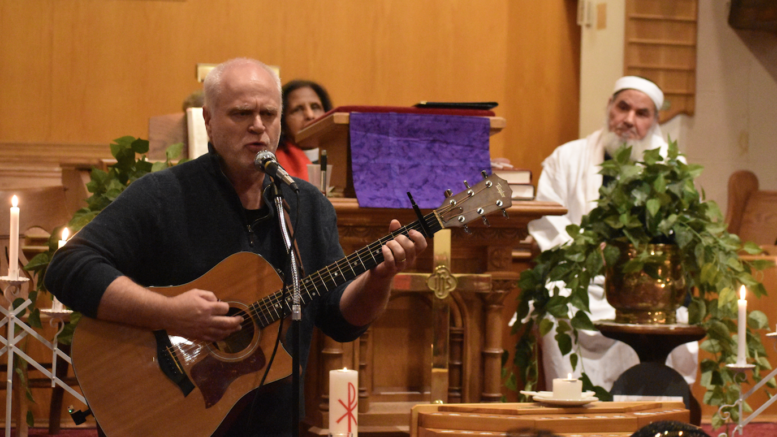 It seems just like a short while ago, spurred on by the scenes of human devastation a world away, that people flocked to Bloomfield to express their shock and feelings of helplessness and pledge to make things better.

But that’s the funny thing about the passage of time.

Your mind can tell you that it was just a year or two ago that, after the haunting picture of the body of little Alan Kurdi washed up on a beach in Bodrum, Turkey made the Syrian Refugee crisis real in the hearts and minds of most Canadians and brought about an action of welcoming not seen in this country in many a year.

Surely it couldn’t have been more than 18 months ago that Carlyn Moulton and a group of people aiming at making a safe haven in Prince Edward County for a family of Syrians displaced in Lebanon gathered at the Bloomfield Town Hall and started down a road that would eventually lead to this community supporting the Al Jassem’s and their extended family airlifting them from a war torn region.

However, it will be four years this fall that about 75 caring and concerned people gathered in Prince Edward County and indicated their want to foster a safe haven for a family in a land far away from the bullets and bombs in Syria.

And while these points of light undertaken by humanitarian hearts in countries like Canada and New Zealand would surely seem to combine to eliminate the realms where the darkness of racism, hatred and bigotry fester, we now know that all those that seek world peace in our time must be vigilant when the dark seas that hold all these sickening views start to roil.

From vigil comes vigilant and if there’s a method or function that will eliminate the darkness that brings about the massacre in Christchurch, NZ where an act of terrorism resulted in the killing of 50 Muslims worshiping at two mosques, it must surely start with what took place all over the globe and in Prince Edward County last week. 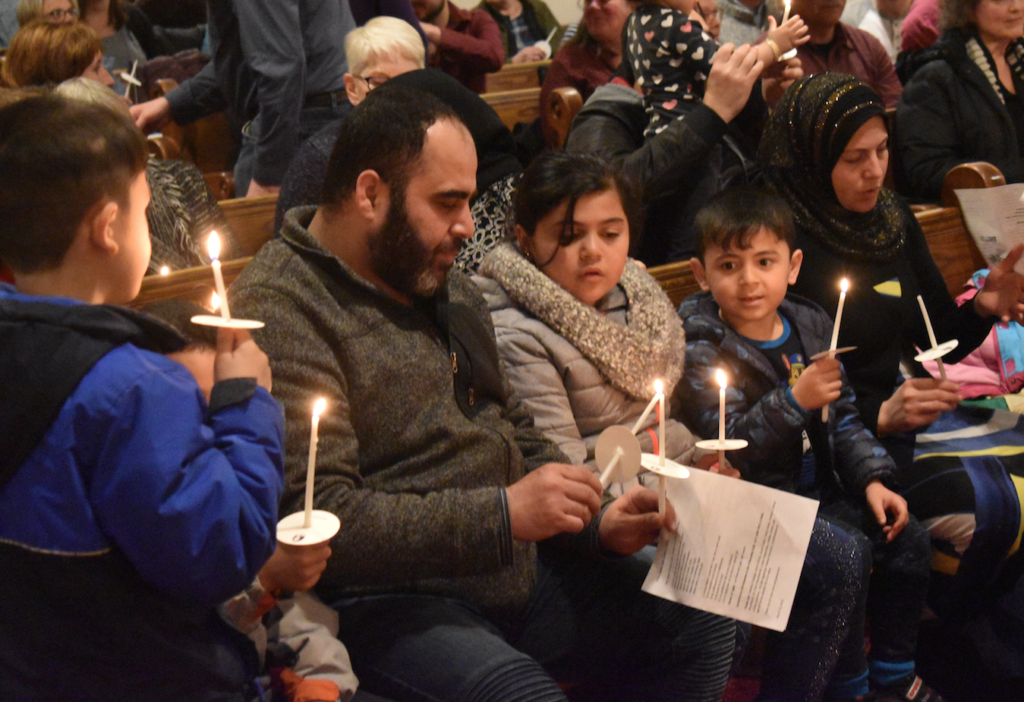 The Mustafa family lights candles in memory of those murdered in the terrorist attacks at two Christchurch Mosques earlier this month. (Jason Parks/Gazette Staff)

Friday’s Bloomfield Peace Vigil was one of at least two such like local events meant to be a response to the horrific attack on the two mosques and a show of support for Prince Edward County’s muslim families.

Over 200 people came together at the Bloomfield United Church on Friday evening to stand together with neighbours and friends to denounce hate and intolerance as well as to remember those lives lost in the shooting through the lighting of candles, signing of hymns and versus and the reciting of blessings of peace.

Reverend Aruna Alexander of Bloomfield United and Imam Mohammad Saleh of the Belleville Mosque came together to offer a joint Universal Prayer of Peace.

Alexander prayed for a peaceful world and called for wisdom and compassion within the hearts and minds of all local and world leaders who have the power and the responsibility of making decisions that impact the presence of peace.

Imam Saleh prayed for courage, dedication, and integrity within the spirits of all those who work for peace around the world.

“We pray for all those who harbour thoughts and feelings of hatred, violence, and greed, that their hearts, minds and souls will be transformed into Your likeness of compassion and kindness,” Saleh said. “We are thankful for your presence within our lives and ask for Your blessing, as we live peaceful lives and seek ways for all people to live in harmony and peace.” 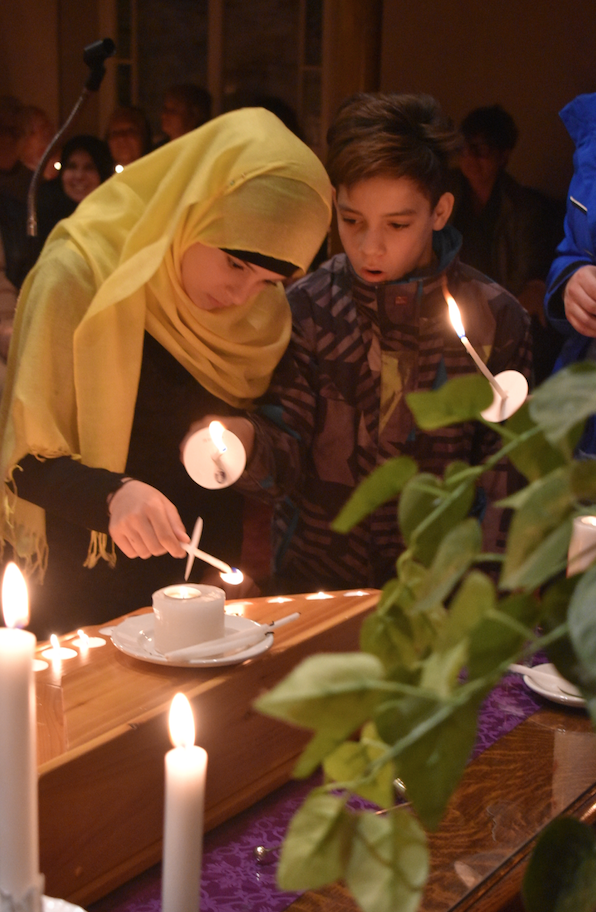 Moulton and Ramez Al Jassem both brought forward incredibly poignant remarks as part of a contribution from the PEC Syria group.

Moulton spoke to the global reaction to the tragedy and utilized the words of New Zealand’s Prime Minister Jacinda Ardern to condemn these actions.

In her initial response to the massacre, Ardern said Christchurch was a place of choice where people came to raise families and be part of communities who they loved and who loved them.

New Zealand was a place that many came to for its safety, a place where people were free to practice their culture and their religion.

“We were not chosen for this act of violence because we condone racism, or because we are an enclave for extremism. We were chosen for the very fact that we are none of those things,” said Moulton, repeating Ardern’s words. “Because we represent diversity, kindness, compassion , a home for those who share our values, a refuge for those who need it. And those values, I can assure you, will not and cannot be shaken by this attack.”

Moulton said two values were underlined: compassion and support as well as the strongest possible condemnation of the ideology of the people who did this. 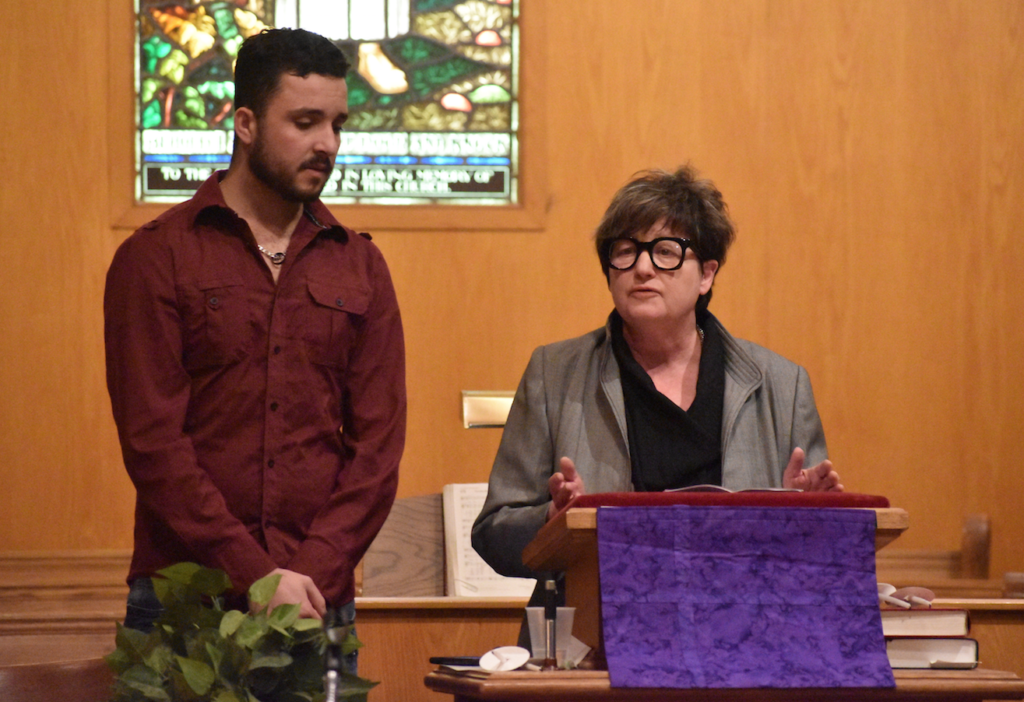 “I have walked the streets of Christchurch. New Zealand is much like Prince Edward County. It’s made up of small communities where people look after one another, where they don’t much care who you are or where you are from as long as you work hard, stop if you see someone in need, look after the place and can tell a good story. And those small towns and cities have a long history of thriving because they have embraced and made room for people who have come there over many years. As a relative newcomer myself to this community, I have been impressed by the very same values that (Ardern) described – diversity, kindness, compassion, a home for those who share our values and a refuge for those who need it,” Moulton said.

“The first mosque was built in Canada in 1938, just a few years before the first mosque was built in New Zealand. The Al Noor Mosque where this shooting took place was built over thirty years ago. I am taking a moment on this because we have recently heard talk about immigration and refugee movements across borders as if it was new, potentially dangerous, an emergency to be stopped. Not just from the uneducated or the ignorant, but from political leaders who should know better. The emergency is not about finding ways to keep people out. The real emergencies – the disasters caused by climate change, civil wars, discrimination and oppression of women, or gays and lesbians, or particular tribes or ethnic groups – these are the emergencies that need to be stopped. The number of people who are being forced from their homes, fleeing for their lives and to protect their children has grown to an astonishing number – by some estimates over 68 million globally – and they must be given refuge, an opportunity to find a new place to call home.”

“Looking at the world where disasters caused by climate change, civil wars, discrimination and oppression of women, or gays and lesbians, or particular tribes or ethnic groups have displace citizenry in droves almost since the start of recorded history prove immigration and migration is not new – to either New Zealand or to Canada. “But what is particularly disturbing are the racist calls to action that are found not just in the manifestos of psychopathic killers. They are on our airwaves, on twitter and facebook; they are the voices of politicians that are increasingly mainstream, the voices of religious leaders who assert the primacy of their religion over others,” Moulton said. “I believe that the best way that we can show our grief and our respect for those who have died is to call their murder what it was – a cowardly racist act.”

Moulton said she was incredibly grateful for the generosity of spirit in this community, a concrete condemnation of racism that we have seen in all the volunteers with PecSyria, who have dedicated time and energy to welcome the Al Jassems and the Moustafa and Dandl families, through affirming acts of love, acceptance and friendship.

“No longer refugees. You are a part of this community. We are us. To quote John Lennon, you may say Im a dreamer but looking around I see Im not the only one. Imagine all the people, living life in peace. In honour of the many dead, we cannot abandon the hope that someday the world will live as one,” she added.

Ramez Al Jassem recalled living in the Syrian war zone with his family and it seemed that they were always running from the war.

“It was a hard time for us,” Ramez said.

Recalling the families long trip to Canada, Ramez remembered leaving everything -family members, friends and the family pets- behind.

“The first night in Canada, the tears come and my cheeks are wet,” Ramez remembered.

Through extraordinary effort by the PEC Syria volunteers, the Al Jassems slowly started to feel more at home and the Ramez’s brothers and sisters started to take classes at local schools.

Ramez spoke of making friends at PECI and mentioned one day one of his best friends came to him with some unfortunate news.

“He told me ‘My grandmother, she hates muslims’ and, after I met her, I changed her mind completely. People can change their minds,” Ramez said.

Writer’s note: This story has been edited to correctly capture the number of attendees.