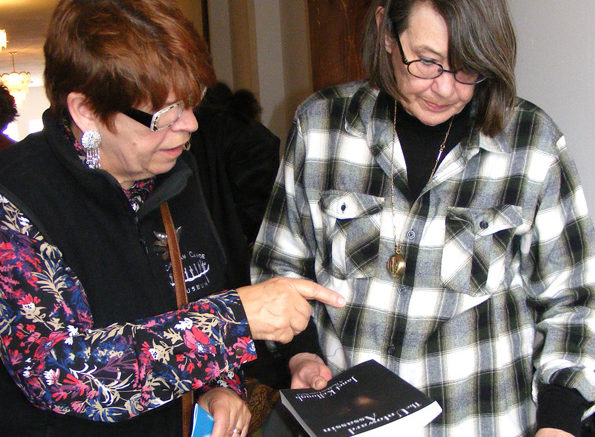 Another thriller - On Sunday, Sarah Hall (left) of Picton chatted with local author Janet Kellough about her latest mystery novel, The Untoward Assassin, during a book release at the Picton Library's Pop-Up Shop. The novel was released March 2. (Terry McNamee/For The Gazette)

The Rev. Thaddeus Lewis was a Methodist circuit rider, or travelling minister, in the middle of the 1800s, and his name is remembered today because of two events. In 1865, after retiring in Picton, he published his autobiography, and some 140 years later, a local author named Janet Kellough stumbled across his book at the library.

“He was a real character!” said Kellough, and when she discovered his involvement in solving a murder, she knew she had found the person she needed for her newest book. It was published in 2009, and was called On the Head of a Pin: A Thaddeus Lewis Mystery.

“I thought it was just going to be one book, but my publisher wanted more,” Kellough said. “(Thaddeus) ended up being this fascinating, complex man. It seemed an ideal way to tie into that history and bring it alive.”

On Sunday, March 24, Kellough was at the Picton Library’s Pop-up Shop to talk about the newest in the series, The Untoward Assassin. The seventh Thaddeus Lewis book takes place in 1855 after the death of his beloved wife. The travelling preacher finds himself under attack by a potential killer who is threatening not just his own life, but the lives of his family, and he must solve several puzzles in order to save himself and those he loves.

Kellough said the series follows the minister’s life over a couple of decades. In each book, Lewis gets pulled into cases involving dead bodies and has to discover whether murder is to blame. Kellough said she is always careful to provide a realistic reason for him becoming involved in these cases. But making a mid-19th Century saddlebag preacher with a world view of those days appealing to modern readers has been a challenge.

“He evolved hugely (in the series),” she said. “I really had to adjust his attitudes to make him palatable to the 21st Century. I had to make him a lot more modern.” What did not change was his inherent decency. “He’s a very ethical man,” she said, speaking as if he is still alive — which, in a sense, he is, thanks to her books.

“His story really speaks to aging, because when we start off in the first book, his wife is ill,” she said. But in book three, his wife dies. “He adored his wife, and now she’s not there any more, and he has to work through that,” Kellough explained.

She added that many of her readers can identify with this kind of loss and the burden it places on people.

“I think they find that very relevant,” she said.

However, not all is lost for the reverend.

“In the last two books, I’ve been able to provide him with a love interest, but she’s a very unsuitable love interest, which makes it fun,” the author said. Kellough has written four other books in addition to the Thaddeus Lewis series, the first being released in 2004, and she is currently working on her twelfth book. She said her favourite of her books is The Bathwater Conspiracy.

“It is so different from anything I had done before — it is speculative fiction,” she said.

“I’m seventh generation,” she said. In addition to her theatre background, Kellough previously worked as the editor for The County Guide and as a local community reporter. She is the only writer in her family, but said her father and other relatives were well-known storytellers.

While the fictional Lewis has a wide variety of adventures, the real man led an interesting life, too. He served in the War of 1812 as a soldier in the Glengarry Regiment, during which he came close to death from serious illness on numerous occasions, was shot by American soldiers and taken prisoner, was repeatedly wounded by a sword wielded by a British officer (who mistook him for an American), and dodged death on the battlefield a few more times before the war was over. His lively autobiography is available at the Picton Library, and you can also read it online at https:// archive.org/details/cihm_45533/page/n7

For more about Kellough and her books, check out her web site at www.janetkellough.com.