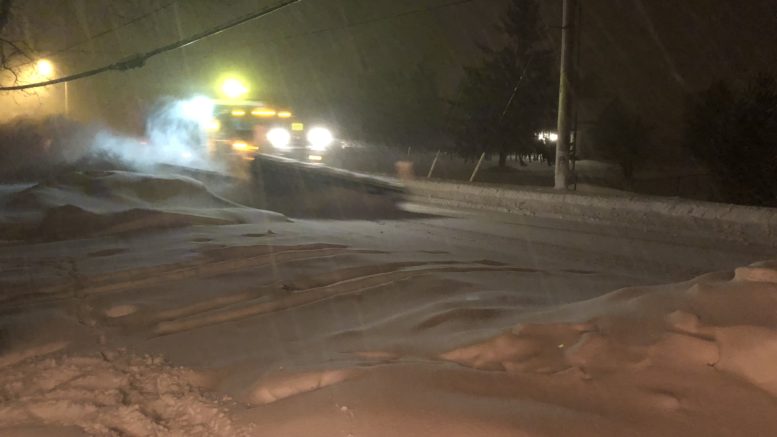 In move to take back more snow maintenance routes, rely less on contracted companies and replace part of an aging fleet, council approved a motion at Thursday’s Committee of the whole meeting to purchase four new International sander/plow/dump trucks at a cost of $1.090 million.

The contract was awarded to Tallman Truck Centre and the motion still needs to be ratified at the Apr. 9

The 2019 Capital Budget included an allocation for the purchase of four new 2018 or 2019 4×6 wheel drive sander/plow/dump trucks with winter implements and the purchase will not only improve the County’s fleet of winter maintenance vehicles in terms of reliability but will also allow drivers to have shorter routes next winter and improve response time.

Late last summer, the previous council initially received a single tender for the municipality’s ten contracted winter maintenance routes and the offer was higher than expected.

After searching, the County was able to contract QBT of Brighton who were able to take half the contracted routes in 2018-19 while the municipality attempted to conduct winter road maintenance on the other five routes.

According to a report submitted by the municipality’s roads department, the lowest of the three bids was submitted by Premier Truck Group although it was not accepted as the truck models did not meet the County of Prince Edward’s requested specification for front axle configuration.

Tallman Truck Centre was the next lowest submission and was in compliance with the Municipality’s requested specifications and was therefore the lowest qualified bid.

Two of the four trucks will be outfitted with a salt pre-wet system at a cost of around $10,000 per truck.

The report indicates that pre-wetting road salt with a brine solution begins a chemical reaction that accelerates melting for application on the roadways and that pre-wet salt granules bounce less when hitting the pavement therefore allowing for greater control during application.

“This method creates an improved material efficiency, saving time and money. A salt pre-wet system, which was outlined in the tender as a provisional item, is also recommended to be installed on two tandem trucks at a total additional cost of $20,470.00 excluding taxes,” the report explained.

With the addition of the provisional salt pre-wet system on two tandems, the lowest qualified bid from Tallman Truck Centre becomes $1,090,037.88 excluding taxes.

As is typically the case with any type of vehicle purchase by the municipality, the question as to does the County of Prince Edward really need this purchase at this time arose at the horseshoe on Thursday.

Bill Roberts, after hearing some scuttlebutt in the public prior to the meeting, played devil’s advocate.

Acting roads department manager Pat Heffernan said a pair of 2001 model trucks will be replaced immediately as there were doubts if the service vehicles could pass a road worthiness inspection this fall and another pair of vehicles that were 2004-era would be moved into back up roles.

Heffernan added the purchases would allow the County to shorten the extended plow routes from 10-12 hours down to sic hours return which would improve service.