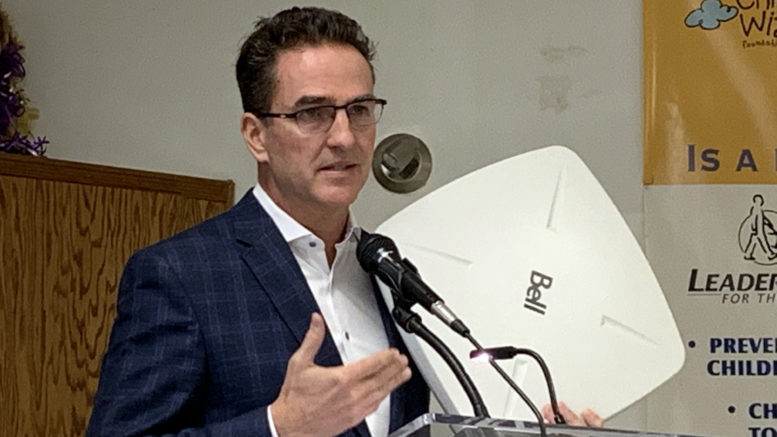 New technology - Bell vice-president of product development and management Shawn Omstead shows off a new wireless antenna that can pick up a radio signal from within a 10-km radius of existing celluar towers. (Adam Bramburger/Gazette staff)

Bell Canada announced Friday it will leverage its public-private partnership with the Eastern Ontario Regional Network (EORN) to bring high-speed broadband access to 1.2 million homes in the region.

Between 2010 and 2015, the telecommunications giant played a key role in putting in a backbone of 5,500 km of fibre cable in the ground across the region with the support of local municipalities, the province, and the federal government. Now, it’s building on that work.

That morning, in Frankford, Bell’s vice-president of product development and management, Shawn Omstead, announced the company would be leveraging the fibre network and its existing cell towers to supply its new Wireless Home Internet service to residences and businesses  at up to 25 megabits per second (Mbps).

He explained the company is mounting new radio transmitters on its existing cellular towers that will connect with antennas that can be mounted directly on the outside of a house.

“This is next-gen technology,” Omstead said. “Even at 8 p.m. when everyone is on the network, we’re still delivering 25 Mbps to the home. The biggest difference is we’re architecting from the ground up, using fibre delivered to the cell tower and it brings all the right amount of bandwidth we deliver through this.”

While many areas are expected to have access by the end of the year, Omstead said the whole program roll-out could take five or six years to complete.

The advantage of fibre, instead of microwave — a technology that relays a signal to towers not directly connected to fibre, Omstead says  is that more capacity is available directly, so that in the face of more users, the provider doesn’t have to throttle its services — essentially slowing speed in the face of busy traffic during peak hours when more people are online or streaming.

“When you have fibre, you can keep pushing more down the pipe as customers grow,” he said.

Advancements in technology have also helped Bell roll out its service. 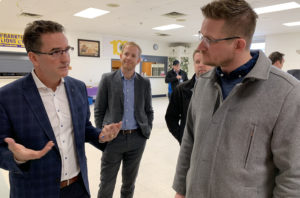 “Obviously there’s a level of density we need, but we’re finding that whenever we have a  cell tower that we’ve put fibre to, the cost to put a radio on that tower is not so prohibitive. In the past, if you had to build a tower specifically for this, it would have prohibited rolling this out,” he said. “The distance needed is up to 10 km (from a tower) we can actually hit quite a few people.”

Omstead said even in the last six months, the technology has improved to handle more simultaneous connections at one time.

“It’s an interesting inflection point, the stars have now aligned. It’s a perfect positive storm for us to roll this out.”

Already communities across Lennox and Addington, Hastings, Prince Edward, and Northumberland counties are coming online. Bell will be offering its service to homes and businesses, starting at $69.95 a month with a $99 installation fee. Omstead indicated that installations in areas with the service will be completed within one to two weeks.

“Without the fibre, this community and all communities wouldn’t be able to benefit from where the world is going, which is a 5G world. If we didn’t have that fibre backhaul and the fibre in this community, we actually wouldn’t be doing what we’re here to do today,” he said. “We wouldn’t be here because we couldn’t make the bandwidth work. That partnership was key, we just wouldn’t be here without it. That’s the bottom line. “

Hastings County Warden  Rick Phillips  has been on the EORN board of directors for several years as a member of the Eastern Ontario Warden’s Caucus. He credited Bell for furthering the organization’s vision to provide better access and higher speeds for all residents and businesses.

Phillips said improving communications infrastructure is a continuous effort on behalf of many partners at all levels of government as well as private-sector providers like Bell and competitor Xplornet, which partnered with the federal government for its own multi-million-dollar project in the area recently. Announcements like Bell’s aid economic development, he said.

“We have a lot of calls from people coming to the township who want to know if they can get service because they work out of the house. More and more, that’s happening and we want to try to accommodate that type of resident. If they’re coming from Toronto, they’re 45 years old and they want to move to a rural area to start a business, we want that to happen. We’re constantly pushing to try to ensure we get the services we want and need.”

Phillips acknowledged there are still gaps in rural areas, both in wireless broadband service and in cellular service. He noted EORN continues to try to fill the gap by working together with government and business.

In Prince Edward County, a tower near Bloomfield was one of the first across the region to be active. On Monday, another tower in Demorestville also went live, serving Picton and areas north. The County’s director of community development and strategic infrastructure welcomed the news.

“The demand for fast and reliable Internet is increasingly critical to the day-to-day operations of all businesses and the lack of true high-speed Internet has been recognized as a significant bottleneck for expanding businesses in rural areas of our community,” Carbone said. “We’re excited to see increased options for both business and residents alike.”

Picton’s The Source outlet is an authorized seller and can help customers learn if they’re currently in the 10-km radius necessary to receive the signal. Mapping details are also available at www.bell.ca/fastinternet.