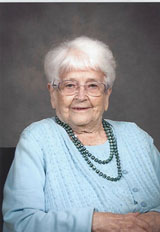 Muriel Emily Callow passed away peacefully at Hospice Prince Edward, Picton, on Saturday, March 30th, 2019 Muriel Emily Callow in her 100th year. Loving wife of the late James Callow. Dear mother of Marilyn Jenkins, Mary Dunlop (Jim), Susan Walmsley (Jim), Robert Callow (Fran) and Cheryl Holmes (Hugh). Fondly remembered by her many grandchildren, great grandchildren, nieces and nephews. Muriel was an active member of her community through her work with the St. Andrew’s ACW, Wellington Women’s Institute and the Wellington Legion Br. 160. She will be warmly remembered by all who knew her. The family would like to extend their thanks to the staff of PEC Memorial Hospital and Hospice Prince Edward and to Muriel’s PSWs for their care and support. As per Muriel’s wishes cremation has taken place. A visitation and Memorial Service will be announced at a later date. Memorial Donations to the St. Andrew’s Anglican Church, PEC Memorial Hospital Foundation or Hospice Prince Edward would be appreciated by the family. Arrangements entrusted to the Ainsworth Funeral Home, 288 Noxon Avenue, Wellington. Online donations and condolences at www.ainsworthfuneralhome.com