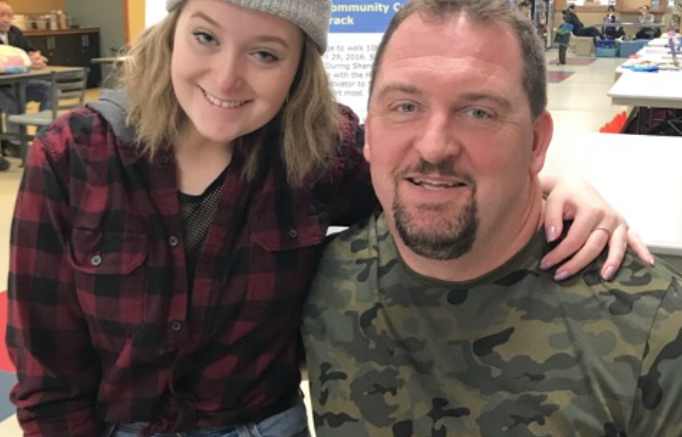 The efforts of a local man undertaking a 10 km walk around the track at Lehigh Arena late last month has netted a local family over $4,000.

Picton’s Shane Wilkinson, a survivor of a nearly catastrophic workplace accident three years ago, took on sponsors in a 10 km trek around the track at Lehigh in support of Abigail Heffernan and the Heffernan family.

The PECI student has been battling Acute Lymphoblastic Leukemia for the better part of five years and, after a round of treatments and period of remission, Abigail is once again dealing with the bone marrow cancer and is undergoing treatment in Kingston.

Wilkinson developed a special bond with the Heffernan family at Kingston General Hospital while he recovered from his work place accident and she was undergoing chemotherapy.

“I was hoping for around $2,000 so to double that amount was fantastic,” Wilkinson said. “I actually had a lot of support from people I didn’t even know or had never met before and that was really awesome. Even afterwards as I was icing down my ankle it was really great to meet people that had kind words for me and wanted to support Abby and her family.”

What ended up being 52 laps around the Lehigh Arena track on March 30 was difficult for Wilkinson but nearly miraculous considering his injury and rehabilitation path.

In the days after the accident suffered in the spring of 2016, it was unknown whether Wilkinson would keep his leg much less be able to walk without assistance ever again.

Wilkinson spent over 50 days in hospital and has been gradually rehabiltiating his leg below his knee while slowly gaining more and more independence.

“Physically it wasn’t easy and I knew I would struggle but it wasn’t until the end that I really started to feel it. Luckily I had a good friend with me in the last few laps and that kept me in the game and focused,” said Wilkinson said of the 10 km walk.

Wilkinson was paid a visit by the Heffernan family including Abigail who was felling well enough to attend the event.

“Given that she’s going through treatments right now, I really wasn’t expecting to see her but we had a great chat and chance to catch up,” Wilkinson said. “I was so happy to see her and have her support me while I was supporting her and her family.”