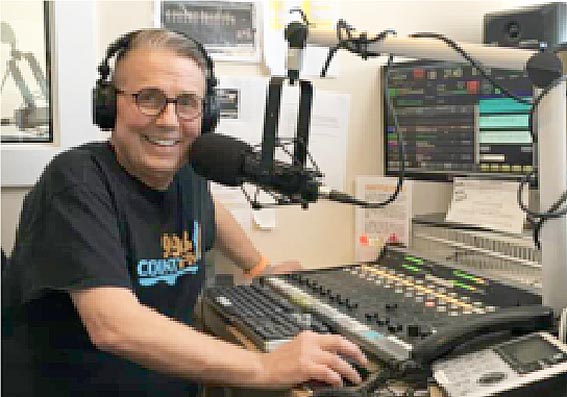 home sweet studio Mark Campbell says his Friday afternoon shifts as a radio host at 99.3 County FM are some of the best times of his week. He has been named the honourary chair of this year’s Radiothon station fundraiser April 25-28. (Facebook photo)

When 99.3 County FM went live on air in October 2014, local optician Mark Campbell was between volunteer gigs and looking for a new way to experience his community.

Campbell’s wife Heather encouraged him to sign up as a host and he’s never looked back., stating that his best Friday afternoons are always spent on the air hosting and playing a mix music that his listeners love. Each time, he says he feels a rush of energy.

While engaged with a public battle with inoperable lung cancer, Campbell jumped on an opportunity to help pay the station back for his experience by serving as the honourary chair of the station’s annual Radiothon fundraiser April 25-28.

He said the volunteer-run station has served as a community builder and enriched the lives of many — both listeners and talent.

“I have grown in knowledge. My trust is the listeners, too, have learned about the diversity of local knowledge and local organizations, there are many individuals who reach out to make this home of ours in Prince Edward County what it is,” he said. “While there are many mediums to hear or read about to engage in our past, present, and future, 99.3 County FM is an option and a source for us to use and be communicated and tuned in.”

Campbell is looking forward to the four days of live on-air performances by more than 40 local musical acts. While they’ll provide entertaining radio, there will also be an opportunity to see those performers live in the studio.

“The buzz that comes from the local talented artists who play for the love of their community and their love for the artistic flair brought to our community gets me excited,” Campbell said. “While entertaining comes at a cost for those of us who seek entertainment — cable television, satellite television, movie theatres, and satellite radio — 99.3 County FM relies on volunteer listener support.”

He added he’s really looking forward to getting the message out that 99.3 County FM is looking to raise money that will help the station repay some of the initial investments that allowed it to establish a studio on Cold Storage Road and get on the air five years ago. To take a leading role in that campaign is an honour for Campbell.

“I am grateful to my 99.3 County FM friends to be asked to be honourary chair of Radiothon weekend,” he said. “I will take it seriously and have fun with it too as “Radio should be fun too!” The Radiothon event will actually kick off fifth anniversary celebrations, which will conclude with a special on-air performance Oct. 14.

“As the new general manager at County FM, I’m deeply impressed by the legacy of support that the community has built around the station and how the station has become an essential service,” he said. “In this fifth anniversary year, it’s vital that we raise enough money to pay off the last of the start-up loan so that we can focus all resources on providing the radio service that county residents need and have come to expect.”

Donations to the station can be made online via 993countyfm.ca or in person at the studio. Donations over $20 will qualify for a tax receipt through The County Foun