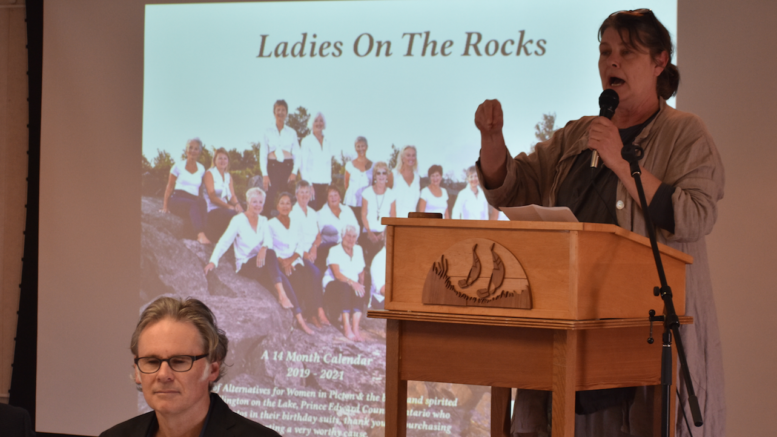 THE LADIES WHO ROCK- With Wellington councillor Mike Harper listening on, Alternatives for Women Chair Caroline Granger speaks to the efforts of a group of women from Wellington-on-the-Lake who bared all in a fundraising calendar that will support the local battered and abused women's advocacy group. (Jason Parks/Gazette Staff)

The ladies of Wellington-on-the-Lake (WOTL) will be ‘rocking it’ in the pages of a calender that supports a local women’s initiative.

The Ladies on the Rocks 14-month 2019-2021 calendar benefitting Alternatives for Women was revealed at the WOTL Sandbanks Homes Community Centre on Saturday morning to media, assembled dignitaries and those that stripped down for a good cause.

The calendar will have a public launch on Saturday at the Grange Winery from 1-4 p.m. and will be available to purchase at various locations starting this weekend.

The calendar, shot by photographer Dave Robinet and printed locally by Printcraft, features a number of WOTL ladies tastefully posed with props to ensure, at minimum, a PG rating.

In her remarks, Ladies on the Rocks organizer Christine Trulsen said the calendar project was akin to the experience of delivering a child much in the special felling of delivery, the hard labour, the anxiety and the joy of holding the ‘baby’ in your arms.

The 2003 British comedy Calendar Girls and finding a way to support the important work of Alternatives was the inspiration behind the project that led to a nearly 12 month process of organizing, fun, work, tears and never ending support to prove that every stage of growth is more beautiful than the last. 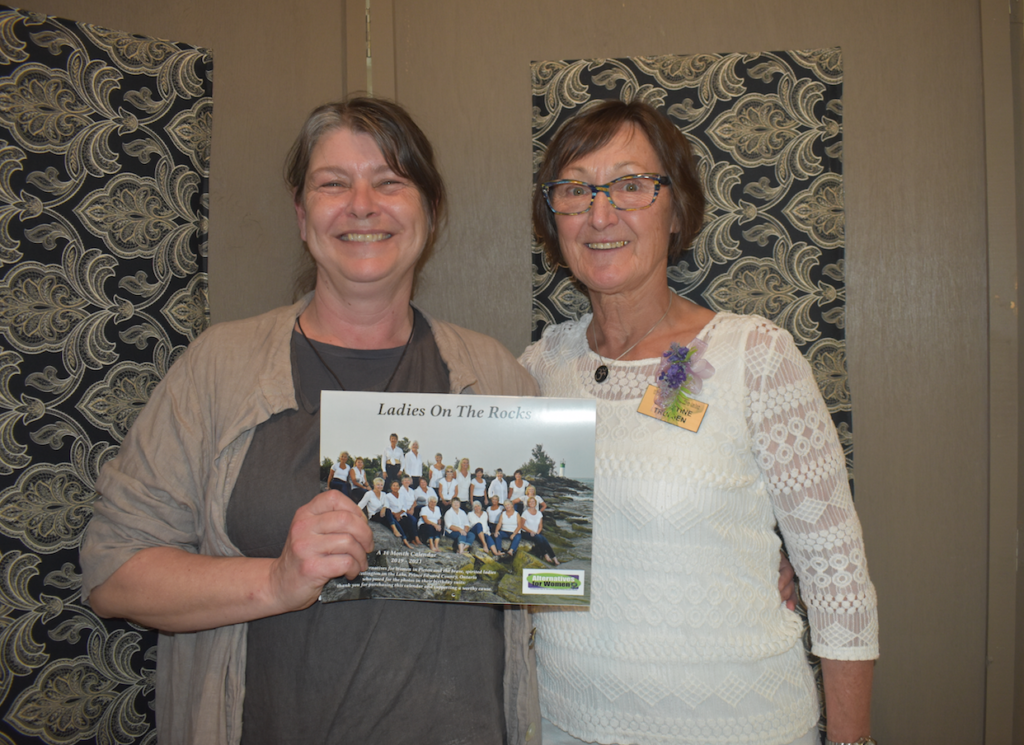 Caroline Granger, Alternatives for Women chair, thanked the WOTL ladies on behalf of everyone in the organization and spoke of the confidential services provided by the group to abused and at-risk mothers and partners in the community.

“On behalf of staff, the agency and our board, thank you for your courage and showing all of us that women of all ages are beautiful. That powerful message will infuse our community and inspire women who need the help to find freedom from shame and make the positive change in their lives,” Granger said.

Spousal abuse and violence against women is a difficult subject to speak at length about and Granger admitted that it’s a topic that’s rarely discussed.

But, sadly, there’s a need in this and every other community across the planet and, until the day comes there’s no longer gender-based violence, there will be advocacy, crisis intervention, counselling and shelter organized by those in the community with a deeper heart and warmer understanding.

Granger offered some uncomfortable statistics and ratios that indicate violence and abuse directed to women in Canada is sadly static, devastating and costly to everyone.

Half of all women in Canada have experienced at least one instance of physical or sexual violence starting from the age of 16 and every six days, a women in Canada is killed by her intimate partner.

Meanwhile, all types of violence are trending downwards over the last decade  but gender based violence remains steady.

“That’s because we don’t talk about it,” Granger said.

Violence against women costs Canadians $7.4 billion annually and that amount is measured from the aftermath of the incident, calculating emergency room visits, loss of income, police and court costs, funerals and other tangible services and costs but does not take into account intangible amounts of pain and suffering that can last lifetimes and alter behaviour in subsequent generations.

“On any given night in Canada, over 3,400 mothers and their 2,700 children sleep in shelters because it isn’t safe to sleep at home but 300 are turned away because there isn’t space,” an emotional Granger said.

The chair explained Alternatives is poised to double the shelter space they currently offer to women in the community but the project is a grand undertaking, certainly the largest by the organization in the three-plus decades it’s been offered in Prince Edward County.

“It’s a little bit scary but having people raise money on our behalf is tremendously exciting,” Granger said. “Thank you to the women who’ve allowed Alternatives to be a part of their life’s positive change because their courage give us hope that we can build a different future and someday we won’t be coming together to talk about this happening in our community.”

Prince Edward County Mayor Steve Ferguson also thanked the WOTL for organizing the calendar and said this initiative would raise awareness of the desperate needs of the those in our community who are under the radar and do not talk about their circumstances,

“This is tremendous what you’ve done and it’s a true community project,” Ferguson said.