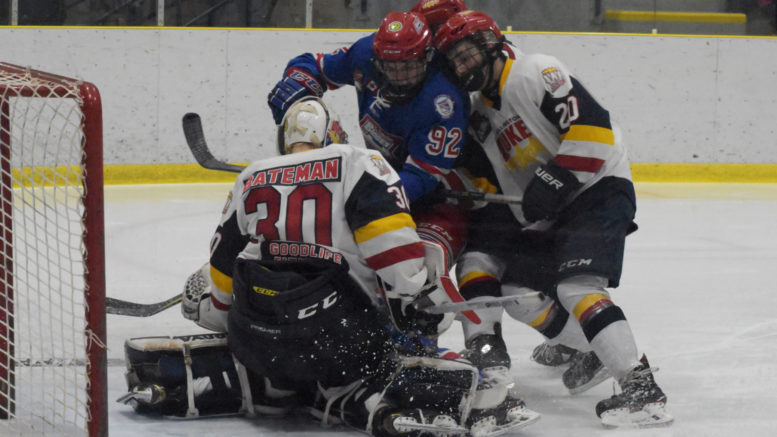 Oakville moves on to 2019 Dudley Hewitt Cup after sweeping Wellington

At the end of the 2019 Ontario Junior Hockey League post season, the best playoff team goes on to represent the 22-team league at the annual Dudley Hewitt Cup Central Canada Championships.

It says here there is absolutely no denying the Oakville Blades are the OJHL’s best playoff team in 2019. 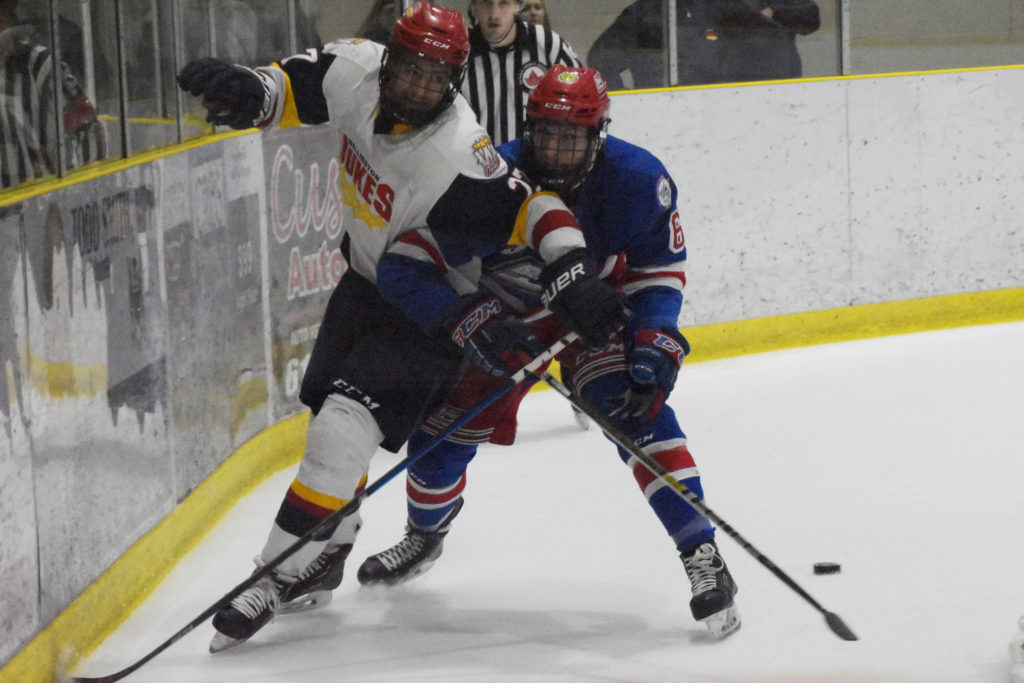 The Blades cut through the Wellington Dukes in four games to sweep away any ideas of a repeat Buckland Cup championship with a 3-2 win in Game 4 Thursday night at Lehigh Arena.

Two back-to-back seven game series in order to return to the Buckland Cup finals was likely enough to hobble Wellington and the Dukes just couldn’t seem to keep up with the bigger, stronger and faster Blades who entered the finals having only played in 15 games to Wellington’s 19 post season contests.

Tired, unable to figure out the olympic ice at Oakville’s 16 Mile Arena and seemingly drawing the ire of the officials every game this series, the Dukes worked valiantly all spring for the chance to defend their 2018 title and, while the Wellington faithful might have wished for a longer series or even an upset, wasn’t this a tremendous run for a team the stumbled through the first half of  the regular season and needed to engineer playoff upset after playoff upset just to reach this stage?

If Dukes fans watched this series and are being honest with themselves, the answer is a resounding yes.

“Since Christmas our team has become a complete unit and jelled with a lot of chemistry,” Dukes Head Coach John Druce said after Game 4. “It’s a very close knit group of players and I feel like getting to this point, we did not give up one ounce tonight. Any other team down 3-0 would have packed it in. We battled right to the end and I’m so very proud of them.” 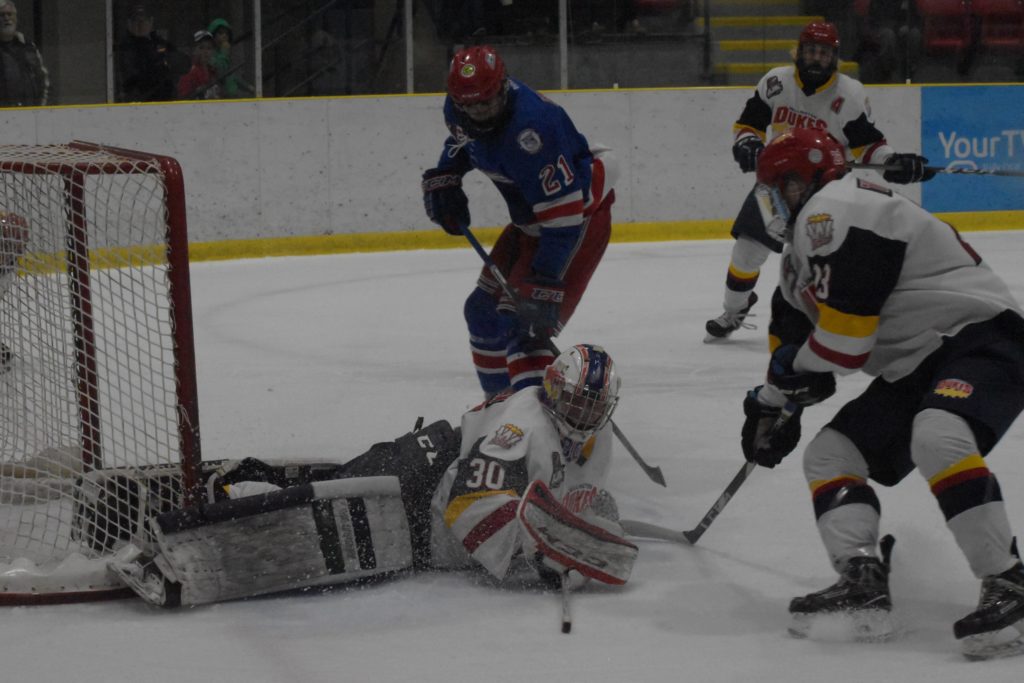 For stretches of the game on Thursday, Wellington was the better team but the momentum couldn’t be sustained and the breaks always seemed to conspire against them.

Of course, with all the bounces and breaks that came with last seasons success, it’s difficult to not shrug your shoulders and figure the hockey gods are making things even.

Take Oakville’s second goal of the game on Thursday evening early in the third period.

After a whistle blew due to an downed player well behind the play and an Oakville puck carrier in the neutral zone, the ensuing face off erroneously came inside the Wellington end.

Druce and his staff pleaded the case the face off should be at the blue line but to no avail.

Naturally, Oakville kept the puck in the Wellington end, cycling it to the near corner and it was Harrison Israels handcuffing Logan Bateman just 2:29 into the frame to break a 1-1 deadlock.

Stunned, Wellington took a needless if not ticky-tack penalty almost immediately after the Oakville go ahead tally and Garret Pyke and the Blades only needed ten seconds to solve the Dukes penalty kill as a screened Bateman was no match for a point blast by the Mississauga native at the  3:20 mark.

As has been their trademark all post season, Wellington battled back, showing the heart of a defending champion that’s wounded but not ready to ease into that good night. 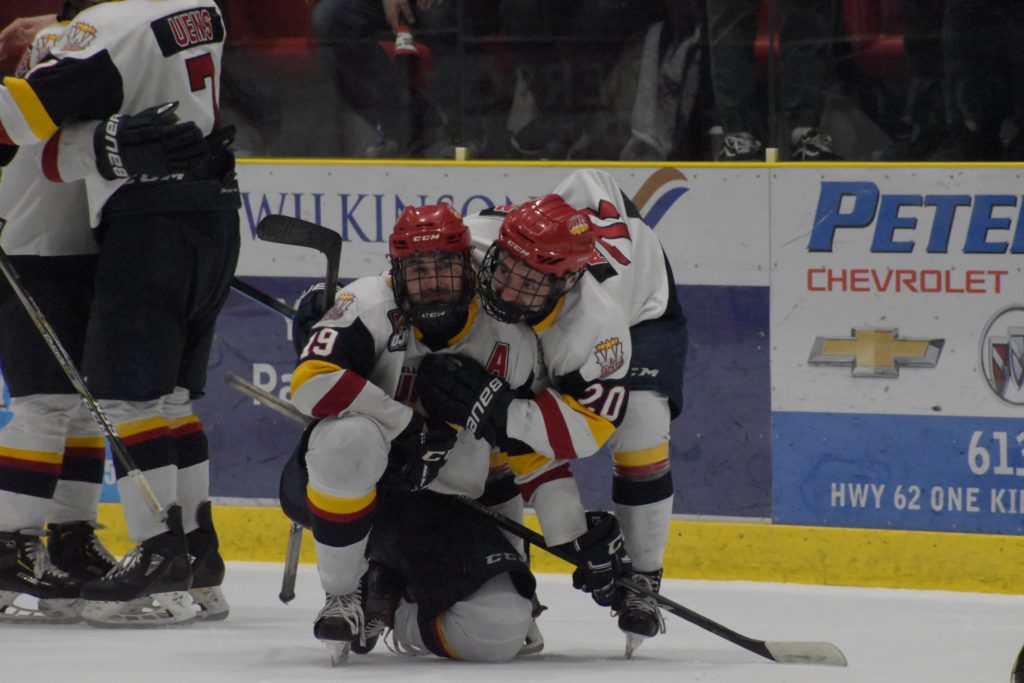 The Dukes would get a power play of their own with just over five minutes left and capitalize one more time with three of their key 2019 post season players combining for a nice man advantage marker.

Tyson Gilmour, who scored Wellington’s first goal of the game and staked the club to a 1-0 lead through the opening period, took a smart Quinn Hanna feed at the face-off dot to Oakville net minder Will Barber’s left and quickly one timed a pass to Elijah Gonsalves.

Gonsalves whipped his stick and wired the feed past Barber with 5:12 left to bring the 870 Dukes fans in attendance to their feet.

Wellington would have a couple of nice chances late to tie it including a deflected puck inside 15 seconds left that looked dangerous for a second or two but skittered wide of Barber.

In the end, the Blades did exactly as they did at the end of Game 2, bending but not breaking in those last crucial moments  and ground out the clock en route their third-ever OJHL championship and their first since 2010.

A despondent Wellington bench looked on as the Blades celebrated on Lehigh ice and the Dukes dreams of returning to the Royal Bank Cup were over.

Druce looked back at the playoffs and said the five game upset in the first round against Cobourg, the 3-1 comeback over Whitby in the East Division Finals and the Game 7 win over the North York Rangers in the Southeastern Conference finals showed the true character and determination that lived and breathed in the Wellington dressing room this spring.

“They just kept on battling every night, whatever we asked them to do, they went out and executed,” Druce said, looking across the ice at the victorious Blades who will represent the league in Cochrane, ON later this month at the 2019 Dudley Hewitt Cup.

“They have four lines that are solid, six defenceman that are very solid and, on top of that, their goaltending was outstanding in this series,” the coach added

The Dukes saluted their fans one more time and that enduring relationship betwixt Prince Edward County and it’s Jr. A hockey team was cemented even further this post season. 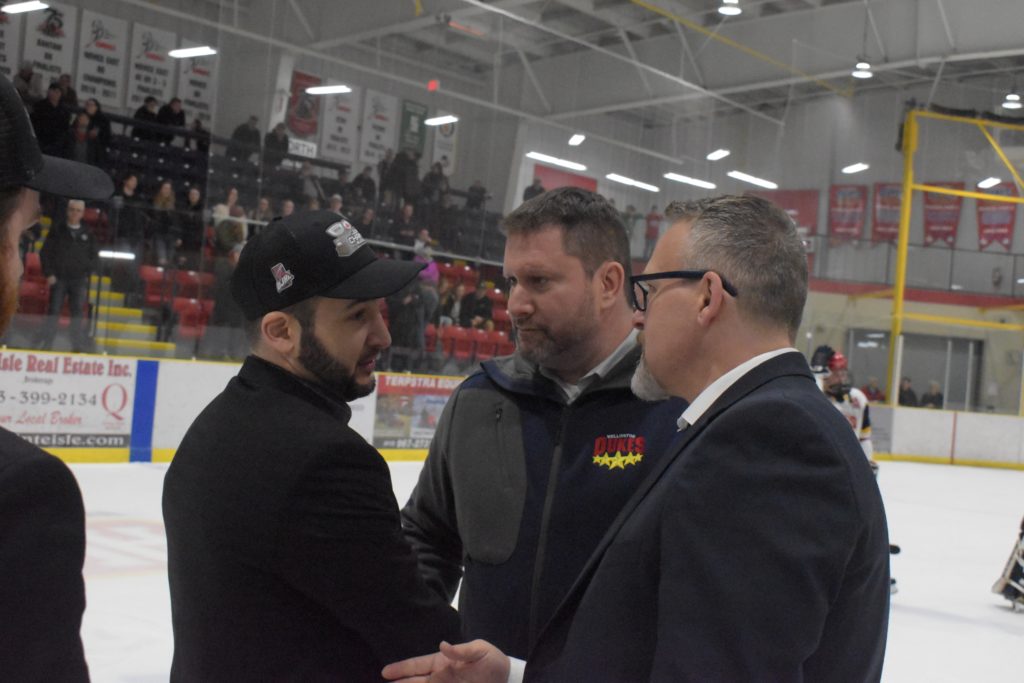 Maple syrup filled with pennies cans were shaking loudly from the puck drop in Game One of the East Division Semi Finals and seemingly never stopped until after the team had vacated the ice for a final time on Thursday night.

The coach was pleased once again by the love this community shows its favourite hockey team.

“It’s amazing to see the building get fuller and fuller and most junior kids at this level don’t get a chance to experience this,” Druce said. “Playing in Wellington is a special opportunity for anyone that plays at this level. Even as a coach, it’s exciting to be here in the building and in these games.”

Vice-President of Hockey Operations Randy Uens said the organization wished to thank the fans for their continued support during another deep post season run.

“We are so happy with the way the fans turned out this post season and there was a return of the buzz in the community that we enjoyed so much last season,” Uens told the Gazette after Game 4. “We’re so proud of how far the players came this season in defence of the Buckland Cup. This team was really built with next season so for these young players to get this invaluable playoff experience as we move to next season is wonderful.”

Wellington Duke Andrew Rinaldi, who was forced to sit out Game 4 after a ridiculous sequence of events at the end of the second period of Game 3 led to his suspension, ended up tied with Gilmour for the lead in the post season points parade.

Each Duke had 27 points.