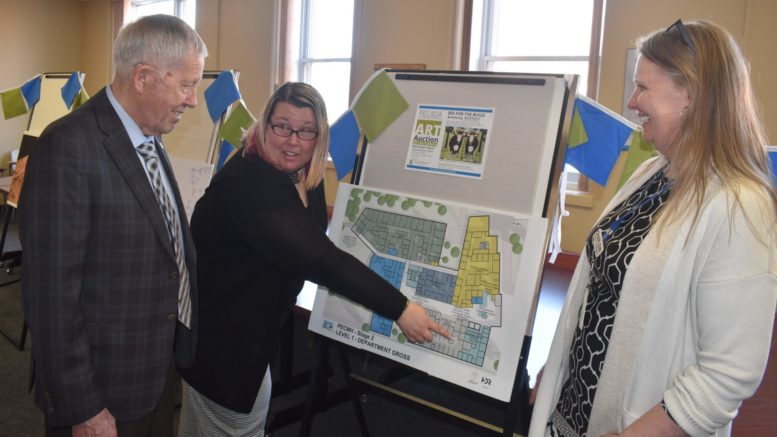 QHC and Hospital Foundation celebrate opening of Hill St. facility 100 years to the day it opened

On April 17, 1919, a nine bed, one operating room hospital at the George Alcorn House on Hill St. was opened and, according to the April 24, 1919 edition of the Picton Gazette, a pleasant break in the bleak April weather on that day was ‘of special consequence in relation to the success of our new hospital’s opening day.’

Community leaders of the day understood that to grow as a community, a hospital in Picton was of upmost need and, through toil, sacrifice and communal good will, the funds were raised to bring about a facility that had ‘an air of hopeful cheeriness and spotless purity of everything in sight‘ and that ‘the money generously donated from all parts of the county and other places had been well used.’

Flash forward 100 years and people in this community are speaking about the next century of healthcare in Prince Edward County, how a newly redeveloped PECMH will serve the populous and what it might mean for the continuation and growth of this island.

Dr. Norma Charier of the Prince Edward County Family Health Team shared some facts from the late Alan Capon’ s wonderful county healthcare retrospective work This House of Healing and said it was inspiring to think of the establishment of the hospital on Hill St.

The physician recalled that on June 8, 1908. a pivotal moment in the direction of healthcare in Prince Edward County took place when the Sir Thomas Picton chapter of the of Imperial order Daughters of the Empire voted top contribute all entertainment money to establish a county hospital

Soon over $10,000 was raised and families made monetary contributions with last names like Bogg, Benson, Leavitt, McDonald, Heaslip, McFarland, Walt, Brown, West and Niles gracing the  the lists of early contributors.

“What was it like to recruit staff and establish a school of nursing in this farming community? Those would have been interesting times,” Charier said.

“What started as a nine room hospital in 1919 quickly expanded as the need for services grew,” Charier said.  “Additions were built and the hospital was thriving. General practitioners were doing just about everything from general practice to obstetrics to anaesthesiology to general surgery and nurses were graduating from the Picton hospital.”

From those early years where doctors and nurses fought influenza, cholera, diphtheria and polio to today where health professionals are experts in continuing complex care with diabetes and cancer being among the conditions diagnosed at PECMH. a legacy of care continues.

Chair of QHC Board of Directors Stuart Wright said leaders of the day saw a need in the community and established, small, modest but critically important facility “because the citizens saw a need and did something about it.”

Wright mentioned long time Foundation chair and PECMH champion Leo Finnegan (who was in attendance and made remarks on Wednesday) moved to Prince Edward County a year after the current facility was erected and “saw it in all it’s glory. It’s still a great place but I wouldn’t call it glory. But on the horizon is a facility that will be glory, serve the citizens and will be a continuation of what we’ve seen in this community for the past 100 years.”

Speaking on beach of QHC President and CEO Mary Clare Egberts, Chief Financial Officer Brad Harrington said the best way of honouring the past was to look to the future and reiterated the organization’s full and committed support of a new redeveloped PECMH.

Harrington said with partners such as the Prince Edward County Memorial Hospital Foundation, the Auxiliary, the Southeast Local Health Integration Network and the Prince Edward Family Health Team working collaboratively and speaking with one voice is generating excitement for the prospects of a new hospital for the county.

“The new hospital remains QHC’s number one capital redevelopment priority and I have no doubt we will be successful,” Harrington said.

This perspective was further reinforced last week when Harrington was invited to take part in the annual provincial lock up prior to the announcement of the Ontario budget.

Health system providers were given the opportunity to preview the budget before it was tabled.

“You can imagine my excitement and delight as I turned to page 115 and 116 of the Ontario budget page 115 outlined $17 billion of hospital and health systems renewal and page 116 a map of Ontario of shows 14 of 16 key projects,” Harrington said. “Who’s front and centre? Prince Edward County Memorial.”

Harrington said QHC eagerly awaits approval to move to stage three of the Ministry of Health’s Capital submission process which will involve detailed designs of the new facility.

In terms of timelines, it’s expected by QHC that the project could be completed as soon as 2025.