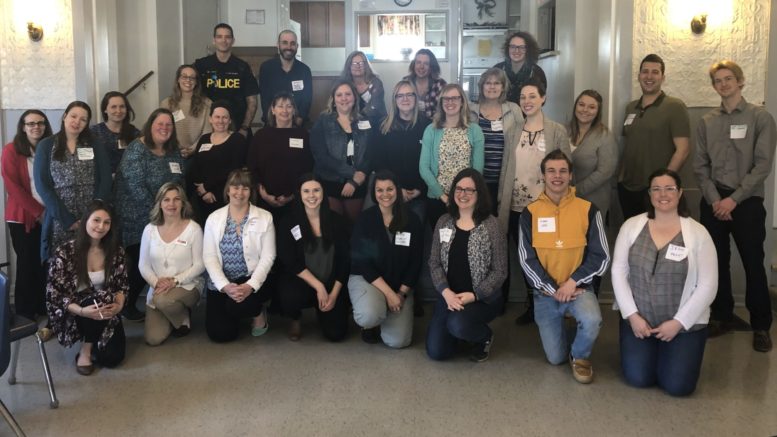 Those young people questioning their sexual identity in Prince Edward County will soon have a resource to contact and a safe space to hang out.

Over 30 people representing more than 20 local agencies that serve youth met at the Bloomfield Town Hall Wed. April 17 to learn more about the issues facing LGBTQ+ youth and discuss what the community can do to better support them.

LGBTQ+ is the acronym to describe a range of sexual and gender identities including people who identify as lesbian, gay, transgender, those questioning their identities, plus all those who don’t feel like their identity can be narrowly defined.

While the LGBTQ+ youth action group continues to meet and make plans to create a drop-in space in the months ahead, the workshop in Bloomfield was the first step in bringing service providers together to help support youth in the community.

“Our goal today was to create a safe and respectful place, for people who work with youth to ask questions and to learn about the issues – with the intention of challenging the homophobic and transphobic attitudes and assumptions that hurt our youth” said  Greater Than: County Youth Collective facilitator Sharif Mahdy.

What is it like to be a teenager questioning your sexual identity in Prince Edward County? What happens if you want to hold hands with your girlfriend on Main Street Picton when you are also female? Where do you go to ask questions when you are second guessing  your own gender and also studying for grade 10 math in a small community?

Until recently, it was only those LGBTQ+ youth in Prince Edward County who had to think about these scenarios and the answers to these questions.

A recent report by Prince Edward Learning Centre (PELC) documented some of the hardships facing LGBTQ+ youth in Prince Edward County; youth who experience bullying, who feel isolated and without the supports they need to come out and be empowered to be themselves.

“At PELC we believe we are all lifelong learners” said Executive Director, Kathy Kennedy. “We were thrilled to see so many service providers make a commitment to hear from youth in our community and join us at the workshop”.