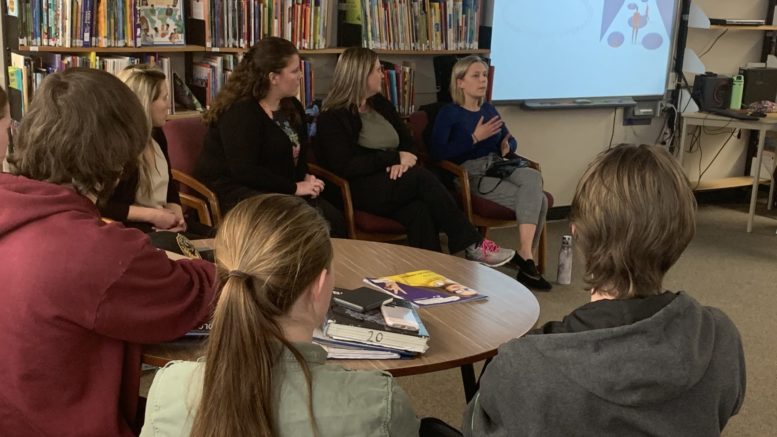 A GOOD DOSE- A panel of medical professionals spoke to PECI Grade 11 and 12 students about pathways to careers in medicine last Tuesday at the school’s library. (Adam Bramburger/Gazette Staff)

Amid the Grade 11 and Grade 12 science classes at PECI, there could be future doctors, nurses, and therapists. Perhaps, they’ll look back at last Tuesday as a valuable step toward their medical careers.

A panel of five medical professionals visited the school’s library to share their experiences navigating post-secondary education to get to their careers — and it turns out there’s no one path there.

“It’s OK to not know what to do and change your mind in the process. I don’t know how many times I did,” said Ashton Scott, an occupational therapist and alumnus of the school.

“I had people in my med school class who did degrees in operation singing and a variety of things not related to medicine. In undergrad, it’s important to enjoy what you’re doing. It’s going to be four years of hell if you think you have to go through a degree to get into something, but don’t enjoy it. It’s important that you’re well rounded.”

The panel shared helpful advice and possible pitfalls for students considering careers in medical fields. They also took questions in person, or anonymously through a surveying program.

The idea for the workshop came from Lyndsey Gott, a resident at Queen’s doing a placement  the Prince Edward Family Health Team in pediatrics and psychiatry. Growing up in Toronto and attending Hamilton’s McMaster University, she didn’t immediately know she wanted to be a doctor like some of her peers. She went to university, struggled and failed a course in first year, studied abroad, did some research, and finally found her calling job shadowing a physician before entering med school at 26.

“I was putting information in patients’ charts and getting lost in patients’ stories. It was that human aspect,” she said. “Having done research, I enjoyed it, but I knew I didn’t want to do a PhD. It was that human element I was missing. I started studying and wrote the (Medical College Admission Test)… you are in a really big rush to get to the reset of your life, but once you get on the path to med school it’s kind of like a bullet train to the rest of your future.”

Scott said she learned she wanted to pursue her career while working as a PSW. She had a patient who said an occupational therapist saved his life. The former pilot had multiple sclerosis and his therapist allowed him to function at home much longer than he could have without support.

“It’s trial and error, seeing what’s out there that will lead you down different paths,” Scott said.

Gott said when she was younger, she wished she had the opportunity to talk to more people in careers that interested her. While on a placement in Perth, she was able to take part in a panel for students considering medicine and she wanted to offer the same benefit to local students.

“I wanted to do something for the community before I left,” she said. “It’s a forum to bring people together and make things happen. I went on the web site and cold called (guidance councillor) Matt (Ronan). He was very receptive and keen.”

The students asked about communication and personal skills in medicine. Another resident, Sabrina Dzafovic, told them she sits on a selection committee that reviews med school applications. There’s a review of a resume — which should have volunteer work — but there’s also an interview to see how people interact wth people and how they emphasize.

“There’s a big focus on that,” she said, noting years ago medical students were looking solely for scientific qualifications.  She said it’s something that can be improved however.

Others questioned whether choice of school matters.

Mayrand said for undergrad, in particular, all the schools in Canada are accredited by the same body, so one degree has the same weight as another. She indicated some schools might have specialties or co-op and placement programs that others don’t have.

Scott said size is a factor for some students as certain universities have upwards of 300 people in some classes. That was an adjustment coming from Prince Edward County. She felt going to a big city can be valuable, though, as there are sometimes placement options not available elsewhere.

Gott told the students they should consider places where they are supported, too.

Asked about taking the MCAT, the doctors said it can be a difficult process. Dzafovic said she felt intimidated while taking a science degree and waited until after she served in the Navy to go back and do it.

She admitted confidence can be a factor.

“Don’t be intimidated or underestimate yourself. Just investigate it some more, take a chance and maybe do a course. At worst, you spend money and don’t take it. Don’t write yourself out of opportunities,” said Dzafovic.

According to Gott, several students write the test several times to learn and it may take those trials to succeed. She noted a number of students also take courses to prepare — and it can be expensive. The exam costs $350 and courses can run up to $2,000, though some schools like Queen’s are encouraging students to teach courses that will reduce the financial barriers.

Students were advised to research opportunities that interest them early in their post-secondary careers and to show they can volunteer over a long term, doing something they’re passionate about.

“This was just incredibly impactful. I’m with Grade 11s and even in Grade 11 students are starting to get incredibly stressed out and anxious about these decisions that are very important life decisions,” she said. “They all feel these decisions are set in stone and that’s not the way it is out in the working world any more.”

Aside from the debt incurred when changing a major, Groleau said she liked having her students learn from successful professionals that there’s nothing wrong with not knowing now what’s in store.

“It’s good for them just to hear there’s different pathways to get to the same place, that you’re going to make mistakes and you can overcome them and still get to your destination. You can get very valuable experience by making those mistakes.”

Groleau also added it was nice to have a panel filled with female physicians, showing students there are opportunities in non-traditional gender roles. Gott actually noted her class now has the most women in the history of Queen’s medicine at 64 per cent of the class.

Overall, Gott agreed the event went well and she was pleased by the students’ participation.