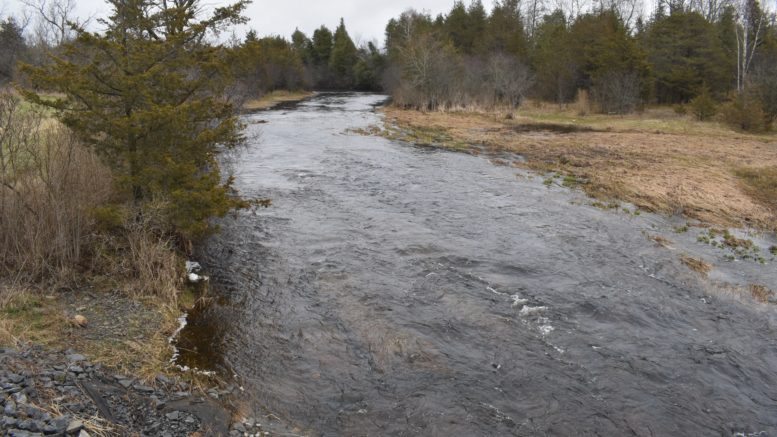 While the Quinte area received much less rain than anticipated this weekend, the local conservation authority has upgraded its earlier flood statement to a flood warning due to high levels of rainfall and large amounts of snowpack north of Highway 7.

According to a news release issued by Quinte Conservation on Monday, the watershed received less than the anticipated rainfall of 65 mm over Easter weekend and  just over 15 mm of rainfall was recorded in the southern portions of the watershed.

But a high of 30 mm was recorded at the rain gauge on Hwy 7 near Deloro along with 40 mm being recorded in the northern regions, including  Depot Lakes near Verona.

The Town of Bancroft, just north of the Quinte Watershed received almost 60 mm of rainfall but that rainfall  will not impact flows in the Quinte watershed as the York River drains to the Ottawa River.

However, it is still expected rivers in the northern region of the Moira and the Salmon watersheds will approach 2014 flood levels.

Quinte Conservation added Lake Ontario could rise approximately 20 cm over the next two weeks and high winds during periods of elevated lake levels could cause shoreline erosion.

The Moira River, downstream of Stoco Lake, and the Napanee River, will not surpass 2014 flood levels however the rain anticipated for April 23rd will extend water level peak times on these rivers.

A flood warning statement notifies flooding is imminent or already occurring in specific watercourses or municipalities.

Municipalities and individuals should take action to deal with flood conditions and this may include road closures and evacuations.

Localized road washouts have been reported throughout the Quinte Watershed and residents are recommended to check in with their municipalities while obeying all road closures and signs.

Staff will continue to monitor conditions and will provide an update if forecasts and conditions change. For current water levels or to report any observations of flooding, residents are encouraged to visit www.QuinteConservation.ca

This message will be in effect until (or updated if anything significant changes before) Monday, April 29, 2019.