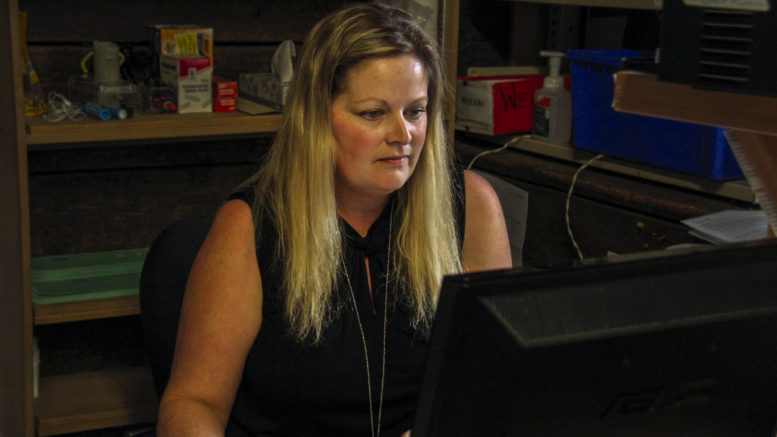 LEFT OFF THE LIST- Interlibrary loan system librarian for the County of Prince Edward Jenn Kingma examines a list of outstanding requests the Southern Ontario Library Service website. The program will cease to exists as of Thurs., April 25, 2019. (Desirée Decoste/For the Gazette)

Through the Interlibrary loan system of the Southern Ontario Library Service (SOLS), patrons of the Prince Edward County Public Library have access to books from over 150 libraries throughout Ontario as well as access to libraries in Saskatchewan, Quebec and 20 Canadian universities.

At least they did have access to them before cuts by the Ministry of Tourism, Culture and Sport carved the organizations operating budgets in half.

Starting April 26, SOLS and the Ontario Library Service – North (OLS-North) will be forced to cease the Interlibrary loan program and delivery service until at least May 31, 2019.

Librarian Jenn Kingma has managed the library’s  Interlibrary loan program for the past four years and told the Gazette the program is a hit with a number of local readers.,

“Over the years we’ve gotten busier, so instead of having one courier drop, we’ve had four because we generate a lot of orders here,” Kingma explained.

“When I say books I mean books, DvDs, microfilm, and the list goes on,” Kingma added.

The timing of the announcement was problematic to say the least for both library staff and patrons according to Library CEO Barb Sweet.

“Last Thursday we had received the courier for that day and our staff called everybody, letting them know the books were in,” Sweet explained. “(Kingma) then went upstairs and took those books off the shelf and we had to start calling people back and say ’Don’t come for your book because we have to send it back’…that’s how abrupt this has all been.”

SOLS provided a courier service that moved materials between public libraries and offered critical training at low or no cost to library staff and volunteers.

In addition to the material loan system, Sweet explained the SOLS provided vital training to staff, volunteers and Library Board trustees.

“The other big part of the SOLS organization is the courses and training, both for trustees and for staff in libraries all across the province,” Sweet stated, “Staff use their webinars and our new Library Board trustees have been using them as well.”

SOLS also gave Ontario libraries a way to join together when securing expensive online resources through group purchasing provided resources to indigenous libraries that helped address shortfalls in funding in those communities.

In with the sudden budget cuts, local branches will incur shipping costs if patrons are tardy in returning materials after the final courier run on Thursday.

“As of Thursday morning that is the last SOLS courier that will be going out,” said Kingma. “We must to have all our borrowed Ontario library books back on that courier. After that, the Prince Edward County Public Library is responsible for shipping them to their home libraries.”

“Everyone is in the same state of flux, trying to get everything back,” stated Kingma. “We literally got the official email at 4:45 Thursday afternoon. On Saturday, we contacted all 506 patrons to try and get their  materials  books back before the deadline.”

In Ontario’s north, the OLS-North administers many of the same services plus comprehensive technology supports for libraries in isolated communities that cannot afford them otherwise.

Libraries in that affected region tend to have much smaller budgets and the services provided by OLS-North are even more critical to daily operations.

“I’m really concerned that our ability to serve the public so well has been eroded and I think there is a bigger issue here than even the immediate loss of Interlibrary,” Sweet told the Gazette. “I think that people come to libraries because they see it as a source of a lot of information and access to information and to me, access to information has been impacted, so it’s very concerning. I can’t even quite imagine how this is going to play out in our organization because were so reliant on the Interlibrary system.”

Before the budget cuts, all Ontario libraries had access to Virtual Document eXchange (VDX),  an online document borrowing and lending request platform between libraries, run by library staff.

All accounts will be under suspension until at least May 31 of next year or perhaps longer if the province refuses to reinstitute the SOLS and OLS-North budgets at 2018 levels.

The library is encouraging people to write or call and voice your complain and how this budget cut effects you.

If you want to find more information on the budget cuts visit https://www.sols.org.