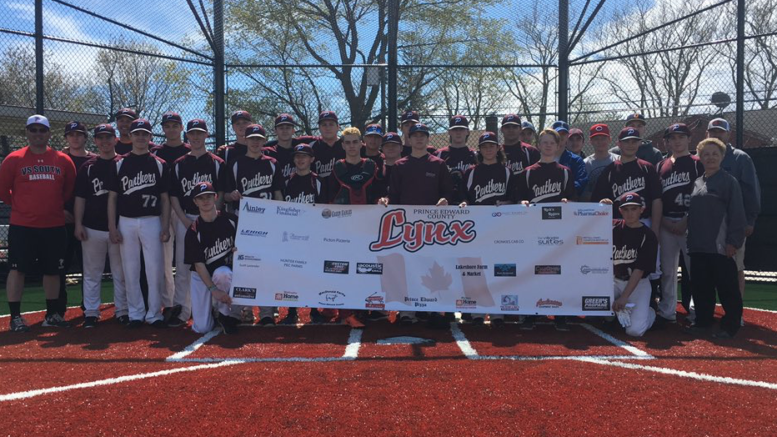 PLAY BALL- The PECI Panthers baseball club travelled to New York City on the weekend to take part in an exhibition doubleheader and take in some sights. (Submitted Photo)

The PECI Panthers baseball club took a big bite out of the Big Apple this weekend and the taste was to their liking.

The local secondary school took part in what’s becoming a spring tradition and visited a diamond in Valley Stream, NY, a community near Queens in the vicinity of the John F. Kennedy airport with the plan to play a couple of exhibition games against a pair of local high school teams.

Rain unfortunately got in the way of the exhibition double headers however the Panthers were able to take the field for the first time this spring on Sunday morning for a spirited inter-squad game.

Panthers skipper Matt Ronan said he values every second of diamond time the club can absorb leading up to the opening day of the Bay of Quinte schedule but the trip is more about the cultural experience of visiting the ‘the city that never sleeps’ than practicing to hit a cut off man or working out who covers what base on a bunt up the line.

“As a coach, this trip give us an opportunity to get on the filed but beyond that it’s a major cultural experience,” Ronan told the Gazette.

The coach had hoped his players would get a chance to see some of the top baseball talent the Valley Stream community had to offer but the weather got in the way.

“These players are one sport athletes and all the focus on is baseball. Meanwhile, we have multi-sport athletes that do a little bit of everything and do it well but it’s a good experience for our players to see the contrast.”

The Easter Sunday inter-squad game was cut short despite the player’s pleas to keep going.

The next morning, despite rainy skies, Valley Stream coaches and municipal representatives including Mayor Edwin Fare came to great the team and the ball field.

The players and their parents were able to take a tour of the Beaver Bat Company, a firm that produces swinging lumber for the likes of Robinson Cano and other Major League Baseball stars.

Ronan said for the visiting team from Canada, the company offers a special deal.

“For $45, they make the players custom bats that typically cost over $100. They are engraved and painted and the next day, the owner delivers them to our hotel,” Ronan said. “That’s all part of the experience.It’s the little touches that open the the guys eyes to the world of travel and being able to meet new people and explore new places.

On Sunday after Ronan pulled the plug on the inter-squad game, the team went into New York City, touring Central Park, Fifth Avenue, Times Square and then going further into China town and Little Italy for some  “shopping and haggling,” Ronan said with a laugh.

“This is the first trip where virtually every player I had was born after 9/11 so everyone has grown up in a changed world. To have them see the reflecting ponds and the monuments it’s a very powerful experience,” said Ronan.

While the first pitch of the 2019 Bay of Quinte baseball season won’t be delivered until next week and handicapping the field would be premature, Ronan said the team has high hopes for the upcoming season

“It’s a pretty deep team. We’ve lost some standouts but we have some strong seniors moving up and there’s real opportunity for the juniors to come in and take advantage of some openings. The players know it’s a merit based, not a seniority based system.”

Ben Wells, Will Ronan and Brodie Byford will be expected to lead this season and Ronan figures pitching will be a strong suit for the club.

“Their skills are there, they’re just a little raw so the goal is to improve the baseball acumen,” the coach added.

Despite other sports having a longer legacy at PECI, the baseball program has been a bursting success for the school with multiple appearances at the Central Ontario and All-Ontario championships in the past decade.

Ronan expects this club to challenge to compete at the 2019 Ontario Federation of School Athletic Associations (OFSAA) as well.

He added that a huge thanks was owed to the community members, businesses and leaders that support the Panthers and their athletic endeavours.

“This trip is possible because of our community,” Ronan said. “We visit a rather metropolitan area and the people there are amazed that we are able to make this trip year after year and the reason we can is out county choses to invest in its youth and it’s really on the local businesses and farmers and individuals that support us and makes this entire experience so special.”