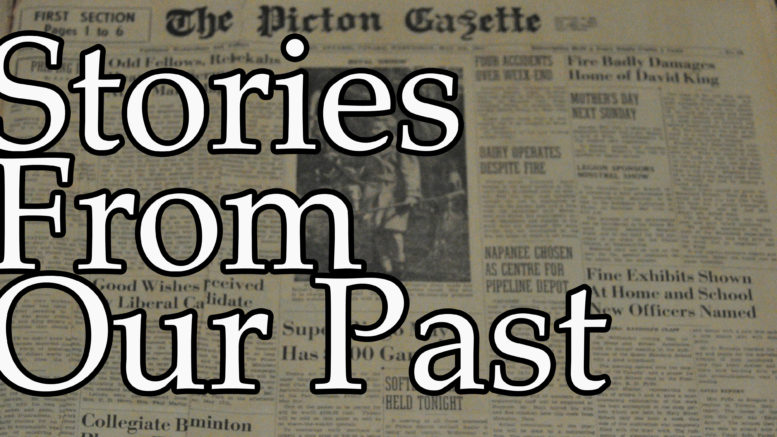 -The town of Picton welcomed its first hospital on the bay shore over looking the harbour. Many different social societies throughout the county helped furnish the various wards and rooms with every detail being in the best of taste.

-Mr. Robert Davidson, chairman of the board of directors of the new hospital paid special tribute to the women working at the hospital. Recently released from war work, the workers seemed more enthusiastic and excited for work at the hospital.

-The True Blue Orphanage received 49 dozen eggs this Easter as a donation from Mary and York St. schools. The children also received candy and cakes.

-Mayor Bone issued a proclamation inaugurating Daylight savings time from midnight of April 29 untill midnight Sept. 24 in order to fall in line with other municipalities in the district and to comply with regulations of the Railway Association of Canada.

-A fire, believed to have been caused by sparks from a chimney, destroyed part of the roof on Clifford Cleave’s garage, near Wellington. A large gang of men were soon on hand and got the blaze under control but the building was lost.

-The Dominion Entomological Laboratory, tried and tested three types of parasitical helpers that will be used in Prince Edward County.

-Mrs. Gyde, flower committee chairman for the Picton United Church reports a total of 21 Easter lilies had been placed in the church as memorials on Easter Sunday.

-The Department Information and Tourism’s School of Architecture has requested an inventory of old buildings in the area to be crafted. In co-operation with the Lennox and Addington County Historical Society, teams of workers are surveying the area.

-As recently as the last decade of the 19th century, it was estimated that less then 10 per cent of people calling themselves physicians had graduated from medical schools. And only 20 per cent of those had even attended medical school lectures.

-Linda Martin, founder of the Picton Women Against Rising Prices (WARP) chapter says only massive food boycotts will effectively fight back against the soaring price of groceries. Martin has watched her weekly shopping bill go up $10 over the past winter

-With “Education Week” about to begin, many schools in Prince Edward County had been preparing special events for their students. Sophiasburgh Central Public school had a busy week planned with students demonstrating their skate boarding skills as well as a junior public speaking contest.