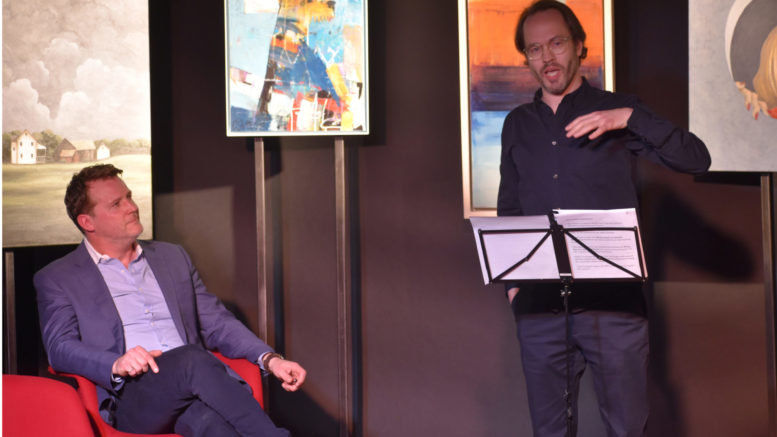 It looks to be another great summer of theatre in Prince Edward County as Festival Players announced a star studded 2019 lineup Sunday afternoon.

Festival Director Graham Abbey and Music Director Johannes Debus were on hand at Wellington’s Studio Theatre to draw back the curtain on what theatre goers can expect this summer.

Abbey said when it came to release the 2019 lineup, the word that kept coming to mind was  community and it was fitting the details on the 2019 season were announced in front of a good number of supporters and sponsors at the theatre on Wellington’s Main Street on Sunday.

Abbey explained this community of live theatre supporters and fans share in with like-minded organizers and professionals that are passionate about bringing and sustaining world class art in Prince Edward County.

“This is an exciting year for us,” said Abbey. “Our audiences are growing and we are attracting some of this country’s finest artists to the shores of Prince Edward County.”

In addition to presenting four critically acclaimed productions in the Studio Theatre space and continuing with the arts education initiatives, Festival Players will welcome Prince Edward County’s newest music and arts festival, Wellington Water Week, to the lineup in Mid-August.

After a more limited engagement in 2018,  Wellington Water Week is back with an expanded lineup of events, performances and communal music experiences.

“We have grown to love Prince Edward County, and were so touched by the incredibly enthusiastic response to our inaugural event in 2018 that we can’t wait to do it again this year,” said Debus, Music Director for Wellington Water Week. “With our shared passion for performing arts, the region and local community, this deeper collaboration with Festival Players provides us with a unique opportunity to explore creative synergies. We are looking forward a magnificent season.”

The 2019 season kicks off on July 9th with Tony-award nominated Broadway hit, Outside Mullingar, written by the Oscar, Pulitzer and Tony Award-winning author of Moonstruck and Doubt, John Patrick Shanley.

Set on neighbouring farms in the Irish midlands, Outside Mullingar is a lyrical misfit-romance, full of gallows humour, wit and wonder.

Baram and Snieckous will read the pages for the first time live in front of the audience then improvise the rest.

From the foundation provided by the playwrights, Baram and Snieckus build an entire play before the audience’s eyes.

The Script Tease Project is sure to be an electric, unpredictable and unforgettable night in the theatre.

Winner of multiple awards including an ACTRA and two Dora Awards, Crawford has been a fixture on Canadian screens and is best known for his role in This Hour has 22 Minutes.

He currently hosts CBC’s Because News and has guest-starred in some of Canada’s most popular shows including The Baroness Von Sketch Show, Corner Gas, and Murdoch Mysteries. Every Brilliant Thing is a one-of-a-kind, interactive theatrical event that engages its audience in thrilling and original ways.

At once profoundly funny and deeply moving, the production chronicles a young person’s quest to unearth every magnificent thing about being alive.

From Aug. 17thto 25th, the village of Wellington will be transformed into a canvas celebrating the waters that surround Prince Edward County as the second annual Wellington Water Week kicks off to the harmonious voices of festival-favourite Opus 8.

This year, the festival welcomes the multiple Juno Award-nominee Sarah Slean who will join Debus in leading SING!, a mass community choir event that will unite the public in song right on the shore of Lake Ontario with Slean later performing in concert at the Wellington United Church.

Returning this year is the popular Dinner and Concert Series with three highly anticipated events: The first dinner of the series features instrumentalist Stephen Hargreaves in a live harpsichord performance set to the screening of the classic silent German movie, The Cabinet of Dr. Caligari, at Drake Devonshire.

The second and third will be headlined by Montreal’s Dominic Desautels and The Percival Project and Ottawa’s  The Cheng² Duo with both performances being paired with delightful menus served under the tent overlooking the lake by Prince Edward County’s iconic Picnic during intermission.

And the food pairings don’t stop there as a Musical + Edible Promenade through Wellington will take guests on a guided walking tour through town with each stop featuring the gorgeous edible art of plant-based local chef Chris Byrne whose fare will inspired by and set to the stunning performances of percussionist Ryan Scott, harpist Sanya Eng and violinist Elissa Lee along the way.

Other exciting and unique musical experiences include the return of festival favourite Danika Lorèn with Collectìf and an intimate concert with Pheobe Carrai and Elinor Frey featuring a program of duo sonatas from the 18th century.

The summer will still be going strong on Aug. 28th when Person of Interest comes to town along with its hilarious creator, Melody Johnson, who also stars in the production as the ‘housebound loser.’

Winner of a Canadian Comedy Award and recipient of several Dora Award and other nominations for numerous roles through various renowned Canadian theatre companies such as the Tarragon Theatre, Canadian Stage, The National Arts Centre and the Royal Manitoba Theatre Centre, Johnson is also a lauded performer of Toronto Second City’s main stage and has directed both the National Touring Company and MainStage companies to critical acclaim.

In what is the mostly true and very funny story of an actor driven to the brink, Person of Interest is directed by Rick Roberts and is storytelling at its best and should strike a chord with anyone who has ever lived, loved and battled with neighbours.

Abbey added Festival Players welcomes veteran producer Paul Flicker to the team as Managing Director and Producer, and that organization is most grateful to our generous donors and sponsors including the 2019 Season Presenting Sponsor Huff Estates and 2019 Festival Players Company Sponsor BMO Financial Group.

The season is supported in part by the Ontario Arts Council, Canadian Heritage and Service Canada and, with such great support evidenced in 2018, the OAC upped its grant total for the upcoming season.

Tickets for all events are on sale now and range from $25-$40 plus HST with senior and youth pricing as well as subscription packages available.

Visit www.festivalplayers.ca for more details and to purchase tickets.