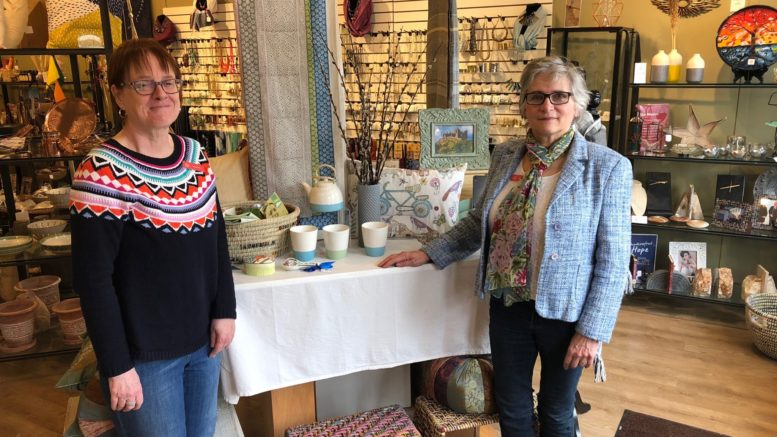 A DECADE OF TEN THOUSAND VILLAGES- Volunteer Tanis Crowe and manager Catherine Reilly at the Picton Ten Thousand Villages earlier this week. The store is celebrating a decade of operations May 11. (Jason Parks/Gazette Staff)

The Picton branch of Ten Thousand Villages (TTV) will be celebrating their tenth anniversary in style next Saturday,  May 11 with a number of festivities.

Ten Thousand Villages is a not-for-profit retailer of fairly traded goods from developing nations and are a project of the Mennonite Central Committee.

Starting at 2 p.m.-4 p.m. there will be an outside drum circle on Main St. in front of the store and the anniversary will finish at St. Andrews from 5:30 p.m.-7 p.m. with more drumming, an array of international street food and acknowledgment of all the volunteers.

“We’ve been given permission to block off two parking spaces for a drum circle under the leadership of drummer Jack Pyl,” Rev. Lynne Donovan, one of the Founding Directors said. “Come and enjoy a piece of Egyptian Kissing Cake, it’s made from fair trade ingredients.”

When it opened, Picton store was the  50th TTV to open in Canada but sadly it’s now one of only 25 stores that remain.

In the past decade, the Picton store has sold more than $1.6 million in merchandise and that’s great news for artisans in developing countries across the globe.

The TTV organization partners with artisan groups in close to 60 countries and these artisans are given a fair wage up front enabling them to provide education and health care for their children.

The products created are often made with recycled materials and care for the environment.

Over the years, the TTV organization  has provided a living wage for thousands of artists.

“Through the sales in the store we’ve lifted many folks up out of poverty in developing countries,” Catherine Reilly, Executive Director told the Gazette. “As well we offer a really fun volunteer opportunity, especially if people are new to the County it’s a way of getting out and meeting people.”

As part of the celebrations the Picton store is having a sale with around 60-70 percent of selected merchandise being cleared out as well as some deeply discounted clearance items being brought in special for the celebration event.

The store has an eclectic  variety of items available to purchase such as handbags, jewelry, women’s clothing and much more and shoppers can go online and purchase merchandise at https://www.tenthousandvillages.ca/

“Our merchandise is hand crafted. Artists use a lot of recycled material and do a lot of oversight to make sure that it’s done in an appropriate way,” Reilly stated. “For example: When making all of our leather goods artist don’t use heavy metals in the curing of the leather. They use salt curing because that’s one of the big issues in some of these places, the whole community becomes poisoned with the effluent from the production of their products.”

The key to the store’s business model is dependant the volunteers. With the margins in fair trade retail only about 40 percent compared to commercial retail which is at 200 percent, TTV relies on a large  and highly dedicated volunteer staff and one part-time manager.

“I really enjoy working at the store, it’s a fun work environment,” Tanis Crowe, one of the founding volunteers added.

Buying from the store is a great way to support people on the far side of the world in developing countries  that sometimes don’t get thought about.

The volunteers of TTV Picton branch hope the community will join the party and  enjoy the festivities.