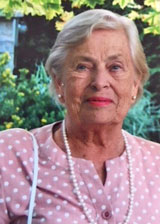 Barbara Jean Charest (nee Scobey) 1928-2019
Passed away peacefully at the Picton hospital surrounded by family, on 19 April 2019 at age 90. Beloved wife of the late Lt Col Leslie Charest for 69 years. Cherished mother of Janice MacDonald (Michael) and the late Brenda Charest. Loving Nana of Ian MacDonald (Annick) and Colin MacDonald (Ashley) and proud Grammy of Luke, Limu, Shema and Clara. Daughter of the late Victor and Jean Scobey (nee Wharton) of Liverpool N.S. and survived by her brother Newman (Pam). The family moved extensively on military postings, in Canada, USA, Germany, and Cyprus where Barbara and Les made many dear friends over the years. In 1996 they moved from Ottawa to Wellington on the Lake where they enjoyed a very happy retirement until Les became ill and passed away last year. The family wishes to thank the staff at Wellings of Picton and the medical staff at the Picton Hospital for their caring kindness to Barbara. Cremation has taken place and internment at the Beechwood Military Cemetery in Ottawa for both Barbara and Les will take place later this summer. Memorial donations to the PECM Hospital Foundation would be appreciated. Arrangements entrusted to the Ainsworth Funeral Home, 288 Noxon Avenue, Wellington. Online donations and condolences at www.ainsworthfuneralhome.com