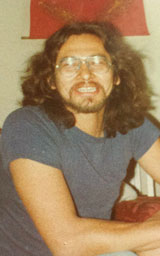 Roy Brian Jocko was known to everyone as Bun. He entered this world through Mattawa, Ontario as part of the Algonquin of Pikwakanagan Bear Clan on September 23rd, 1953 and humbly left again on April 17, 2019 from Belleville, Ontario at the age of 65. The folks that encountered Bun were always greeted with a smile and a story and often left with a life lesson, a softened heart, a round of chuckles and sometimes a belly full of beer. He loved his daughter, dogs, books, hockey, broomball and life. Bun lived his life with so much positivity and freedom, he was never known to speak negatively about most anything. He will be greatly missed by his daughter Stacie Carroll and his best friend Butch Stringer and his side man Dave Doubleday who were dedicated to his comfort and happiness until the end. Though he encountered a paralyzing spinal cord injury in 2017, he never spoke of hardship, only the gifts life brings (which this year won’t be the Leaf’s Cup – ‘’next year’’ he’d say). His positivity in life would be the biggest lesson folks could take home. ‘’It could be worse’’ he would say. Bun was predeceased by his parents, Joan Jocko (Nelson), and Roy Jocko, but has left behind his Brother Gary Jocko of Calgary, Karen Evans (Jocko) of Calgary and Carol Marisett (Jocko) of Picton. He will be missed by his nieces and nephews, Tara, Vanessa, Jade, Roxanne, Shane, Jasmine and Adam as well as Great-nieces, Christina, Nicole and Ashley. We will be celebrating his life at the Elks Lodge (21 Elk St.) in Picton, Ontario on May 4th, 2019 from 1-4pm. Bring a dish if you fancy, live music provided. It will be casual as he would want everyone to just be merry, smile, laugh and tell great stories about all his adventures and your encounters with him. Life is short, do what you love and do it with passion and positivity.