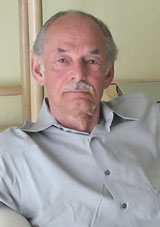 Otto Donald (Don)  Rogers well-known Canadian painter and sculptor, died on April 28, 2019 in Picton, Ontario after a brief illness. Otto was born in rural Saskatchewan to Victor and Mary Rogers on November 19, 1935. Growing up on the family wheat farm, Don became more interested in beauty than agriculture, leading him to pursue a career in fine arts. After initially studying at the Saskatoon Teachers’ College (1952-53), he pursued a bachelor’s degree and master’s degree at the University of Wisconsin (1953-59). It was while completing his graduate studies that he met his partner of 60 years, Barbara Nelson, who became attracted to him when she went to pick up a piece of his art that her sister had purchased. He brought Barbara back to the prairies, accepting a teaching position at the University of Saskatchewan where he taught for 29 years. Always a spiritual seeker, in 1960 he embraced the teachings of the Bahá’í Faith. Throughout his life, the teachings of Bahá’u’lláh infused every aspect of his life. In particular, the idea of unity in diversity became a foundational principle of his art. From 1988-1998, Otto and his wife Barbara lived and worked in Haifa, Israel, where he held the position of Counsellor at the Bahá’í World Centre. During this time, he travelled throughout the world, extensively and tirelessly promoting the teachings of the Bahá’í Faith, which had become his life’s passion. He returned to Canada in 1998, setting up his home and studio in Prince Edward County. His work is held in more than 30 public collections including the Art Gallery of Ontario, the National Gallery of Canada, the Museum of Fine Arts in Boston and the Montreal Museum of Fine Arts, as well as hundreds of private collections. He leaves behind his wife Barbara, son Klee Rogers (Teresa), daughter Sasha Hariri (Siamak) and daughter Julie Rogers-Glabush (Sky). He was predeceased by his daughter Kim Rogers-Belson (Paul). The funeral was held at the Crystal Palace, 375 Picton Main St, Picton, Ontario on Wednesday May 1 at 1:00 p.m. Private interment will follow.