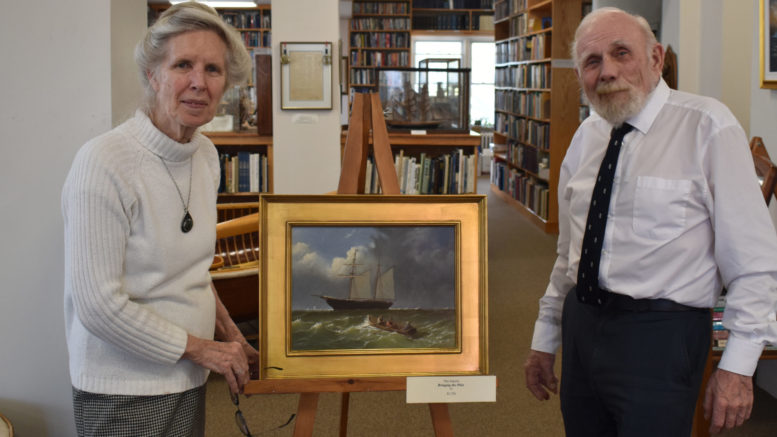 SAILING AWAY- Dr. Paul Adamthwaite and Betty Anne Anderson of the Victory, home of the Canadian Society of Marine Artists and Naval Marine Archives, opened their 36th annual naval art exhibition on Friday. Among the featured works include 'Bringing the Pilot' by Pim Sekeris.(Sarah Williams/Gazette Staff)

Despite it’s modest publicity, the Canadian Society of Marine Artists (CSMA) is celebrating its 36th Annual Exhibition with a collection of artwork that spans the breadth of this vast country from British Columbia to Nova Scotia and many waterways in between.

The Naval Marine Archive (NMA) in the heart of Picton is a mere stone’s throw from celebrated restaurants and watering holes and open seven days a week throughout most of the year. The archive is situated on Main St. in a building as handsome as it is historic and serves as home to the CSMA.

The exhibition runs from May 3rd until the end of July and admission is free.

Paul Adamthwaite, Executive Director of The NMA, spoke to the inherent nature of the sea, like the life of a sailor, as being marked by change and the artwork inspired by such environments reflects this transitory nature, whether through the play with light or through tumultuous scenes.

According to their website, CSMA is dedicated to those Canadian artists who have been and always will be inspired by the oceans and lakes, ships and those who sail in them.

One such artist who was present at the opening of the exhibition is Pim Sekeris. Sekeris is a a native of Holland who studied at the Academie des Beaux Arts in Rotterdam.

There is a remarkable presence that this artist’s work creates as Sekeris plays with light and detail to captivate the viewer and transport them to a particular moment.

Speaking of his influences and inspirations, the artist told the Gazette at Friday’s exhibition opening that his work is guided by the old Dutch school of painting.

As evidenced by Sekeris’ work, the style depicts a masterful use of light and shadow.

“For some reason,” as Sekeris says, “It automatically comes to me. I’ve been painting all my life and also I love anything that has to do with sailing and marine art.”

Sekeris refers to the work displayed in Picton as being part of his“hobby line” with many other his celebrated works currently being shown in galleries in Europe and North America.

As Adamthwaite postulated it would be impossible to separate the naval tradition from artwork.

And as much of the artwork at the NMA can attest to it would be difficult to separate the seas, lakes and rivers from those who are bound to be inspired by them.