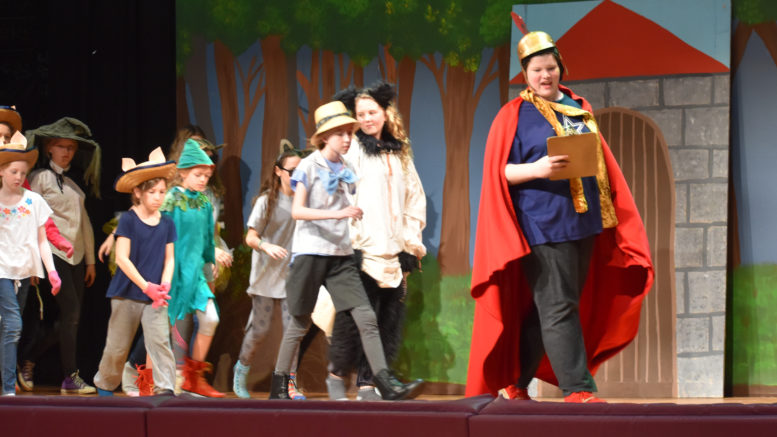 IN A LINE- Cast members in the PECI production of Shrek Jr. walk through their lines and movements at a dress rehearsal on Tuesday afternoon. (Sarah Williams/Gazette Staff)

A number of Prince Edward Collegiate Institute students have been busy rehearsing for their upcoming musical, Shrek Junior, which debuts Thursday May 9th.

Beginning in January, approximately 80-85 students from Grade One to Grade Eight devoted at least an hour of each day to this production. Many of these students have given up recesses and lunches to work on the musical.

Based on the Broadway production and DreamWorks film, Shrek Junior is written by David Lindsay-Abaire with music by Jeanine Tesori.

The musical is set in a mythical “once upon a time” sort of land. Having been mocked and feared for his entire life, Shrek, an ogre, retreats to a swamp to live far away from taunts and jeers. The story takes a turn when Shrek’s new home is overrun with fairytale characters who have been banished by Lord Farquaad, described as “A tiny terror with big ambitions.” In order to reclaim his new home, Shrek is given the task of rescuing Princess Fiona, who he consequently falls in love with.

The story of Shrek Junior lies in the twists and turns that this arguably lovable ogre encounters on his quest to rid the swamp of invaders and win the love of a princess. Of course, the PECI version has been somewhat adapted.

PECI student, Kaitlyn Harris, will be playing Princess Fiona in the upcoming musical. Speaking of the experience, she said it was, “Very fun. But also pretty hard because you have to learn so many lines and songs. But I really like the people that I work with and they are doing a great job putting this together.”

From costumes, to set-design and background vocals, this is “The cast of thousands,” according to one of the directors, Sam Hirst. She explained to the Gazette, “There are a lot of little roles, so it’s perfect for a junior musical. Most of them have lines. There are others who sing quite a lot and then there are a lot more who are working backstage, who are working sound and who make the props. It’s really been a team effort.”

Shrek Junior will be the first musical staged since the amalgamation of the County elementary schools and PECI. With three directors, Ms. Bell, Ms. Hirst and Mdme Monica, as well as Mr. Sheahan working sound and parent volunteers, this is clearly a collective endeavour.

The budding thespians were buzzing at the latest dress rehearsal-their excitement palpable. Some costumes were donned prematurely, others lay abandoned on the floor as students hustled to attention, awaiting direction and practicing their roles.

The directors are hopeful there will be other musicals to grace the stage of PECI, but in the meantime Shrek Junior will be showing May 9th and 10th at 6:30 p.m. Tickets are available at the door or at PECI.