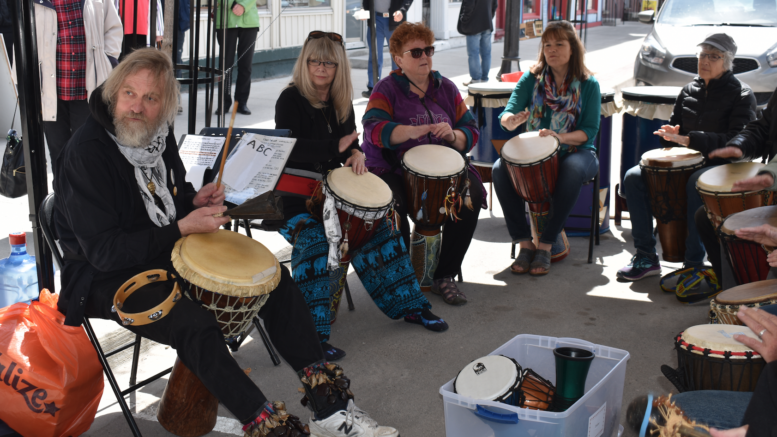 On Saturday, the rhythmic sound of drums could be heard echoing down Main Street in Picton. The music was that of a drum circle, led by Ottawa drummer Jack Pyl, to celebrate the 10th anniversary of Ten Thousand Villages (TTV) here in the county. The sound from the circle grew stronger as several community members, young and old, joined the drumming.

Patrons filed in and out of TTV, arms laden with newly procured goods while the smell of coffee mingled with  Egyptian Kiss Cake, both of which had been made for the celebrations on Saturday.

Store manager Catherine Reilly took time to speak with the Gazette regarding the day’s events. 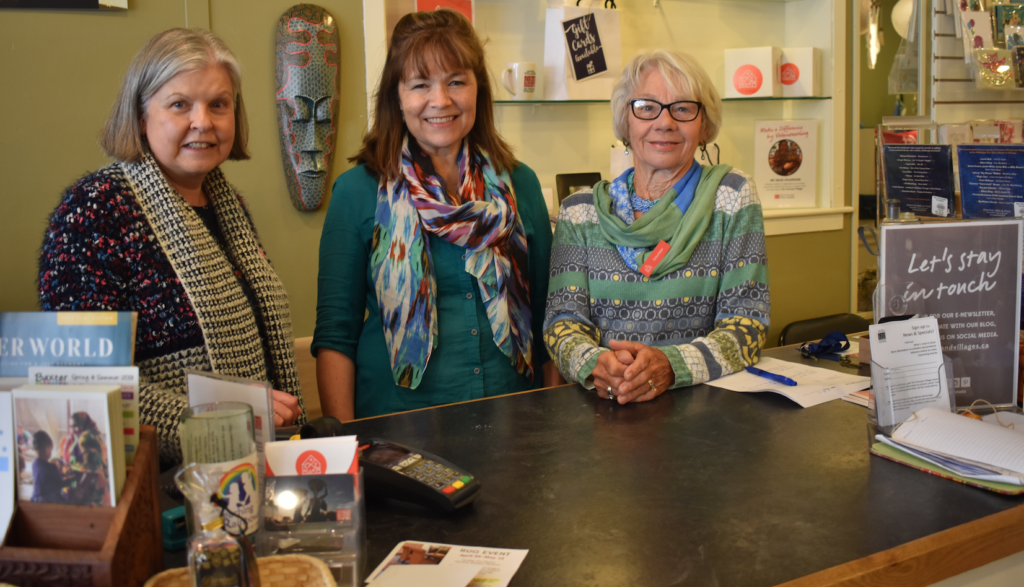 “We’re honouring the founding members and the volunteers we have today,” Reilly explained.

The drum circle is a symbolic gesture as the grand-opening ceremonies for TTV back in 2009 were also augmented by drumming.

“Drumming really is a universal language. It’s a way of calling people together, like a heartbeat,” Reilly added.

With its heavy, gothic red door it’s hard to imagine that TTV had not always graced Main Street.

In an earlier incarnation, the building had been a jewellery store by the name of House of Falconer. When the previous owner passed away, members of St. Andrew’s Presbyterian Church decided to buy the building and turn it into the popular and valued  fair trade shop it is today.

“St. Andrew’s looks to creating a circle of friends, so TTV helps people in developing countries. It’s a way of broadening our circle outside of Prince Edward County,” said Reilly  “It’s putting theology into action-we help the folks in other countries by offering a place to sell their crafts and ensure that they have a fair price for what they do.”

Before she jumped into the drum circle herself, Reverend Lynne Donovan spoke about the event and the huge success of TTV.

“This is a huge milestone for us in this economic climate. This is all about us supporting as many vulnerable people in the developing world as we can. To date, we have sold $1.6 million in merchandise,” Donovan said.

Donovan was also careful to note that it is more than giving people a living wage. It’s giving them a community, respect, dignity, empowerment and helping them recognize that they’re part of this network of people that care about them throughout the year.

Remarkably, TTV only has a mark-up of 40 per cent, as opposed to 200-250 per cent for most fair-trade outlets. That means TTV are able to provide a living wage to artisans while supplying the community with quality fair-trade goods.

“St. Andrew’s is all about creating healthy community on every level that we are capable of,” said Donovan.

On this anniversary celebration, Donovan harkened back to the events that led up to St. Andrew’s purchasing what is now TTV.

“We assembled very quickly. A group from the church formed and donated money to purchase the building for the sole purpose of it becoming a fair trade store,” she explained.

The St. Andrew’s vision was so strong that, at the time the building was purchased, the church group had not even ascertained that a TTV would able to be located there.

These church members act as friendly landlords that leave no trace on the face of TTV.

But, without them, and the many volunteers, the shop would not be possible.

They are, as both Donovan and Reilly pointed out, a cause for celebration on the 10th anniversary of TTV in Picton.