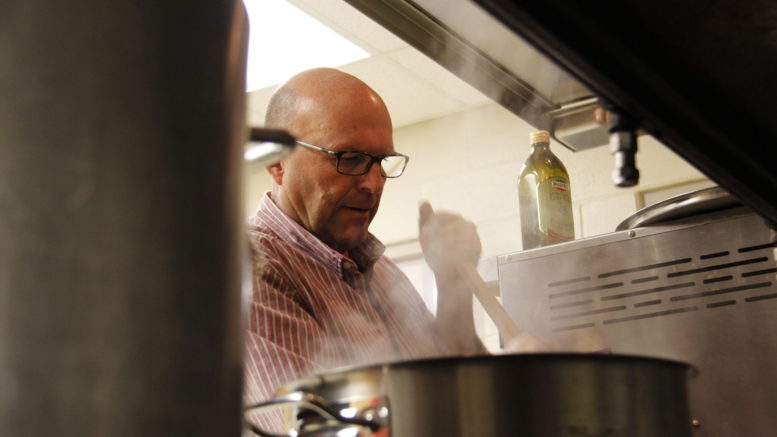 INTO THE POT- Prince Edward County Mayor Steve Ferguson must have longed for the broiler that is the Shire Hall horseshoe while he boiled produce at Highline Hall on Wed. May 8. ((Desirée Decoste/Gazette Staff)

Wednesday evening Mayor Steve Ferguson and five council members rolled up their sleeves, sharpened their knives and joined in a fun evening with Food to Share at Wellington’s Highline Hall.

The kitchen was an organized mess of councillors and volunteers busy chopping and preparing a meal of beef chilli, coleslaw and cornbread from scratch.

Everyone sat down after they were done cooking and tasted their hard work.

“I think it was a really great exercise and I enjoyed it. It seemed fun for those who don’t know how to cook. I don’t know how many of those there are, but I do know how to cook so I’m not shy,” Mayor Steve Ferguson told the Gazette. “When I attended the Food to Share volunteer lunch the suggestion was made at the time to get council to really understand what’s involved in this process so I said, ‘Why don’t we cook a meal?’ It took some time to organize but here we are and I think it illustrates first-hand the meaning of a community and what Food to Share does and it will make easier conversation with the members of council.” 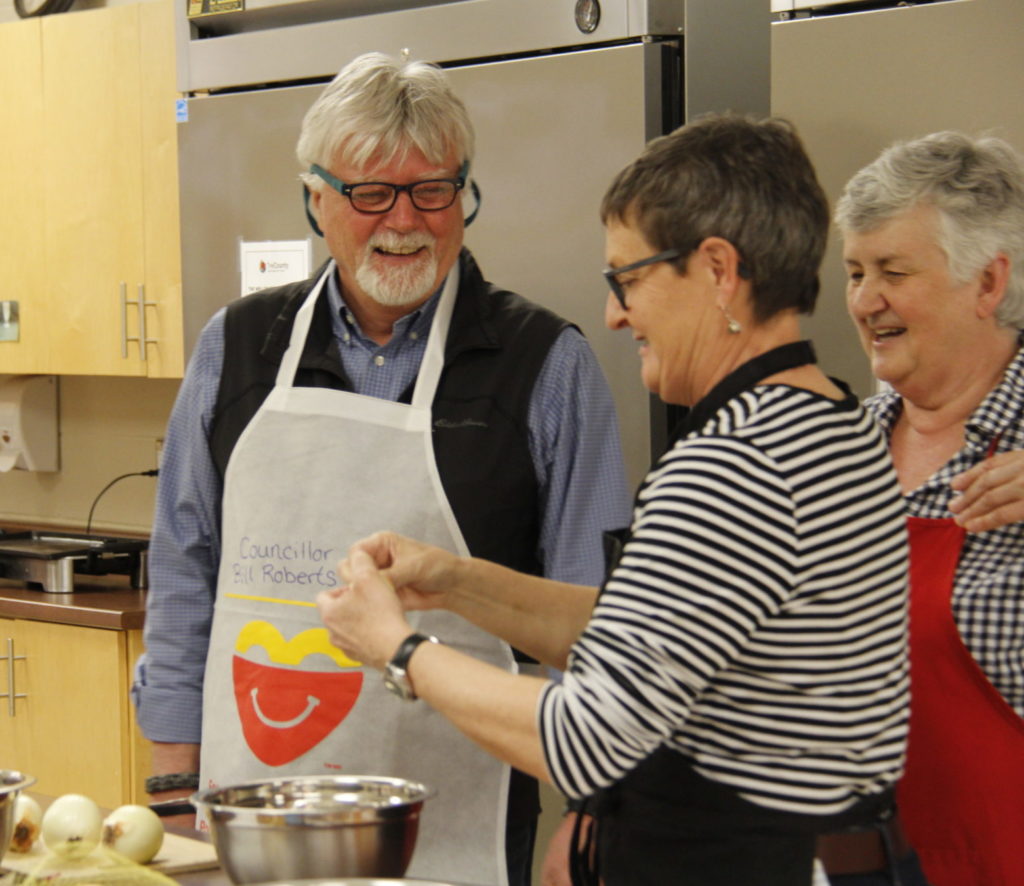 Food to Share was also trying something new-french toast on-the-go.

“We’re trying making french toast to take with you,” Glen Wallis, Co-Founder of Food to Share told the Gazette. “We’re going to try and freeze it so that people can take it home for their kids pop it in the toaster as they’re leaving for school and have a piece of french toast on the way.”

Food to Share began back in 2015 when Wallis got an Awesome PEC grant of $1,000. The organization is a non-profit organization that cooks meals and gives them to the Picton and Wellington food banks to distribute. Some people have a preconceived notion about the organization just providing prepared and frozen meals to local food banks.

That portion is still a large part  of what Food to Share but the organization hosts free adult and child cooking classes and are working towards a market-style set up for fresh produce where people can go grab a bag and pick and choose some produce.

“From the food banks, the can and box stuff, it’s all edible,” Wallis said “You can get your eggs and milk and a bit of protein maybe but really produce is the prohibitively expensive stuff and most people that use the food banks would really appreciate having access to those goods, so that’s really what were trying to push for now.”

Wallis is passionate about the work the group is completing in the Food to Share program and remains impressed at just how much support it has with both volunteers and municipal leaders.

The County of Prince Edward provides support by  providing in-kind access to kitchens. Wallis said there are cities of over 100,000 people in Ontario who get no support in this matter.

“Because we have access to two commercial kitchens in two arenas (Picton and Wellington) we’re hoping to cook 100 meals a week at each arena, so 200 meals a week,” Wallis stated. “If we do 45 weeks in a year, thats 9,000 meals.”

Food to Share is working on a new strategic plan thanks to grants from the Rural Ontario Institute and the  County Foundation and are collaborative partners with Prince Edward Learning Centre,  the Storehouse and Picton United Church County food bank and The County Foundation.

“I think Food to Share is one of the most important volunteer initiatives in Prince Edward County’s history,” said Sophiasburgh councillor Bill Roberts. “There’s nothing more important to us than providing a healthy meal for families in need and that has positive impact

throughout the community in terms of health care, economic development, education outcomes. It’s perhaps the most important thing we do. It was a really fun evening and very worth while with good friends to do it with to.”