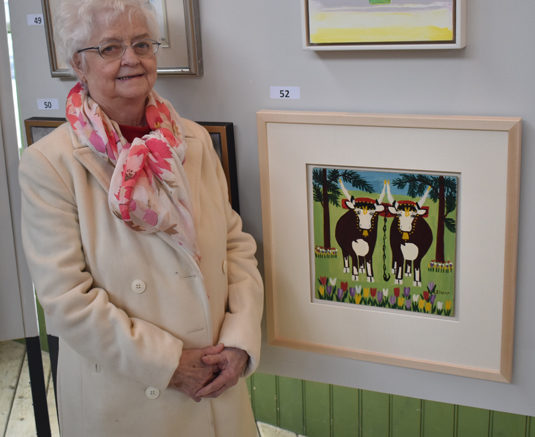 Members of the community gathered at the Crystal Palace Saturday for the anticipated Bid for the Build Art Auction in support of a new Prince Edward County Memorial Hospital with over $100,000 being raised for the redevelopment project.

This year is the centennial of Prince Edward County’s inaugural hospital. Much like today, the original hospital on Hill Street in Picton was made possible through the generous contributions of community members.

In 1908, the Sir Thomas Picton Chapter, Imperial Order Daughters of the Empire agreed to contribute money to the new hospital that would be incorporated on April 17, 1919. PECMH has been in it’s current location since 1959.

If there is strength in numbers, then the new hospital will be built on a solid foundation of supporters. The Bid for the Build showcased a breadth of support from art lovers all over the county.

“This is a new partnership for us with PECADA,” said Monica Alyea, chair of the PECMHF board, “It is one of the biggest events we’ve had so far and it gathers together a different group of people. We have a lot of different audiences to reach in order to raise the necessary funds to get our hospital.”

Alyea described a domino effect, whereby the outreach of PECMHF has a ripple effect in the community.

“Only we will be building up, not knocking over,” she added with a laugh. “We might have people here tonight who maybe haven’t heard about the hospital before. Perhaps they have property here and have come for the art show because they have bought art previously in the County.”

In this way, Bid for the Build is a unique way to gain support from a demographic that might not have previously been aware of the need for a new hospital in Prince Edward County.

PECADA, a group of art galleries and art collectors, showed enormous generosity in donating over 85 works to the auction. Among the many works was one by renowned Nova Scotian folk artist, Maud Lewis. Among the many attendees of the Bid for the Build was Lewis’ great niece Gerry Russell who could be seen smiling proudly in front of her relative’s tell-tale cheery painting.

David Hatch, owner of Hatch Gallery in Bloomfield, took the time to speak with the Gazette about the new role of PECADA in the Prince Edward county cultural landscape.

Hatch explained local members of the Prince Edward County art community saw the need for a group of galleries to organize and promote themselves together.

“If you have one day in Prince Edward County and want to go on a wine tour and go to some galleries, we hope our galleries will be the ones you think of.”

There are currently six galleries that are part of PECADA.

Part of PECADA’s mandate is also to give back to the community. Recently, they were involved with Renew: An Online Art Auction, the goal of which was to raise funds for the Picton Public Library Expansion.

Bid for the Build is the largest fundraiser with which they have yet to be involved.

“Each gallery played a fundamental role in opening the door to art collectors and individuals who the hospital might not necessarily have a relationship with,” said Shannon Coull, Executive Director of PECMHF.

Referring to PECMH as “The heart of the County”, Coull said  the art auction was a wonderful example of how a cause can bring a group of community partners together.

“Health care is at the core of a good quality of life and knowing that they have access to care close to home is really important to the community,” she said.

Currently, the PECMHF board is awaiting approval to move onto the Ministry of Health’s Stage 3 planning for the new hospital.

Coull said the Foundation is hoping to  hear from the province by June 30  about moving into the next stage.”

Alyea is careful to add that, going forward, there will be a number of target points that need to be met as PECMHF progresses through Stage 3 and Stage 4 of the new build.

However, the work does not end there.

This represents the largest fundraising campaign in the history of Prince Edward County.

With already close to $11 million in cash and pledges, the organizers of the Bid for the Build are hopeful they will be able to raise as much as possible to go towards the fundraising goal.

Both David Hatch and Shannon Coull shared the sentiment that the Bid for the Build was a success before the first strike of the gavel. With close to 200 tickets sold before the doors opened, the event was an opportunity to bring the community together to raise awareness of PECMHF and the need for a new hospital.