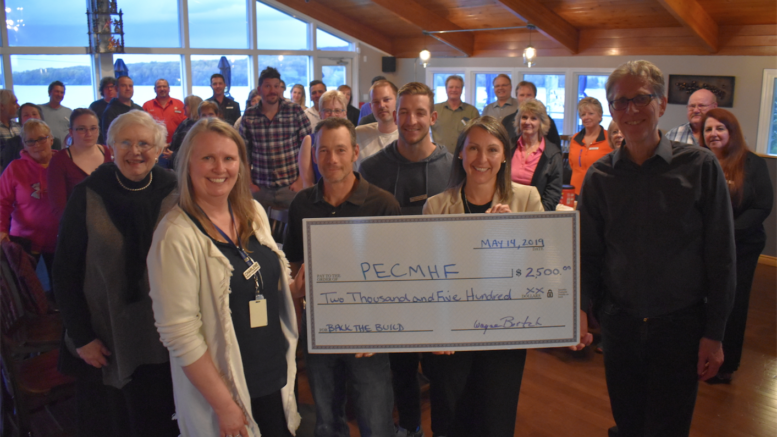 Prince Edward County Construction Association (PECCA) is more than just an association dedicated to promoting high standards of performance, integrity, and quality in the building community.

PECCA is also a group dedicated to acts of charity.

On Tuesday, PECCA gathered at the Picton Golf and County Club to present a cheque for $2,500 to the Prince Edward County Memorial Hospital Foundation (PECMHF).

Formed in the late 1960s, the association now boasts 42 members ranging from interior designers to contractors and real estate agents.

With close to $11 million in cash and pledge donations, the most recent donation from PECCA put PECMHF even closer to achieving their goal of $16.5 million required in order to move forward with the next stage for building the new hospital.

Apart from presenting a donation on behalf of PECCA, the evening was also intended to inform the members and guests of the association.

“PECCA invited members from our team, the Hospital Foundation, as well as the planning projects team from Quinte Health Care to make a presentation to the association regarding our Back the Build Campaign for our new hospital and detail where we are in our campaign,” said Shannon Coull, Executive Director of PECMHF.

Coull said the Foundation is very grateful PECCA has come together to show their support for the project.

“We’ve received an outpouring of support from our community, and for the construction association to be one of those supporters to help us build a new hospital is wonderful,” she added.

Russell Head, vice-president of PECCA said the donation is all about “Giving back to the community.”

In the past, the association has given back to the community in several different ways. For example, Wayne Burtch, secretary/treasurer for PECCA told the Gazette the group raises money through different functions.

“For example, through our annual golf tournament we raise money for several students from Prince Edward Collegiate Institute (PECI) who want to pursue an education in the trades. In total, three students will receive a $750 bursary for their educational expenses,” Burtch said.

In the past, the association has also donated to local food banks, the Elks, the legion, and the New Life Girls Home.

Coull is careful to note that the dream of having a new hospital is just that until they’re approved for Stage 3 of the planning process.

However, Bill Andrews of the planning and projects department of Quinte Health Care spoke of the new provincial government budget  and said the redevelopment has been mentioned by name at different times.

“I think it really is a good indicator that the political arm is behind the project,” Andrews said.

PECCA president Jason Terpstra added having a hospital in Prince Edward County was vital to local builders. Being “It’s really important to have a hospital in the County that employees can easily get to if something goes wrong,” Terpstra said.

Wayne Burtch pointed out that PECCA believes in the need for a new hospital simply based on the large number of senior citizens in Prince Edward County.

Regardless of the motivation, support for a new hospital can be seen from a wide-range of groups in Prince Edward County.