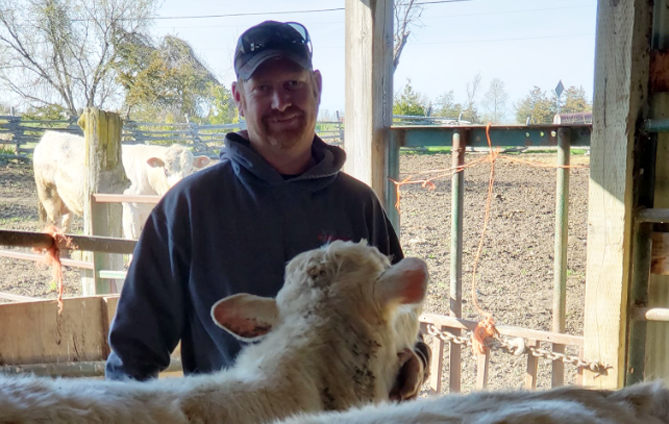 CATTLE CARE- North Marysburgh beef producer Steve Everall told the Gazette his operation has been the subject of a second investigation as a result of a passer by making a complaint to the OSPCA. (Submitted photo)

For the second time in three years, a young farming family has had a complaint filed against them by a passer-by regarding the state of a muddy barnyard.

Steve and Angie Everall along with their children Hayley and Ben operate Cedar E Lane farms on County Road 17 in the ward of North Marysburgh where they have nearly 30 head of top quality Charolais- breed beef cattle as well as four horses.

Under the new directions from the Ontario government, the complaint, which would have previously been dealt with by the Ontario Society for the Prevention of Cruelty to Animals ended up in the hands of the Prince Edward Detachment of the Ontario Provincial Police.

A member of the OPP visited the farm on Thursday in relation to the complaint. 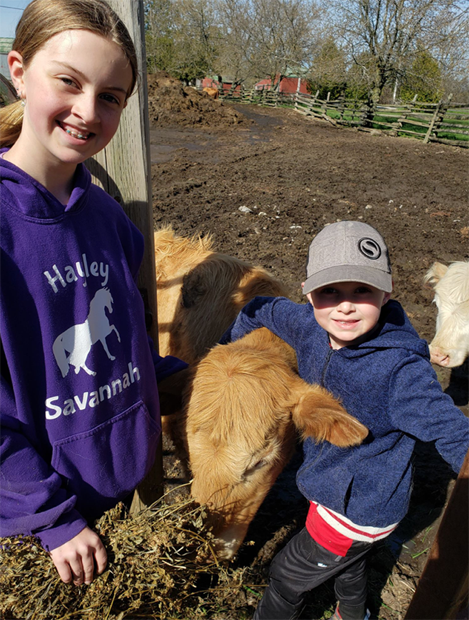 VERY VIOLET Hayley and Ben Everall of Cedar E Farm in North Marysburgh with their 4H calf Violet. A passer by sent a complaint to the OSPCA regarding the condition of the farm’s barnyard. (Submitted photo)

For Everall, it was a flashback to an instance in 2017 where a similar complaint generated a visit from OSPCA agent Tex Ritter.

Everall noted the call came after local rain gauges measured over five inches of precipitation in a seven day span.

Ritter, known as one of the more stringent and diligent OSPCA agents in Ontario, couldn’t find any issue with the condition of the Cedar E Farm herd or the barnyard according to Overall.

“(Ritter) had no real issue in 2017. The cattle had access to water, minerals and feed. He basically told me to keep doing what I was doing, scrapping the barnyard up when I could get in there with the tractor and keep the bedding available, which it was,” Everall said. “Just keep up with the day-to-day chores was the message from him.”

There were no orders, no action plans and no need for a return visit for Ritter according to Everall who admitted to the Gazette the first instance was very hard on himself and his family.

Emotionally, it was a very stressful time and there’s feelings of shock and embarrassment even though everything is being possibly done to care for the animals he added.

“You are trying to do the best for you animals and care for them and you certainly don’t want that stigma of that you aren’t looking after them. It was all just very frustrating,” he said.

Flash forward two years, and much like 2017, water tables are high, Prince Edward County can’t seem to go more than a day without some amount of rainfall and another complaint was registered by a passer by.

Concerns the animals aren’t able to get inside the barn were among the points voiced to authorities by the complainant.

“The officer was very nice and completely respectful. He paid two visits that day, viewed the cows had access to the barn and the food. There were cows eating at the feeder and the ones that weren’t were laying on the straw pack,” Everall said. “His comment to me was that they seemed happy and weren’t in any type of distress.”

Farming his whole life, Steve Everall bought the home farm from his mother a couple of years after his dad, a former county councillor, retired educator and farmer Ron Everall passed away in 2006.

The young man has been carrying on the Everall farming legacy in North Marysburgh is whole life and is proud to have built a good reputation amongst his fellow county cattlemen, the Prince Edward County agriculture community as well as beef buyers.

“Over the last couple years when the cattle go to market, the days they go I’ve been able to pull the top price for the stockers of that category so I would say we have pretty decent animals here,” Everall said. “All farmers try to take pride in what they grow.”

That includes the junior members of the family as both Hayley and Ben are members of the Prince Edward County 4H club and have developed and groomed award-winning calibre show calves at the Picton Fair in recent years.

As the member of the OPP was leaving Thursday, Everall told the officer he would welcome anyone, including any person(s) making complaints, to stop by and show them around the farm he’s been living at his entire life.

“We would be happy to have anyone come by, show them around the farm and show that we are trying to do our best for our animals, our families and our community,” he added.