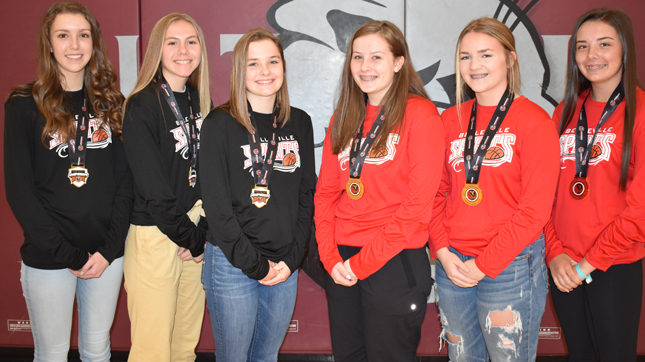 There was plenty of Prince Edward County power in a pair of provincial triumphs for the Belleville Spirits earlier this month.

The U 16 AAA Belleville Spirit club was tops at the Ontario Basketball Association’s Provincial Championships in Scarborough, running the table and winning all five games they played.

Meanwhile, the U 16 AA Spirit were also undefeated in Ontario Cup play in Nepean, capturing the Ontario AA championship.

Each squad boast a trio of county natives that also suit up for PECI in the Bay of Quinte Athletic Conference and are graduates of the County Clippers organization. Gracie Burris, Vanessa Wilton and Hannah Goad suited up for the AAA squad while May Kate Wilton, Emma Brady,  Lauren Smith and Holly Morton were members of the AA Spirits County Clippers organizer and PECI coach Rob Garden was thrilled for the players on both squads and happy they were able to experience provincial championships.

“This used to be the model and we would send secondary school players to the Spirits organization to further develop them,” Garden said. “Over the last few years we recognized early on that we had a strong group here with these players and they were able to play in the Clippers organization but we saw the potential and, in conversation with (AAA Coach) Tom Callahan and (AA Coach) Rob White, We felt there was a great opportunity to combine these kids this season, fast track their development further. It’s great overall for basketball in the area, great for PECI’s program and great for the players. At the end of the day, those are the things we strive for.”

While the Clipper organization continues to develop local basketball players through their tournament teams and will continue to do so, playing at a higher level can only help produce elite talent “When they go away and come back from the Spirits, they get great coaching, play with and against better players and that’s what drives high paced development,” Garden added.

“They worked hard, were good teammates and were a lot of fun coach. Hannah Goad was an aggressive player and was at her best in fast paced games. She was a very good three point shooter and love to attack the basket in transition,” Callahan told the Gazette via email.

Burris was strong in transition and always seemed to find the right spots on the floor.

“(Burris) is a very good offensive rebounder and finished well around the basket,” Callahan added.

Finally, Vanessa Wilton was a starter for a lot of the season and the coach found her a very smart player who understood the game and was very coachable. “Vanessa was a key contributor at both ends of the floor,” said Callahan.

While White was unavailable for comment, Garden said Smith, Grade 9, was one of the youngest players that’s ever graduated from the Clippers to move on to Belleville. “She’s got tons of potential,” Garden said.

Mary Kate Wilton has played both Spirits and Clippers in the past so 2019 was a return to Belleville for and Garden said the player improved greatly with more practice and floor time.

Garden added Brady was an emerging player and was originally selected by White as a role player, “She worked hard and worked her way into the lineup and got some very valuable playing minutes this season,”

Morton, a Wellington native, attends Eastside Secondary School in Belleville and takes part in that school’s foundations program. Prior to making the Spirits, Morton played five seasons in the Clippers program.