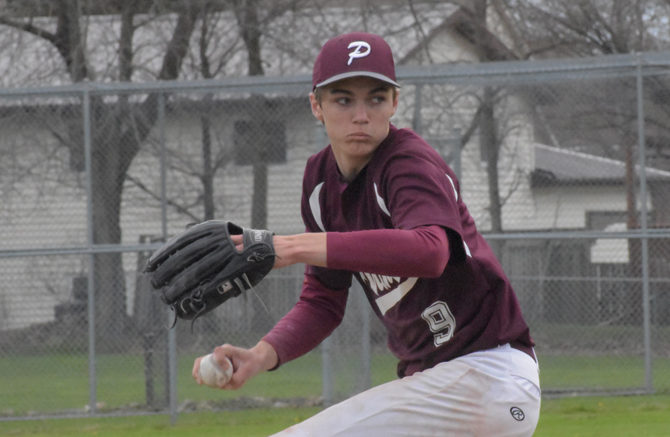 THE WIND UP- PECI Panther Will Ronan pitched four innings of one run, two hit baseball on Thursday at the locals topped the visiting St. Theresa Titans at the Field of Dreams in Wellington. (Jason Parks/Gazette Staff)

In a showdown that could be a preview of the 2019 Bay of Quinte baseball finals, the PECI Panthers managed to score three runs in the first inning against St. Theresa’s on Thursday afternoon at Field of Dreams in Wellington en route to a 6-3 victory.

With the win over the Titans the Panthers control their own destiny and, with a sweep of a double header against Centre Hastings (12:30 p.m.) and Nicholson (2:30 p.m.) Thursday at Melrose, PECI would place first in the Bay of Quinte Athletic Conference.

That first place finish would mean the Cats would host the Bay of Quinte Final Four in Wellington May 22nd.

Despite a grey day with threatening rain showers and strong easterly winds, PECI was able to get some timely base hits and clutch pitching to vanquish the Titans.

“On the positive, I was impressed with the offence,” Panthers skipper Matt Ronan told the Gazette. “We limited our strikeouts to four in the entire game so we did an excellent job of putting the ball in play. When you do that, good things are going to happen.”

With the Panthers clinging to a one run lead in the bottom of the fifth inning, it was Nolan Steen delivering a key one run double to extend PECI’s lead to 5-3. After Aiden Reddick was drilled by a pitch, Steen cracked a two base shot down the first base line that plated Reddick.

Steen would eventually come around to make it a 6-3 final thanks to a base hit off the bat of Nic McGrayne.

“Nolan came up clutch for us with a huge double just when they were starting to creep back into the game,” the coach added.

After erupting for three runs in the bottom of the first, it appeared the Panthers just might rout the visitors but the Titans managed to escape the inning trailing by just two. With St. Theresa’s scoring a single run in the top half of the first, a base hit by starter Will Ronan started a string of three singles with Ben Wells and Brodie Byford also getting in on the act.

With the bases loaded and one run across already, Reddick was beaned for his first of two HBP on the afternoon that drove in a run for the Panthers. Steen worked a bases loaded walk in the next at bat to put the Panthers up 3-1 after one complete.

From the hill, Will Ronan showed poised and escapability, especially in the third and fourth innings. In the top of the third, a two out base hit was no matter for PECI as the hurler delivered a perfect pick off throw to Byford at first base to end the inning.

“ Will and the entire team knew going in this was the most important game in our regular season and I was impressed with his poise,” the coach said.”He doesn’t get rattled and seems to able rise to the occasion.”

In the top of the fourth was one of the those moments where the PECI starter made some pitches that helped him escape any trouble.

With some help from his defence of course.

After walking the first two batters of the inning, Ronan was able to strikeout the Titans’ clean up hitter. Then, with runners at first and second, Thomas Davies made a spectacular catch in left field, tracking a line drive to the warning track before reeling it in.

“Thomas might have went 0-for-2 at the plate but that shows we have incredible depth and anyone can make a contribution,” Matt Ronan said. “If you aren’t hitting, you can still make plays in the field and that catch was crucial to our win. If the ball falls in there, it’s likely a whole different game.”

Another walk would load the bases but Will Ronan was able to reach back for a little extra and fan the next St. T’s batter to quell the uprising. “Our pitching was solid for the most part but where we weren’t sharp was on the defensive side of the ball,” the coach explained. “Too many times we were throwing behind the runner and when a team scores three runs on four hits, defence is usually a main factor.”