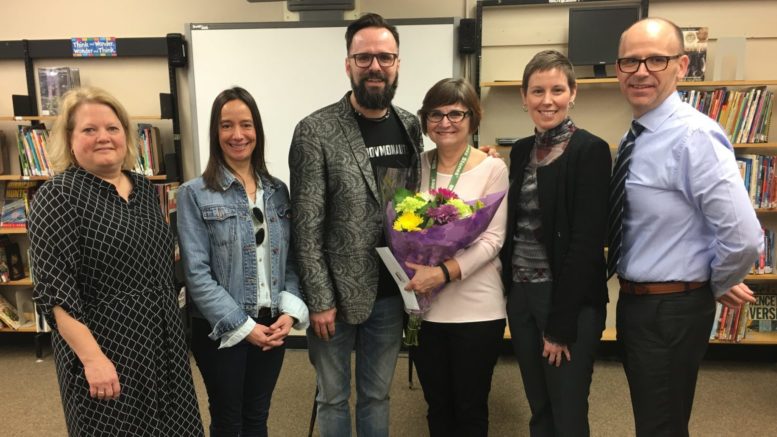 Congratulations are in order for a pair of PECI educators.

The Great Place Awards are the highest form of recognition by the Hastings and Prince Edward District School Board (HPEDSB). These prestigious awards recognize outstanding contributions by students, employees, parents and guardians, and community partners.

Fraser has been a member of staff at PECI for over 25 years and has shown her genuine care and concern for students, staff, families and community stakeholders.

“It is such an honour to win this during my final weeks of my last year,” Fraser told the Gazette. “It really makes retiring extra special and it’s wonderful to win it with Matt.”

Fraser affectionately and passionately refers to PECI as her home as she cares for both students and fellow staff as she does her own family.

“As a renowned Student Success lead teacher , Fraser is respected for her ability to go over and above for those who often do not have a voice or the means to express their voice, to ensure that they enjoy each day,” said HPEDEB Chair Shannon Binder.

Fraser exemplifies the golden rule of treating others in the way you want to be treated.

On top of her heavy workload, Fraser has volunteered to organize, create and purchase the costumes for the secondary school play at PECI for the past 10 years, and often paying out of pocket and donating the cost of the costumes to the production.

Fraser has supported countless trips and excursions, sat through many cold and soggy rugby games cheering on her players to ensure that students had opportunities that they might not otherwise have and while she is not a rugby or gymnastics connoisseur, the educator has coached both of these sports for multiple years and always strives to grow, learn and be a positive role model for students.

“I would like to thank all my colleagues who took time to create the nomination and to Rob Garden for initiating the nomination,” Fraser said. “PECI is that special place where your former students, like Garden, become your friends and end up teaching you so much. I am very lucky to be able to work with so many amazing people.”

Sheahan exemplifies all the character attributes that HPEDSB seeks to teach and he actively demonstrates those attributes to students both in and out of school.

“Jennifer Cobb got the nomination rolling and told me the work I’m doing means a lot to her,” Sheahan said. “I’m happy parents and community members appreciate and recognize the amazing work happening at PECI.”

Sheahan gets involved in after-school activities such as coaching, improv and drama trips. He also fundraises so that students can attend without barriers and bring a vibrant variety of local artists to mentor and engage with students.

“It was such a surprise to be nominated,” expressed Sheahan. “I am honoured and humbled to be recognized but know that there are so many amazing people I get the pleasure of working with everyday who deserve this nomination as well.”

Every year Sheahan organizes a drama production held on December 6, the National Day of Remembrance and Action on Violence Against Women.

Partnering with community agencies including Alternatives for Women, Sexual Assault Centre Quinte and District, 3 Oaks and Take Back the Night, he enables students to connect with feminist organizations which are working directly to end violence against women.

These teachers are very deserving of this award and to have the recognition of all the hard work they do for their community Binder added.