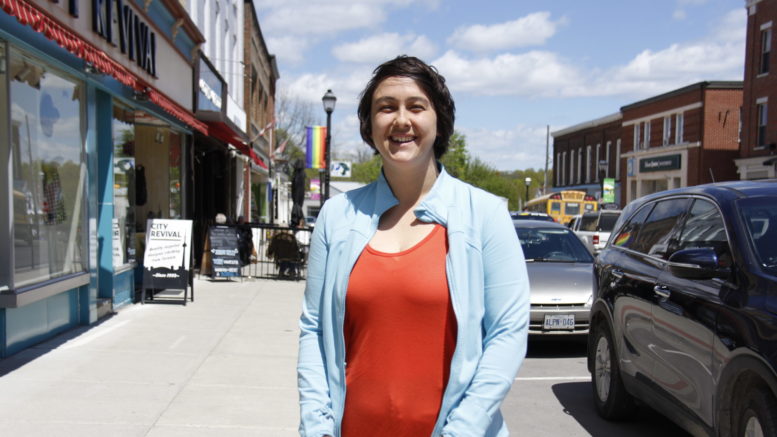 RINGING BELL - Picton's Stephanie Bell will be waiving the NDP banner as the party's candidate in the 2019 federal election. (Desirée Decoste/Gazette Staff)

The Bay of Quinte riding NDP party has chosen a county resident to be its local face in October’s federal election.

Stephanie Bell of Picton, introduced to the media after being acclaimed at the Thursday evening’s riding association meeting Belleville, was described as a smart, hard-working young lady who really cared about the well-being of others.

“It’s such an honour and privilege to have people believe in me at the level they do,” Bell told the Gazette when she dropped by the office on Tuesday afternoon. “It’s kinda surreal but not unreal. I know I’m capable but I’m overwhelmed with feelings of gratitude towards people who thought I was a worthy person and believe I could do a good job at this, so now I want to deliver on that.”

Bell currently has a number of jobs including as a server/bartender, gardener for hire and is apprenticing in a bicycle repair shop.

Twice a candidate for Picton in the last two municipal elections, Bell  has travelled to Palestine, Guatemala and Israel to learn more about various cultures and ways of the world.

“What I have come to really respect in (Bell) is she is a very genuine and honest person with a great deal of enthusiasm to really make a difference and a change,” President of the Bay of Quinte NDP, Joanne Belanger told the Gazette “She wants to do politics differently and certainly working towards a better society for all Canadians and all residents of Bay of Quinte.”

Bell has some political campaign background as she’s ran twice locally for a place at the horseshoe at Shire Hall and ready to put her experience to good use.

“The NDP Party thought it would be a good chance for somebody young and female to try it out and get some experience,” said Bell “They want to have someone who is stronger for now and the future and I have a little bit of free time so it works for me.”

Since the age of 10, Bell  has been reading about climate change and its effects.

For her climate change should be the number one issue in the campaign.

“I think our party is looking for diversity to have representation from all different aspects of life so people that are elected represent the people that live here as a general population,” Bell stated. “I think the NDP is actively seeking those people out, and their policy around finding candidates is really impressive and that made me believe becoming a candidate was a good idea.”

Other issues Bell cares about deeply are affordable housing and good jobs.

She added she was disappointed that the Liberal party chose not to pursue electoral reform and stick with the first-past-the-post system.

“I know it happens that people make commitments all the time and break them,” Bell said. “But a change in our electoral system is a commitment we need to hold onto and address. If we don’t have electoral reform we will never have an equitable fair politics in Canada.”

If you see a young woman this fall supporting the NDP orange and riding a bicycle on the roads of Bay of Quinte, it will most likely be candidate Bell.

“I encourage people in the Bay of Quinte area to keep an eye out for Bell,” stated Belanger “I think we have a very, very fine candidate who will certainly make the election period very interesting and she’ll bring some fresh enthusiasm and energy to her campaign and our team is very excited to have Bell as our candidate.”

Although Bell doesn’t drive, she admits her campaign volunteers will be driving her about in vehicles should the campaign require it.