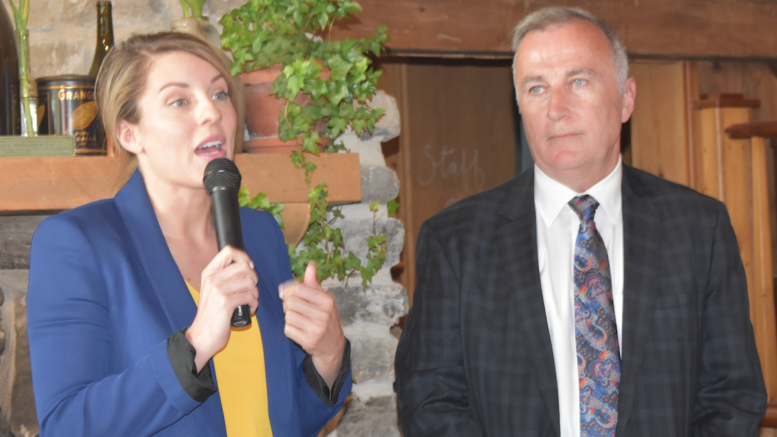 The sun was setting over well-tended grapevines and a room full of expectant guests when the federal government announced their new national Tourism Growth Strategy at the Grange Winery Tuesday.

The Minister of Tourism, Official Languages and La Francophonie the Honourable Melanie Joly delivered a speech regarding the three-tiered approach to tourism to a room full of community members with a vested interest in the tourism sector. 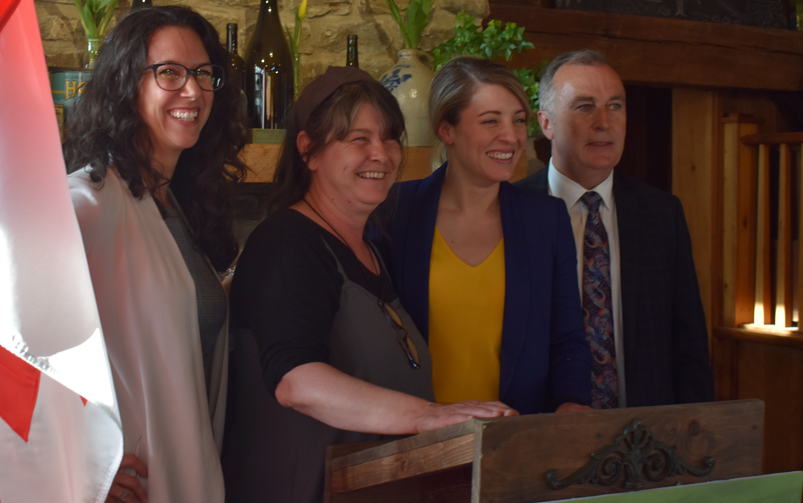 Earlier in the day Joly cited a recent interview in which she was asked about the best tourism destinations in Canada. She mentioned hotspots from the east to west in Canada and although her first visit Prince Edward County was Tuesday, she mentioned the municipality as a noteworthy place she was really looking forward to visiting.

Though Prince Edward County has burgeoned as a tourist destination in recent years with articles in Vogue, Chatelaine and the New York Times amping up the cultural currency of the island community, there has been a lack of federal support for these ventures.

“For a long time, the tourism sector has been quite snubbed at the federal level,” Joly noted. “Prince Edward County is a beautiful area and we need to make sure the world sees more of it. Canada used to be a top 10 destination in the world. Now, we rank at 18.”

The new strategy is comprised of three pillars. The first pillar involves building tourism in Canada’s communities. This means supporting growth in regions apart from the three main tourist destinations of Vancouver, Toronto and Montreal. To this end, the government has announced a $58.5 million dollar infusion of money, the Canada Experiences Fund, to enhance the products and experiences that small communities may offer to tourists.

This money will be allocated to regional agencies, all of which now have a mandate to promote tourism. Minister Joly explained a key part of the new tourism strategy is focusing on developing sustainable tourism. For many places in Canada, that will mean elevating experiences and products to help people enjoy winter and the shoulder seasons.

In order to achieve this goal, the government has created Regional Tourism Investment Groups (RTIs) to help small-medium sized enterprises grow. RTIs are part of pillar two of the new tourism strategy which involves attracting investment to the visitor economy.

“This will be the first time the federal government plays a leadership role by investing in tourism to show we trust the people in that sector and to fuel growth of that economy as well as the middle class,” Joly added.

Within their new strategy, RTIs will help to create mega-destinations but they will also be based on the fact that people in regions decide what priorities should be supported. Federal government agencies will be meeting with those in the tourism sector in a given region. Agencies involved will be Parks Canada, Canadian Heritage and the Business Development Bank of Canada, to name a few.

“Prince Edward County has been developing fantastic tourist experiences over the past 20 years,” said Joly, “But we know we can have more growth for people in these destinations, meanwhile have tourists that are coming and investing, creating not only growth but sustainable growth.

Looking around at the crowd the minister of tourism was careful to add the concept was based the idea to increase tourist spending.

“We don’t want to go into over-tourism,” Joly added. Pillar three of the new strategy revolves around a renewed focus on public-private collaboration. In laymen’s terms, “Tourism is no longer at the children’s table. Tourism is at the adult’s table,” said Joly.

The government will be able to get involved and look at bigger issues such as labour shortages, cost of travel, and infrastructure to help solve previous barriers to growing the tourism sector.

“The government is an ally of the tourism sector,” Joly effused.

Lesley Lavender, Executive Director of the Chamber of Commerce spoke with the Gazette once the din of cameras and the crowd cheering had faded and said Tuesday’s announcement affects the membership’s substantiability as a community.

“Rising tides raise all boats. Although we are a shining example of what can get done when the community works together, I’m excited about this opportunity will allow our community to grow further,” Lavender said. “I’m more excited to see substantiability in that growth and to have longevity as a tourism community. I look forward to boosting our tourism in the shoulder and winter seasons as well.”

Phil Bender, President of the Chamber of Commerce, told the Gazette he excited to see the shoulder and winter seasons identified as having potential for increasing jobs year round.

“Prince Edward County has abundant jobs in the spring, summer, fall, but later in the shoulder season or winter, we don’t have those jobs. So, if they could focus on developing the off-season for us, that would create more jobs for us. It’s what we need,” said Bender emphatically.

With their new strategic plan, the government aims to create 54,000 jobs in the tourism sector by 2025.