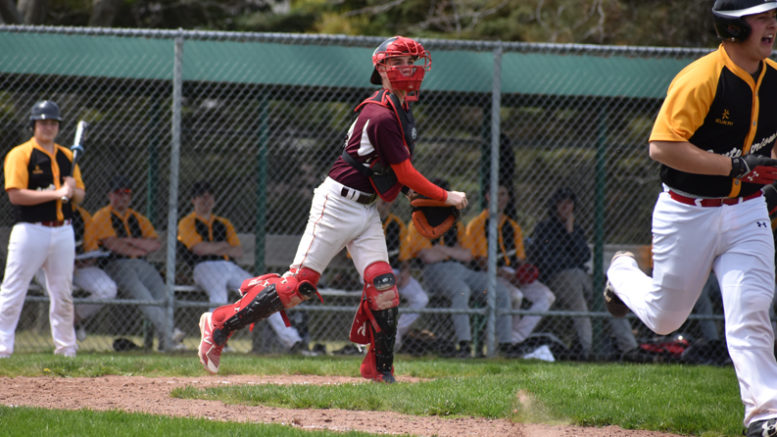 IN THE NIC OF TIME PECI backstop Nic McGrayne fires to first base after a Centre Hastings batter had swung at strike three during the Panther’s 13-4 win over the Centurions on Thursday. (Jason Parks/Gazette Staff)

While the details of yesterday’s Bay of Quinte Baseball championships will be poured over in next week’s edition of the Picton Gazette, there was no arguing the club was hitting on all cylinders heading into the one day playdowns with a Central Ontario championships birth on the line.

The club clobbered the Centre Hastings Centurions and the Nicholson Crusaders at Belleville’s Rotary Park on Thursday as the County Lumber Company continued to blast the ball all over the diamond.

In the opener of the three team double header, PECI had to play comeback after falling behind 4-3 in fourth inning, scoring ten runs in the next two innings to take the game 13-4 in six complete.

In the closer, PECI took a 3-1 lead through two complete and then scored a dozen runs in final three innings to clip the Crusaders 15-1.

While the club could still use some polish on the defensive side of things, PECI skipper Matt Ronan said the club might be the deepest hitting bunch in the ten year history of the program.

“We continue to hit the ball really well and it’s one of the strongest hitting teams we’ve had since 2009,” Ronan told the Gazette.

Ronan pointed to Cooper Rogers as one of the players that’s emerging as a potent force in the batter’s box. Blessed with speed and great batting eye, Rogers went two-for-three in the lead off position for PECI in the opener against Centre Hastings. On the base paths, Rogers plated three times and drove in three runs.

“He’s a good ball player and has the potential to be a really good one if he sticks with it. His baseball IQ is really developing nicely and he’s a student of the game,” Ronan said. “He’s always looking at the previous play to pick up the next step on how to improve.”

Rogers combined with backstop Nic McGrayne who went three-for-three at the plate and added a base-on-balls for good measure.

Veteran Ben Wells picked up the assignment in the opener and navigated the first three innings with little trouble, stranding a pair of runners in scoring position.

But in the fourth, some costly errors led to four Centre Hastings runs and a sign PECI needs to take care of it defence if it has designs of qualifying for the Ontario Championships in early June.

“Ben did well through three innings but got roughed up in the fourth inning,” Ronan said. “He was pounding the strike zone which we asked him to. If we mixed up the pitches a little better maybe we don’t give up as much but it was important for us to have some work in the filed.”

Down a run going into the top of the fifth , PECI batters Thomas Davies and Kaleb Stacey would work back-to-back walks to lead off the inning. The lineup turned over for Rogers who singled to load the bases and McGrayne would belt a double to clear the sacks and give the locals a lead they would never relinquish.

Wells would drive in Rogers to help his cause and then score himself after swiping a pair of bases, making it an 8-4 PECI lead through five and a half.

Nolan Dawson would come aboard and hurl two spotless innings to close out the contest. In the second game and the final contest of the regular season, PECI was able to empty its bench against the Nicholson Crusaders. “It was really good to get everyone on the field and into the lineup,” Ronan said. “With 19 players it can be tough but everyone was ready to play when called upon.”

Torin Sanders would get the win for the Panthers, surrendering PECI’s only run in the second inning. Logan Blower (2) and Brodie Byford (1) were solid in relief.

Nolan Steen blasted a pair of doubles for the Panthers in the rout.

PECI exploded for six runs in the top of the fifth inning as Stacey, Kacey Cocklin, Ethan Dewey, Wells, Rogers and Cale Carter all came around to score.

Sanders, Davies Max Lindsay and Cocklin would add on in the top of the sixth inning as PECI finished off the lopsided affair.

In terms of the Bay of Quinte Championships, Ronan said the outcome would come down to pitching and who was ready to play.

“Our pitchers need that first pitch strike and that will allow them to navigate the at bats better,” Ronan said.

While top seeded PECI wasn’t overlooking their first round opponent, virtually everyone is expecting the tournament to come down to PECI and St. Theresa’s.

“They are a good team and they have a solid core of rep players. For us, the key will be to put the ball in play, put pressure on the defence and play a low risk game by not throwing the ball around and behind runners,” Ronan added.

A win in the Bay of Quinte Semi Finals would punch PECI’s ticket to the Central Ontario Secondary School Association’s playoffs to be held at a yet-to-be determined site in the Peterborough area May 29th.