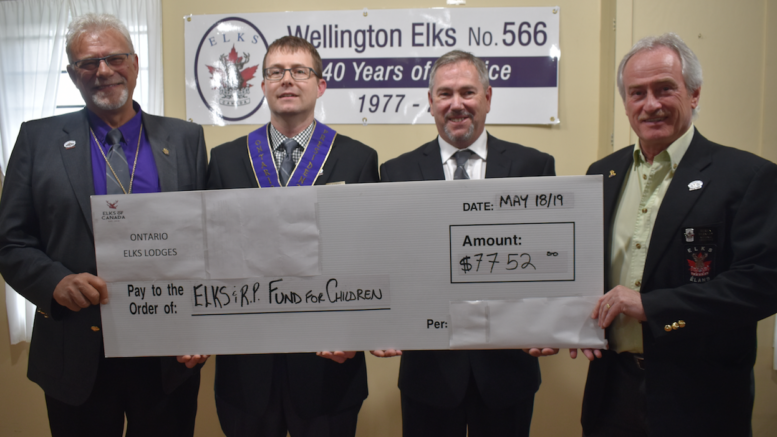 The Wellington Elks lodge rolled out the red carpet this weekend as the local service club hosted the 2019 Ontario Elks Association Provincial Conference.

And at Saturday night’s President’s Ball at the Allisonville Hall, members representing lodges from all over Ontario didn’t have to look too far to see the new provincial president.

Wellington Lodge member Randy Vincent was installed as the incoming Provincial President at the conference conclusion and is excited to begin his term.

“It’s a great honour to be where I am today, I joined the lodge just ten short years ago and went through all the positions, joined he Ontario Elks Association in 2011 and it’s been a great experience,” Vincent told the Gazette.

As to what keeps him involved in the service club, Vincent explained simply it was “The feeling you get in your heart in indescribable when you see what we do for the community.”

Vincent said he plans to visit ten of Ontario’s 13 lodges and try to spread the word on the good things the Elks organization does and how the club helps communities.

“And I know I have all my Elks brothers and sisters to call on when I might need advice. We also hope to encourage and increase membership,” Vincent explained.

In addition to the regular business of the annual conference, the event also served as an opportunity for the Elks Lodges across Ontario to present funds to the Elks of Canada’s national charity The Royal Purple Fund.

The event featured visits from current Grand Exalted Leader and National President Ron Potter and incoming Ruler Potter explained Lodges across Ontario and Canada come together, pool extra funds and present them to the Elks National charity Royal Purple Fund for Children with the main focus on hearing and speech.

“When socialized medicine came to Canada, hearing and speech was never part of it. The Elks organization have forced the provinces to have infant hearing screening,” Potter explained. “That way we know right away if that child has an issue and we can start to address it earlier and that child hopefully won’t fall behind. Total loss of hearing, speech impediments, we help with that for any child in Canada.”

Potter added every lodge in Canada is working so hard day in and day for their home community and 80 per cent of what they raise stays there however the lodges also support this national strategy that means so much to the organization.

Local Elks President Pat Clark explained cochleare implants, hearing aids and speech therapy are just some of ways the Elks have helped address child hearing issues and he encourages parents in Prince Edward County to get in touch with Wellington Lodge if their child has been identified as having speech or hearing issues.

“If there’s something small, we can address it from our own funds but if it’s a largest ticket item, we can apply and have access to the Royal Purple Fund for Children,” Clark added.

“It’s life changing,” Potter added. “We have a lot of fun as Lodges and groups of people but when you see child, two or three years old, begin to function normally thanks to hearing aids or implants or therapy, it’s huge and it’s emotional. We’re there when that child comes out of that hearing centre and it’s simply incredible the emotions you get to see and feel.”

Speaking to growing the organization membership, Potter said volunteers are easy to get.

Members are the tougher road.

“You can get anybody out for an afternoon if you have a project on the go. What we need to do better and the same can be said for all service clubs in Canada is attract and retain members. The best way to do that is to share the stories of how we impact the lives of Canadians everyday,” he added.