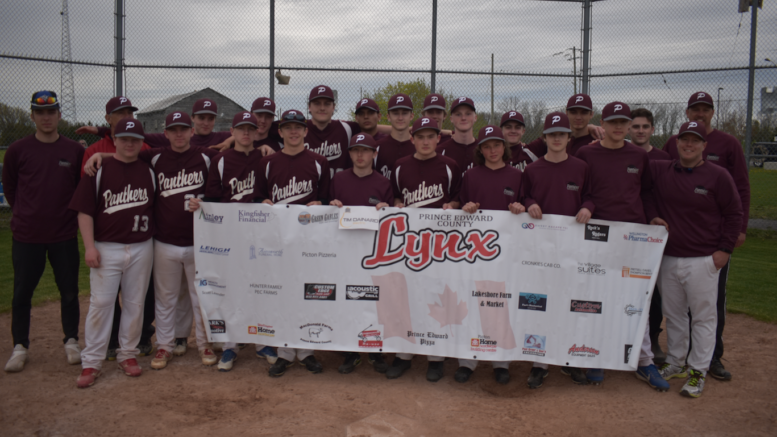 ON TOP- The PECI Panthers baseball team is the Bay of Quinte's best in 2019. (Jason Parks/Gazette Staff)

It took a squeaker to get there but once the PECI Panthers baseball club was on the grand stage of the 2019 Bay of Quinte championship, the club left little doubt of who was the best secondary school team in the area.

After slipping past the Centre Hastings Centurions 3-1 in the semi finals at Field of Dreams in Wellington on Wednesday, PECI faced a surprise foe in the form of the Eastside Secondary School Ravens after the Birds had knocked off the St. Theresa Titans earlier in the day. 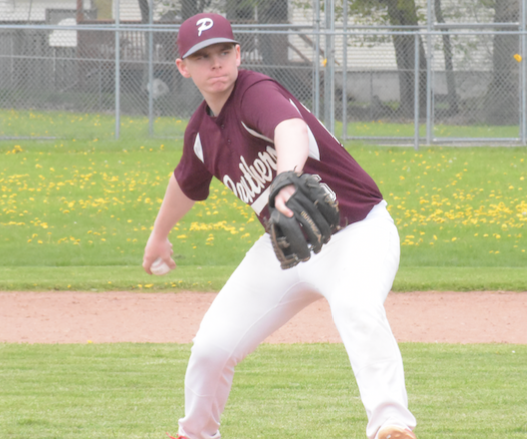 While PECI would take some time to get the bats in full swinging motion, the Panthers eventually got to the Ravens pitching in the late stages of the Bay of Quinte final and defeat ESS in a bit of a laugher 12-2.

PECI skipper Matt Ronan said the club was really happy with Wednesday’s outcome as the Panthers had set an internal goal of being the top team after the dust had settled in the Bay of Quinte Athletic Conference in 2019.

“It’s an accomplishment we started planning for in late February so to reach this point is special,” Ronan said.

Crestwood and St. Peter’s were the clubs that qualified through the Kawartha region playoffs.

“We know that both organizations are very solid teams,” Ronan said. “At bat, our goal will be to put the ball in play and put pressure on the defence. On the mound, our pitchers need to take control of the at bats by throwing strike one early in the count and pound the strike zone.”

While the Panthers offence has been the storyline for much of the regular season, it was the Panther pitching and defence that was relied upon to ensure the club even made it to the Bay of Quinte finals.

Playing a Centre Hastings Secondary School team they had defeated 13-4 less than a week prior, PECI found itself in a different ball game on Wednesday morning. 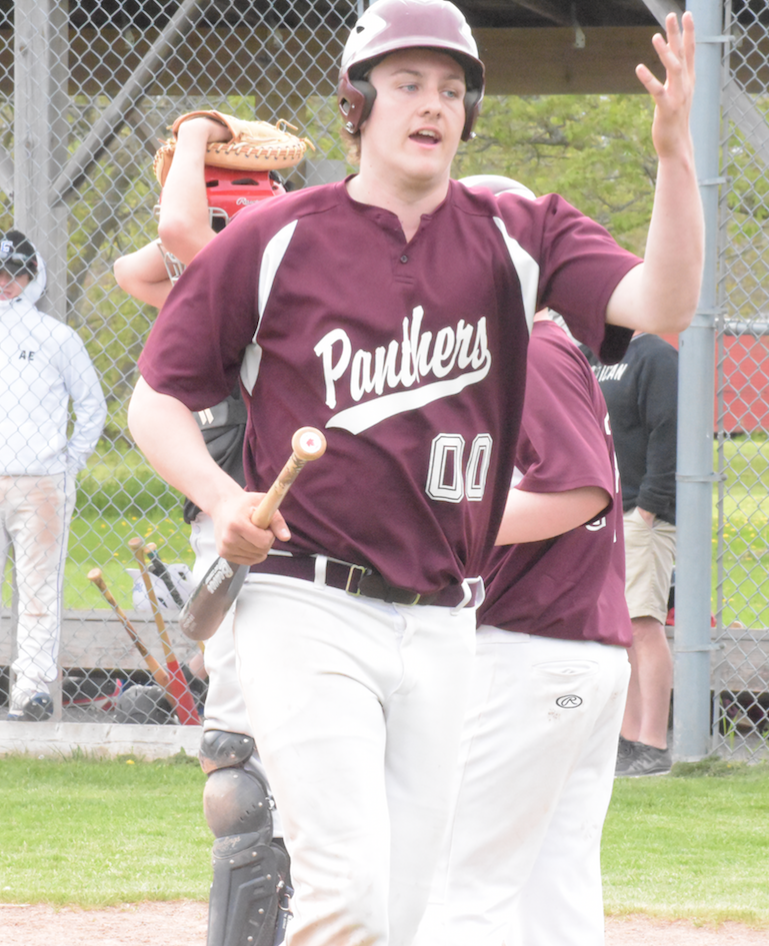 A misplayed fly ball in the of the first inning gave the Cents an early 1-0 lead off starter Will Ronan.

A Nic McGrayne single and a base on balls to Will Ronan followed up with a pair of stolen bases would put runners in scoring position for Brodie Byford who stroked a one out RBI single to push his team ahead 2-1.

Ben Wells would follow up with a single of his own and stole second base to recreate the situation of runners in scoring position with less than two outs but PECI was unable to capitalize after a pair of strikeouts ended the inning.

After Will Ronan settled  down and retired the side in the top of the second and third innings, PECI grabbed some insurance in the bottom half of the third.

Backstop McGrayne’s second consecutive one out single turned into a double with a steal of second.

McGrayne would take third on Ronan’s base hit and then scamper home off a wild pitch to make it 3-1 PECI.

Normally a team with a keen batting eye and patience at the dish, PECI would strike out an uncharacteristic ten times in the contest and was only able to get a single runner past first base in the final three at bats.

“That’s certainly not something we are known for but when the umpire has a big strike zone, it’s something we need to figure out and adapt to,” the coach explained. “We looked at strike three in that game way too much to be honest.”

Luckily, the big strike zone paid dividends for PECI on the defensive side of the ball. 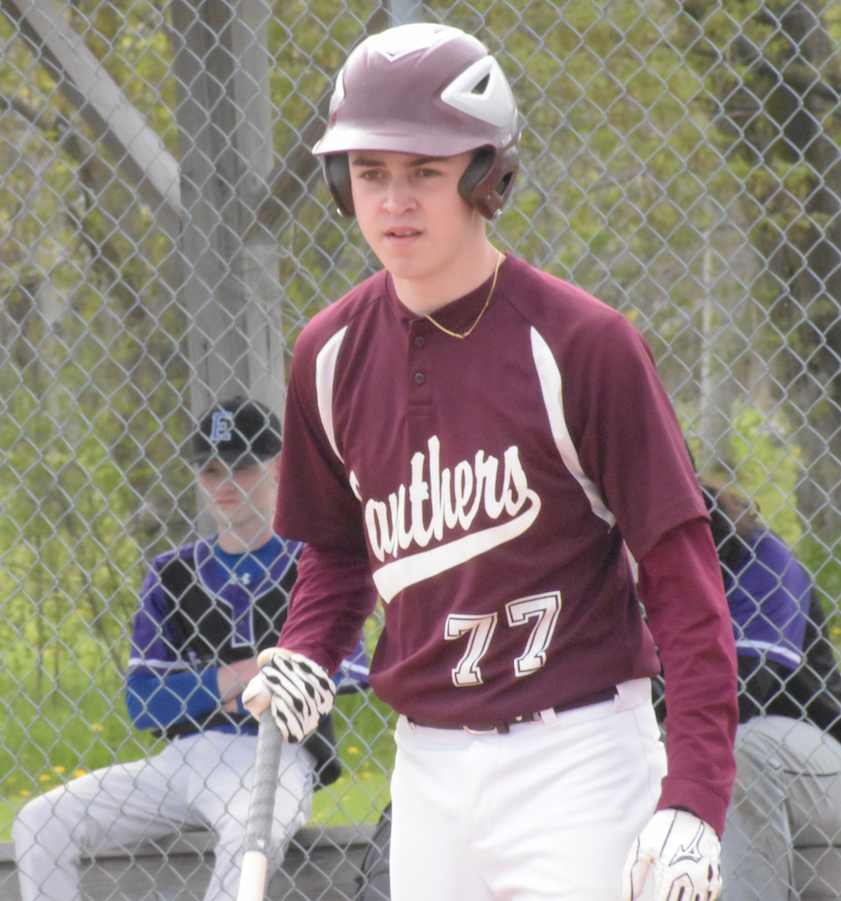 Byford came into the game to relieve Ronan after four complete innings and, after giving up a leadoff walk, struck out the following six batters.

In the top of the seventh and PECI holding fast to a 3-1 lead, Byford would get the first two Centurions on ground outs to the right side of the infield and then closed it out in a flourish, striking out the final batter of the game.

In the second game of the day and PECI’s success hinging on its pitching depth, championship starter Ben Wells would dance through the rain drops literally and figuratively on Wednesday afternoon, allowing base runners in all four innings he pitched but only surrendering a single run.

“A deep pitching staff and being able to have guys that produce when you play in these tournament scenarios is what sets teams apart at this level,” the skipper said. “To be able to rely on the arms we have through our staff is key.”

After a scoreless first inning, Byford would lead off the bottom of second inning with a walk, taking second in a stolen base and then scampering home on a Wells base hit through the left side of the infield.

Wells would swipe second and third and looked to be in with PECI’s second run when a pitch made it to the backstop but the ball bounded perfectly to the Ravens catcher who flipped it to the pitcher and a tag was applied at the plate.

While Wells might have beaten the tag in a could of dust, the umpire rung up the Panthers’ pitcher for the first out of the game.

The out was huge as the Ravens were able to get strike outs on back-to-back PECI batters with runners at second and third to quell the PECI uprising.

The Ravens finally touched Wells for a single run in the top of the fourth inning as ESS combined a walk, a steal, a passed ball and a single to push their first run across.

With runners on first and second and his outing coming to a close, Well was able to induce an infield pop fly to first baseman Byford to end the threat and keep the game at 2-1.

“(Ben) showed that veteran leadership and confidence in a big time spot for us on Wednesday,” Matt Ronan said.

While he was done on the hill for the afternoon, Wells wasn’t done at the dish and would lead off the fourth inning with a single and promptly stole second.

An Aiden Reddick ground out moved Wells to third and then a Nolan Steen ground ball  to the left side of the infield pushed the eventual game winning run across home plate.

With Wells spent, PECI turned its fortunes to Nolan Dawson and the junior didn’t disappoint.

“Nolan is just now starting to get his innings in and he’s pitched about a handful this season,” Matt Ronan explained. “He’s done well and we hope he’s a factor for us next season as he develops his arm.”

Dawson would induce a lazy fly ball to centre field and then had back to back strikeouts for PECI’s first 1-2-3 inning of the game.

PECI’s Thomas Davies would get beaned with one out in the bottom of the fifth and take second on a stolen base.

Taking third on a ground out, a Texas-league double off the bat of McGrayne would plate Davies for a 4-1 PECI lead.

A walk and a hit would combine for ESS’s second run of the game in the top of the sixth inning and move the contest to a two run game but PECI would turn the game on its ear in the bottom half of the frame.

The Panthers would send 11 batters to the plate in the inning with a two run double by McGrayne being the biggest knock of the frame.

With McGrayne dancing off second, Ronan crushed a triple off the fence in centre field to get the score to 11-2

Ronan was 90 feet from home when Reddick yanked a ball over the infield for a base hit and brought in the run that put PECI ahead by 10 and ended the contest on through the mercy rule.

A happy if not over jubilant Panthers squad flooded onto the field to celebrate and shake hands with the Ravens who did extremely well in their first year of competition after the amalgamation of Moira and Quinte to make the Bay of Quinte final.

The upset in the other semi final certainly was a nice piece of coaching by Dave Cleary who readers around these parts might know as the friendly United Postal Service driver.

“They really started to believe and build confidence over the regular season and you could see the Titans were going to have their hands full,” Ronan added. “They had a tremendous tournament and just ran out of steam at the end. They were right with us through most of the game and we really had to bear down in those early innings.”