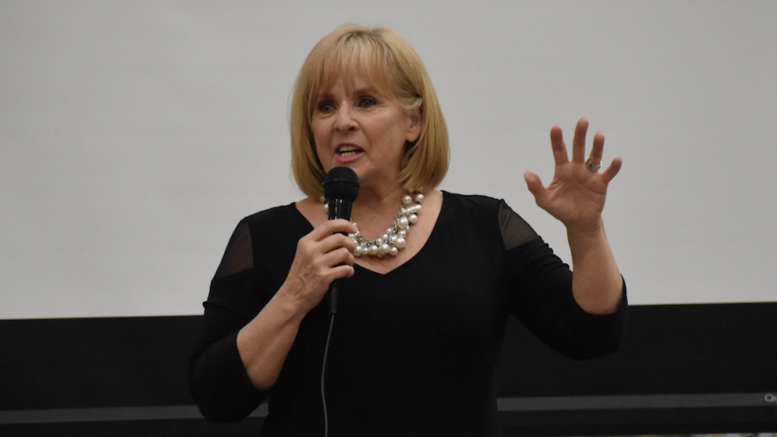 After a morning comprised of wellness related demonstrations, such as a smoothie making demo, mobility and fitness demos and a healthy breakfast demo, the guests of the wellness fair enjoyed a salad bar buffet-style lunch.

General Manager of the Wellings Rachel Henry estimated the attendees, numbered at around 80, were about half residents and half members of the public who had come to take part in the event.

After enjoying their lunch, the residents and guests alike sat in wrapt attention to listen to Donovan speak. STANDING STRONG – (L-R) Rachel Henry, General Manager of the Wellings Picton, invited Kathie Donovan, to speak at the recent Wellness Fair about living with purpose, and about her new book, “Unconform: Harnessing the Radical Power of Courage”. (Sarah Williams/Gazette Staff)

Donovan, a former co-host of CTV’s Regional Contact had ventured from Ottawa to attend the wellness fair being held at the Wellings.

“Pause right now and think of three things you’re grateful for…how about your heartbeat? How about your breath?” Donovan asked.

A stillness blanketed the audience as Donovan implored them to reflect.

That is seemingly simple advice, but also, powerful advice as evidenced by the captivated audience.

The topic of Kathie Donovan’s talk at the wellness fair was, “The Art of Aging Gracefully: How to be Seen, Heard and Valued in Three Easy Steps”.

Throughout the discussion, she implored the listeners to practice gratitude in their everyday lives.

“You have a face only a mother could love,” Donovan said to the crowd. This was a common adage that the motivational speaker heard growing up.

As she explained, her parents both suffered from undiagnosed depression. This imbued Donovan’s childhood with negativity and consequently instilled much fear.

That fear affected Donovan until she learned to turn that fear into compassion for others. She explained why her parents may have experienced depression and urged the audience to let go of the negativity that others impose upon then.

“What other people think of you has none of your business,” added Donovan.

Now, the author and speaker believes that you must “surrender the stories that don’t serve you.”

Gesticulating wildly, one of her final take-aways was that “Our time is our gold. Compassion is an endless resource, but time is not. It is limited.”

Donovan added we must use what compassion we do have to not only enrich our own lives, but also that of others.

As Donovan spoke, Henry handed out copies of the speaker’s latest book, Unconform: Harnessing the Radical Power of Courage.

Once the speech had concluded, Henry spoke to the Gazette about why she chose to bring a motivational speaker to the Wellings for a wellness fair.

“The Wellings is all about wellness, whether that is physical or mental wellness,” Henry said.

Though the weather did not cooperate, the guests of the fair had planned to plant tomatoes during the afternoon and were led through walking exercises by Tracey Powers of Fitness Powers.

Henry said she was hoping to make this a yearly event.