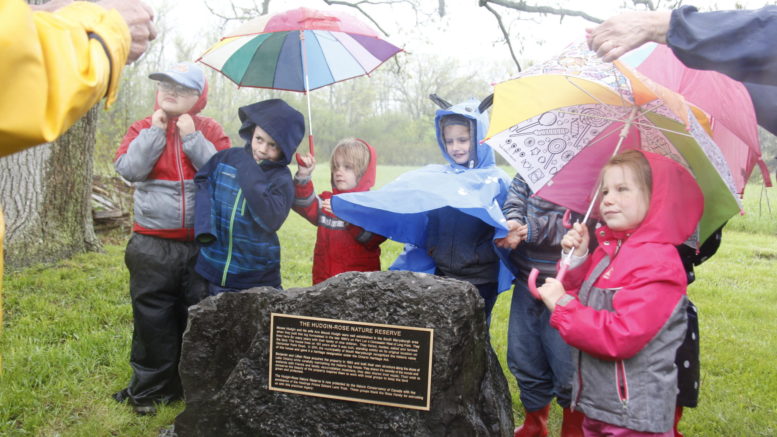 CONNECTING WITH NATURE School children from Bellevilles Sir James Whitney School for the Deaf were in attendance at the Hudgin-Rose property on Tuesday morning. (Desirée Decoste/Gazette Staff)

Tuesday morning was wet and muddy on Ostrander Point Rd. but that didn’t stop the public from celebrating announcement by the Nature Conservancy of Canada (NCC) that the organization and partners were officially conserving 31-hectares (76-acres) on the Hudgin-Rose property on the south shore of Prince Edward County.

As was first reported in the Gazette on Nov. 6, 2018, the NCC along with help from the Hastings Prince Edward Land Trust have purchased the block of land which is adjacent to the 198 hectare (490 acre) parcel that was secured by the HPELT group a few years ago.

With additional crown land in the area and the Prince Edward Point National Wildlife Area due east, the ecologically sensitive lands, which remain the last piece of largely natural north Lake Ontario shoreline, are slowly being removed from the threat of development.

The area is a collection of alvar, grassland and wetland habitat for species designated under the Species at Risk Act such as the endangered Blanding’s turtles, monarch butterfly which has special concerns and eastern whip-poor-will (small bird) which is threatened.

The landscape is unique as it has a long human and natural history.

Originally settled by the Moses Hudgin family, the property contains a historic log home that dates back to 1865. Later, the land and building was cared for by the Rose family and their stewardship led to the heritage designation for the home.

Members of the family that helped settle the property so many years ago were in attendance on Tuesday.

“This is fantastic, the number of people here on a horrid wet day, coming down one of the most interesting roads we have in the county,” said Stuart Bailey, acting mayor. “On behalf of Mayor Steve Ferguson who is part of the South Shore Joint Initiative just as I am, thank you all for coming. I think it’s fantastic that we do have Mr. Ben Rose here and five generations of people from the Hudgin family.”

Program Director Mark Stabb explained the NCC is a land trust and their goal is to find places to protect across the country.

Since 1962, the not-for-profit group has helped preserve over 74,400 hectares of land in Ontario and done so with the assistance of the public and like-mended groups such as the HPELT.

“We always do it almost inevitably in partnership with others, so either a willing land owner who wants to make a donation, a funding organization or other local partners as well,” explained Stabb “Here HPELT have been doing the hard slogging to acquire land for conservation from Hastings all the way down here to the south shore which has been one of there real focal points for their work over the years.”

HPELT offered to try and help the Rose family in some way to save there property, it took a little longer than they thought as there resources are currently constrained.

Eventually, with the assistance of the NCC, HPELT developed a plan to move forward. 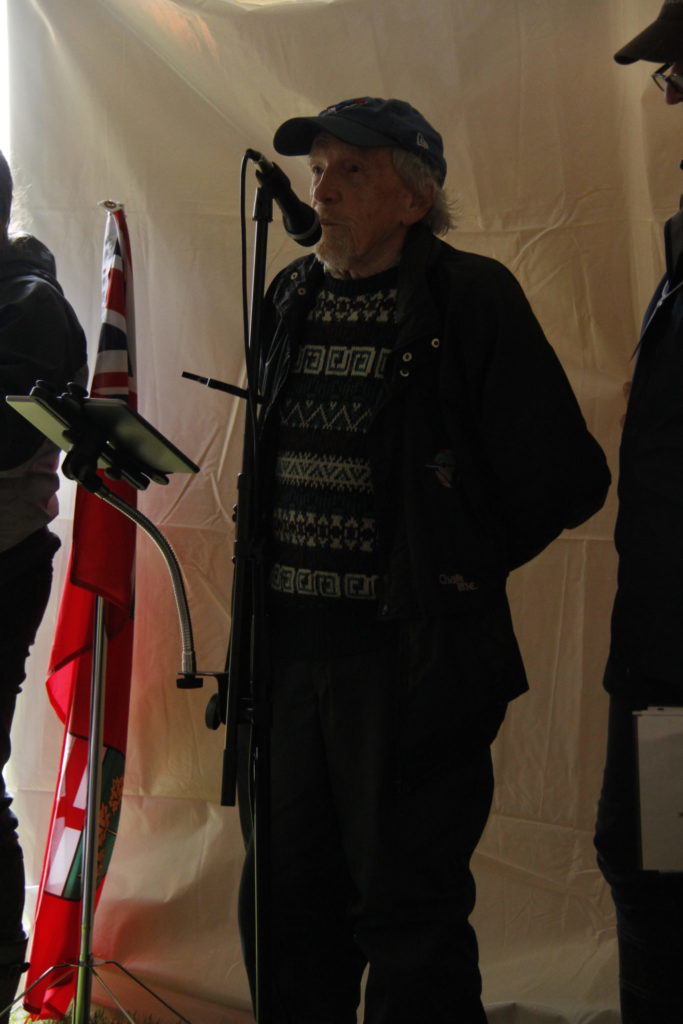 Ben Rose of the Hudgin-Rose property thanked everyone for attending the event and it will be something he will never forget. (Desirée Decoste/Gazette Staff)

The partnership HPELT has with the NCC to raise money for a project they are involved in is very unique.

Another partnership the NCC has had over the years is the Federal Government, which the NCC matches their donation dollars 2-1 and sometimes 3-1.

“Currently the federal government has a large initiative to support land acquisition across the country and their funding did help match the private funds that came in for this acquisition,” Stabb stated. “There was a new grant announced that will be helping us acquire land in the future on other properties as well.”

There’s an international program called the North American Waterfowl Management Plan that enables U.S. dollars to come to Canada to protect wetlands as it then produces ducks that migrate throughout the year.

At the property, Stabb explained there is already planning and work underway.

“Some amazing wetland conservation work has been done with that support and it’s quite amazing.” said Stabb. “We’ve already had people lining up to help take care of the building on the property and even take the next step towards some kind of restoration.”

Ben Rose, of the Hudgin-Rose property talked about how his late wife Lillian and himself were so fond of the property they bought in 1967.

“We started out thinking we would like a music camp but we found out when we stayed in the old log house, to have the hydro put in was gonna cost us just as much as we paid for the land and we couldn’t afford it so we decided to keep it as a summer holiday place,” Rose recalled. “I really appreciated everyone coming out on such a wet day, I don’t know most of the people here personally but am really grateful for you all making this a day I’ll never forget.”

Bay of Quinte MP Neil Ellis congratulated the NCC on establishing this newly conserved area in the Bay of Quinte riding.

“On behalf of my colleague Catherine McKenna, Minister of Environment and Climate Change I congratulate the NCC on the great work that’s taken place. Protection of important habitats for species at risk is vital, not just to our region but everywhere in Canada. Partnerships with organizations like the NCC are bringing the federal government’s goal to double the amount of protected nature across Canada’s lands and oceans even closer. I’m so glad to see our community leading the way on this issue.”

In addition to members of the general public, children from Belleville’s Sir James Whitney School for the Deaf were present to connect with nature and take part in the proceedings.

“It was fantastic to see so many people there, must have been almost 100 come out for the dedication of this new nature reserve on the south shore,” said John Hirsch, South Marysburgh councillor. “I think it’s an incredible example of the work of so many different organizations, the NCC and the Hastings Prince Edward Land Trust (HPELT) coming together and donations from all different sources to preserve this very important piece of land and we hope it’s the first of many more.”