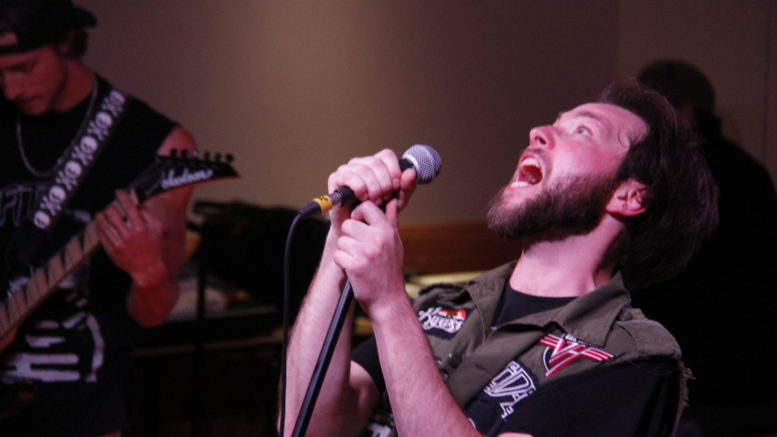 Saturday,  May 25  at the Elk’s Lodge in Picton, the punk rock scene was at full force to  help bring more awareness and end the stigma to food insecurity

Andrew McLuhan and co-organizer John Bourke were interested in seeing if garage bands were still a thing like back when McLuhan was growing up here.

McLuhan use to play in a band called the Polidicks some 20 years ago in Picton.

“Nobody was throwing shows and I got a little tired of moaning about it so we decided to throw a show,” McLuhan said. “We searched for a local band or bands and we found one  called Scum from Picton. They recently graduated high school so they’re not quite a high school band.”

“I’ve known Scum for probably over a year now and I came to show my support.” Kira Rogers, Picton told the Gazette.“My friends are in Scum and are freaking awesome! It was a really awesome show they put on and they’re great guys.” McLuhan and Bourke got a hold of four bands from the GTA to come play at the show as they love the area and appreciated the show’s cause.

“We weren’t looking to promote a show to put money in our pockets, it’s part of the punk thing to try and improve your community so we decided food insecurity was the best cause because it’s such a big issue and everyone knows that,” said McLuhan. “I’m glad I did because in the six weeks organizing this show I’ve learned a lot about food insecurity and it’s not a simple thing to talk about, it’s a very nuanced and layered issue.”

McLuhan added that he has friends who have to make use of the local food banks and the stigma surrounding their usage can be debilitating so it was an easy decision to pick food insecurity as a cause.

He also added it’s not just about throwing a few bucks towards the food insecurity because he knows the show will raise upwards of $1,000 and that amount won’t go far to address local needs.

But this problem in Prince Edward County needs to be addressed.

“Tonight is a bit of an experiment, we’re throwing on this show to see what happens,” McLuhan expressed. “I think we sold a total of five tickets in advance so I’m counting on people to come out and I’ve badgered every body I know to death to come, so whether or not there is a punk scene here will be shown by who comes through the door. I’m optimistic.”

As far as McLuhan and Bourke know there isn’t any other live punk music happening in the County.

Their hope in starting these shows is it will inspire kids to pick up a guitar and drum kit and get loud in mom’s basement, garage, barn or whatever the case my be.

“The reasons I’m doing this is to throw up a flag and say ‘hey were here, get in touch.’ We want to make music happen and this isn’t a one off for us,” McLuhan said. “Were planning on another show already for mid-summer and hopefully this isn’t just my mid-life crisis.”

Mostly everything was donated for the show including: donations from the Elk’s Lodge, Long and Mcquade,  Natalie Wollenberg from 555 Brewery and The County Canteen, Trevor Noris and Stew Jones (Noris and Jones)  Rick and Sonya Szabo from The Vic Café,  Bree Seeley from the Yum Club, Rob Deal and Joe Insley, Ben Vandergaast, Rob Waite from All Access Music,  Pete Hone,  Kyle of Kyle Brown Productions, Linda Downey of the Wellington Storehouse Food Bank and the County Foundation supplied copies of Prince Edward County Vital Signs 2018 report.

“The hard thing was, I like to do an all ages show because it’s really suppose to bring out the younger people,” McLuhan explained. “But because this was a bit of an experiment, it was an added logistical thing that we just decided to go this way this time, hopefully next time it will be all ages and we can allow everybody in, that’s the goal.”

The night brought in around 100 people and over $700 to be distributed between local organizations working to address food insecurity in Prince Edward County.