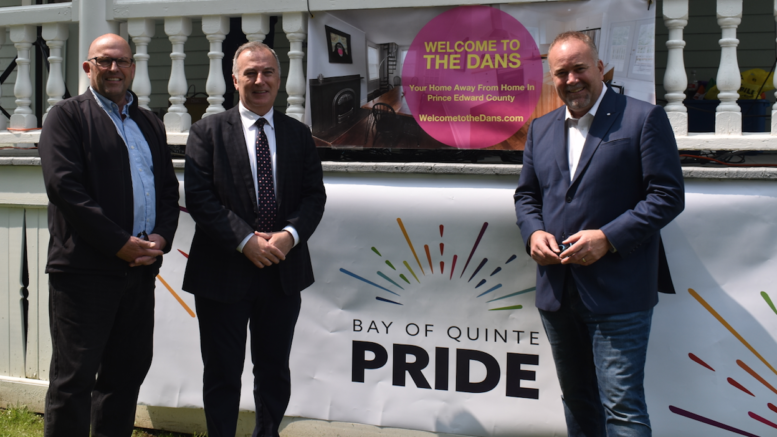 Prince Edward County no longer needs rain showers to bring the colours of the rainbow to Picton.

Like many other communities across Canada, the County is now taking part in what will be an annual Pride Week in Quinte Celebrations, hosting Pride events and hoisting the ubiquitous, LGBTQ multi-coloured flag all along Main Street in Picton.

Last year the municipality made a proclamation announcing Pride Week in the County and, in 2019, the County has joined with the Bay of Quinte Pride (BoQ Pride) celebrations to deliver a week of events, with the opening ceremonies for pride taking place in Benson Park on Saturday.

To kick-off the market and subsequent activities, John-Ross Parks, spokesperson for BoQ Pride, roused the audience who gathered in Benson Park.

The Pride Youth Summit involves youth groups from all over the Quinte region, including Picton.

“When talking to youth, they don’t necessarily know how we got here, so it’s really exciting to bring the youth together to understand how the LGBTQ community grew and got more rights. If this is successful, we are hoping to broaden the scope of the summit next year to include schools,” said Parks, “We are really, really excited about that.”

Before handing the microphone over to MP Neil Ellis, Parks noted that the “The County is killing it for events. Not only are there events at The County Canteen and 555 Brewery, there’s also a Cinefest movie at The Regent Theatre and a breakfast at Huff’s Estate, followed by a tour of Oeno Gallery.”

MP Ellis remarked on how far the community celebration had come since he was mayor of Belleville, congratulating BoQ Pride on their success and efforts and also welcoming attendees of the Pride Market on behalf of the federal government.

Bay of Quinte MPP Todd Smith thanked the community as well and noted that one of the things  he hears most often is how inclusive the community is and how Prince Edward County is  a desirable a location.

“You can come here and practice whatever religion you want to practice and you can love whoever you want to love,” the MPP said.

Mayor Ferguson spoke to the crowd, offering food for thought.

“Even though we’ve made proclamations about Pride Week, we have to illustrate it and demonstrate it through our actions,” Ferguson said.

This year’s festivities were initiated by the Picton Business Improvement Association (BIA) explained manager  Sarah Dorion adding the local portion of the regional celebrations is “an initiative that started small and grew into something larger than originally anticipated.”

It all started when Natalie Wollenberg, then member of the BIA Board, asked if the board would be amenable to adding pride flags for all businesses to the 2019 budget.

“Then we realized we had it in our budget to buy banners for Main Street to celebrate Pride,” said Dorion “We thought the banners would send out the message that this is a really inclusive area that’s open to everyone and welcoming. So then, what stemmed from that was individuals from the community reaching out and saying, ‘This is wonderful! We’re part of the LGBTQ community and we’d like to be involved somehow.’”

Doiron is careful to note that the BIA has merely “connected the dots” so to speak, helping to organize an event in an area where support for LGBTQ people is already palpable.

It was Doiron who called upon BoQ Pride to help support the fledgling Pride Week celebrations here in the County.

“I think everyone has seen how much of a desire there is within the community to have this type of programming and now that this has happened, and these connections have been made, the BIA is going to be taking a step backward going forward. This is really for the community to take and move forward with,” said Doiron. SAYING IT LOUD – Eric Hargreaves, program facilitator at Say it Out Loud, a support group for LGBTQ and allied youth, poses in front of his booth at the Pride Market on Saturday (Sarah Williams/Gazette Staff)

Among the many booths at the Pride Market was that of Say It Out Loud, a youth group for LGBTQ and questioning youth. Program facilitator Eric Hargreaves was there smiling and answering questions behind his whimsical booth that boasted all the LGBTQ paraphernalia one could ever dream of.

“The make-up of the group has changed greatly, in that we have more trans kids now-those who find themselves in the non-binary milieu. When we first started, people named themselves as lesbian or gay. It’s a pretty interesting transformation,” Hargreaves explained.

Penny Morris, who sits on the board of the BIA and owns Penny’s Pantry, also took time to speak with the Gazette.

“It feels like we’re not an island anymore and that we’re not separated from events that are really important for all communities to demonstrate inclusivity,” Morris said.

Though Morris admits there is still room to grow and that communities everywhere are still learning not to be afraid of those who are different, pride is central to increasing awareness of the LGBTQ community.

“It’s very important and I know it’s very important for the LGBTQ to feel validated and welcome,” added Morris. “It hasn’t always felt as welcoming as people would like it to be so this is a visual and community event that shows everyone matters.”