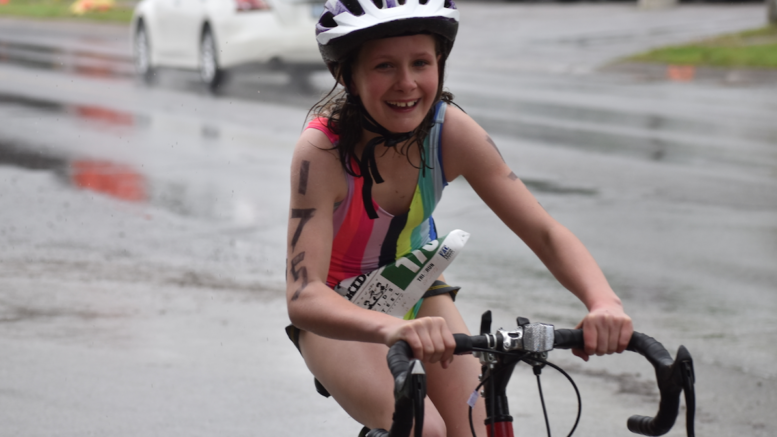 ALL SMILES - Many kids like U11 top female finisher Samantha Richards of Whitby braved the rain to participate in the 13th annual County Kids of Steel Triathlon. (Sarah Williams/Gazette Staff)

Sunday proved to be a day like any other for the County Kids of Steel Triathlon.

This year’s edition marked the 13th  year the youth triathlon was hosted locally and, like clockwork, the skies opened up over Picton.

Despite the soggy conditions over 200 children ages 3-17 participated in the event.

Depending on their age bracket, competitors were expected to swim, cycle and run varying distances with all triathletes starting off at the junior olympic pool at the Prince Edward Fitness and Aquatic Centre (PEFAC).

For all except the sub-midget category (those between 3-5 years) cycling activities took place on roadways such as Main Street and Lake Street while the Millennium trail served as the running course.

Volunteers and Police officers were busy re-directing traffic and making sure the children were safe. TRAVERSING THE DEPTHS – Competitors in the Sub-Midget heat plunge into the shallow water of the PEFAC pool as the first heat to compete at the 2019 Kids of Steel event Sunday. (Sarah Williams/Gazette Staff)

“This is our 13th year, so we know from a lot of previous years what to do and what to expect. We know we always get rain on race day,” Szabo said with a  laugh.

Other organizers include Sonya Szabo, Dawn Middleton and Jay Middleton.

With an impressive number of contestants and a noteworthy 113 volunteers, the numbers were identical to last year.

Not surprisingly, many 2019 Kids of Steel participants are returning athletes.

“We’ve got 15 athletes that are in their 5th year running it. There’s one who is in his 11th straight County Kids of Steel event.” Rick  Szabo added. “They show grit, determination, community spirit and they’re out there even in the rain running their hearts out. It’s a county staple.”

The organizer added race operations require $12,000  and that funding was raised through the amazing generosity of community members.

“We’re so happy the community has been supportive whether with the road closures or with the sponsorships,” said Rick Szabo.

The energy of the race was palpable as mini triathletes and their parents gathered in nervous anticipation before their heat or celebrated  triumphantly upon the circuit’s completion.

“It’s getting the kid’s outside. It’s a way to put the video games down and get the bike out-get back to nature. And, it’s a way to get kids to exercise,” said Rick Szabo. “It’s a good way to show this next generation the importance of being active.”

With over 200 kids running and cycle, often in bathing suits in the rain, the event is a testament to a child’s’ desire for adventure and activities, apart from that of the sedentary variety.

“What is really cool,” noted Sonya Szabo, “is that the rain doesn’t bother the kids. They seem to be really resilient, which is inspiring.”

The results from the 13th Annual County Kids of Steel Triathlon can be found below: