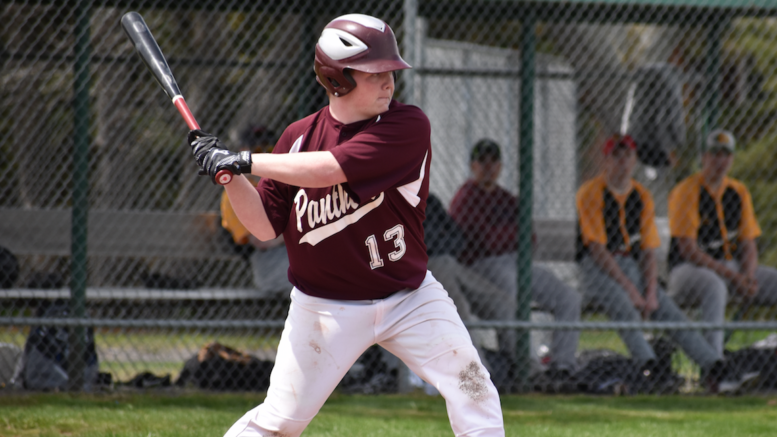 UP AND COMING- PECI freshman third baseman Aiden Reddick had an outstanding season for the Panthers in 2019. (Jason Parks/Gazette Staff)

The dream of being 2019 Central Ontario champions in the Liftlock City turned out to be a bridge too far for the PECI Panthers baseball club Wednesday afternoon.

The Panthers, the 2019 Bay of Quinte Champions, were one of four teams competing for the Central Ontario Secondary School Association (COSSA) title and a birth to the Ontario Federation of School Athletic Associations championships in London next week.

The Panthers managed to insert themselves into the 2019 COSSA finals with an opening round 5-4 win over the Crestwood Mustangs but ran into a buzzsaw called the St. Peter’s Saints in the final.

PECI was game club in the finals, trailing 5-3 into the seventh inning but a bat around inning in the end led to 11 Saints run and a lopsided 16-3 final that was hardly indicative of the Panthers season.

The loss moved PECI’s overall record to 9-1 and while the COSSA end result will sting the Panther squad for a period of time, skipper Matt Ronan said the club had nothing to hang its head about after winning the Bay of Quinte title and earning a silver medal finish at the Central Ontario championships.

“A better team in St. Peter’s  beat us and we wish them luck going forward to OFSAA,” Ronan said. “We had a successful season and it’s a little disheartening because you want the players to go on to participate in the OFSAA championship and have that experience but it didn’t happen this season.”

The skipper took a calculated risk and started his top pitcher in Will Ronan in the semi-finals against the Mustangs and it looked like it might not pay off as Crestwood erupted for three runs in the top half of the first inning.

However, PECI came to play and responded in the bottom half of the first with a pair of runs of their own.

Cooper Rogers led off with a walk and promptly stole second and was cashed in by a Will Ronan double. 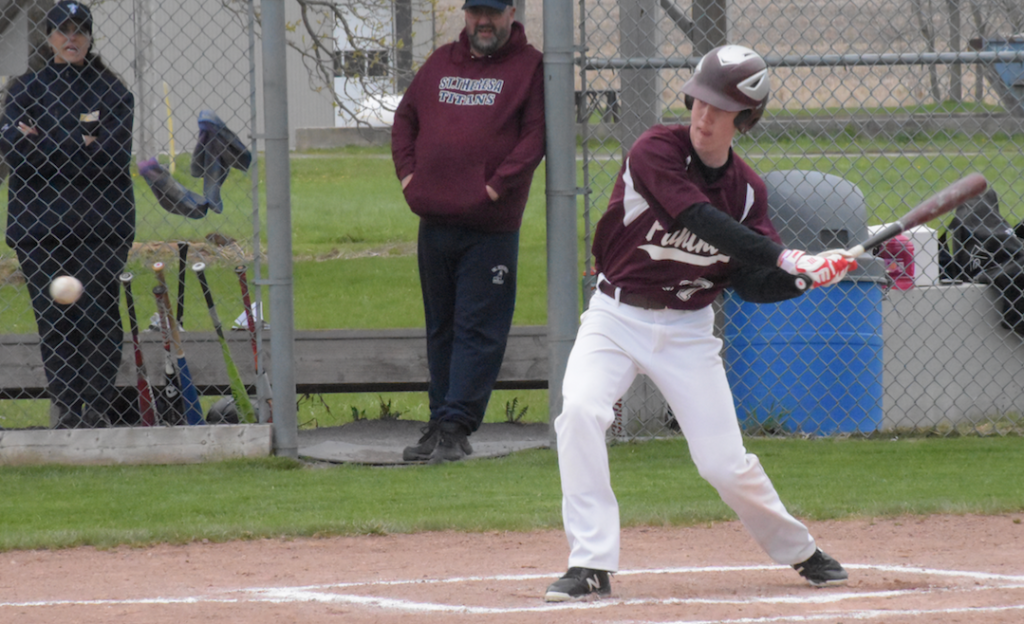 Brodie Byford knocked in the starter with a base hit to make it a 3-2 game early in favour of the Mustangs.

After retiring the first two batters in the second, Ronan needed to escape a bases loaded jam but was able to retire the sixth Crestwood batter of the inning with a pop out to second baseman Nolan Dawson.

Will Ronan would strike out the side in the top of the third but gave up a run off a single, a stolen base, an error and an obstruction call that made it 4-2 in favour of Crestwood.

PECI’s bats finally unthawed in the bottom of the third as Rogers, Nic McGrayne and Ronan led off the inning with back-to-back-to-back doubles.

Ronan would score from third base on a long sac fly off the bat of Ben Wells to push PECI ahead for the first time in the game.

Ronan would need to escape another bases-loaded jam in the top of the fourth but that was as much noise as the Mustangs would muster.

After a 1-2-3 inning in the fifth, Byford came aboard in the sixth and struck out a pair and then was helped by a nice double play in the top of the seventh to preserve a 5-4 victory.

Unfortunately, the win came with a price as both PECI pitchers were extended through long at bats and high pitch counts.

With a 100 per day cap on the number of pitches a pitcher can throw, this meant PECI would need to cobble together a strategy in the second game against St. Peter’s who were able to get past the Eastside Secondary School Ravens in a 1-0 thriller in the other semi-final contest.

PECI turned the ball over to Wells who battled through some control issues in the early going. 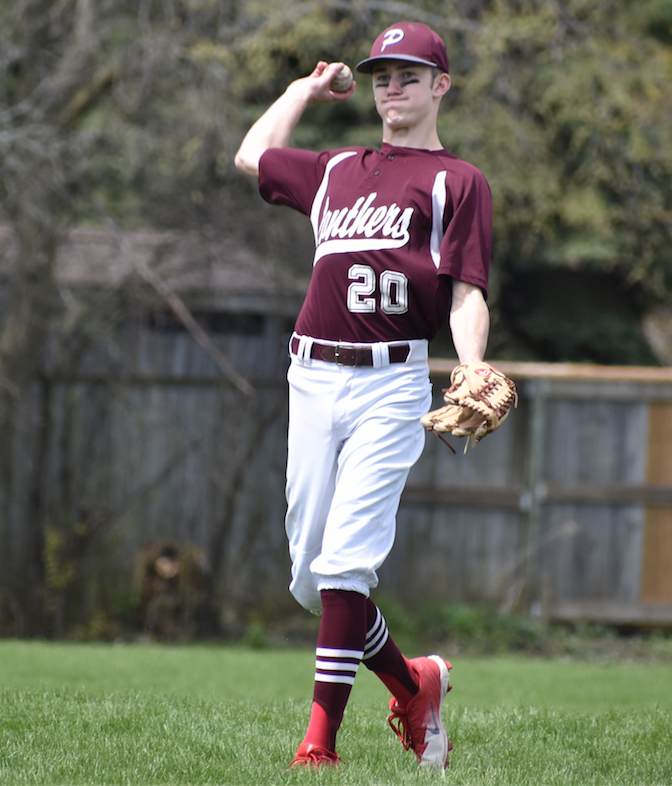 Down 1-0 after the top of the first, Will Ronan and Byford would string together a pair of base hits and and it was Ronan scoring off an error to knot things up at 1-1.

That was as close as PECI would get to the Saints on this day however.

Down 5-1 through 2 and half innings, the Panthers chipped away and again it was Will Ronan hitting a single and coming around to score thanks to a nice piece of hitting by Byford.

PECI got even closer in the top of the fifth as McGrayne singled, stole second and moved to third on an infield groundout.

The catcher would scamper home on a wild pitch to make it 5-3 in favour of St. Peter’s.

But then the nightmare scenario PECI was dreading came to fruition.

With Wells out of the game and Ronan and Byford maxed on pitches, the lack of depth from the rubber was exposed.

Down only two runs entering the final inning, the Saints feasted on PECI pitching, sending 17 men to the plate in a cataclysmic top half of the seventh where the Panthers couldn’t seem to do anything right.

While the pitching wasn’t sharp, PECI’s defence struggled to make plays in the field.

“It was a 5-3 game into the top of the seventh we were  right there and we simply ran out of pitching,”

Matt Ronan said. “As we moved pitchers around, we had to change up the defence and we struggled.”

While PECI might not have made the final game without going to Ronan and Byford in the semi finals, the Saints gambled and saved number one pitcher Joe Kuin for the finals.

“St. Peter’s gambled and beat Eastside with their second starter and I knew we would be up against a pretty great player in Kuin,” the coach said.

Ultimately,  the process of building and honing batting and throwing techniques, fielding and base running skills and strategy in late February culminated in an appearance in the COSSA finals.

Ronan said as with any team at the end of the season, there was sadness in who had played their final game in the garnet and white of the PECI uniform but also hope for next season and the emerging Panthers that will round out the 2020 squad.

“Offensively and pitching wise, we will miss Byford, Ronan and Wells. Those guys produced game in and game out,” the coach said. “But looking ahead, it’s hard not to get excited about some key players in the system. As a Grade 9, Aiden Reddick was able to come in and play third base every game and Nic McGrayne was outstanding for us behind the plate. They both brought great energy to the field every game. Cooper Rogers could be the next PECI graduate that goes on to play post-secondary baseball somewhere and Logan Blower, Nolan Dawson and Nolan Steen all had tremendous seasons for us. In terms of development and the future, there’s a lot to be excited about at PECI.”