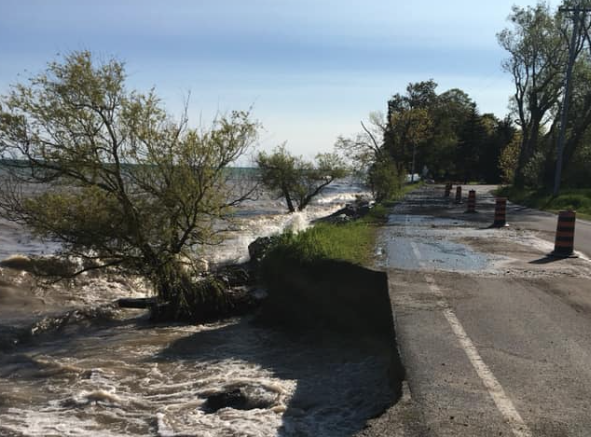 While an emergency hasn’t been declared in Prince Edward County as of yet in relation to elevated water levels, it’s becoming painfully obvious the horrors shore line owners and tourism operators suffered just two years ago are set to return.

With kilometres of Prince Edward County shoreline slowly eroding by the day, roadways being closed due to standing water or washout and hundreds of acres of farm land under water and unable to be planted, Mayor Steve Ferguson convened a press conference at Shire Hall on Monday to discuss current conditions and explain why the municipality wasn’t declaring a state-of-emergency like it did in 2017.

But regardless of declarations and how the municipality moves forward, one thing is becoming clear as lake level riss and rains continue to fall: The island has and will continue to suffer from high water levels from a second 100 year flood just two years after the pervious century mark.

According to Quinte Conservation, Lake Ontario reached and breached the record level set in 2017 last week and waters will continue to rise with the expected to peak to occur within 1-3 weeks.

In response, the County’s municipal control group have met several times in the preceding weeks to examine forecasts, look at current conditions and plot the best path forward. Part of the course of action charted by the municipality is based on lessons learned in 2017 and expanded access to sand and sand bags with a dozen depots being established throughout locations in Prince Edward County is part of the municipal response.

In addition to self serve sand bags, Ferguson again thanked the students and staff at PECI who have combined to fill over 4,500 sandbags for shoreline residents who are physically unable to fill their own bags.

“We would also like to thank residents, businesses and visitors for their cooperation while we try to deal with circumstances we can to little about and our staff for their tireless efforts,” Ferguson said. “Our primary concern has been and will remain public safety. While this might cause inconvenience to some people, public safety is of preeminent importance to us.”

With water levels meeting and exceeding 2017 levels, Ferguson explained he has decided not to declare a state-of-emergency in Prince Edward County for a number of reasons.

First, one of the major reasons for declaring such a state is to set aside certain policies and procedures in order to expedite responses and the mayor explained this was necessary in 2017 because the municipality had never experienced water levels as high as they had risen that year.

Further more, water levels rose much quicker in a shorter period of time in 2017.

“We’ve had more time to get sand bags into position and to make other preparations,” he said.

Communications have been more frequent and Ferguson is confident all services can be delivered without a declaration. The mayor also explained there was no financial gain from declaring state-of-emergency by way of provincial and federal recovery programming.

With regards to the province’s disaster relief program, current indications are the County would have to spend over $3 million in recovery costs to obtain a level of compensation and its doubtful the 2019 flood recovery would cost that much.

Secondly, the declaration in 2017 caused a steep drop in the county’s own business and with the primary tourist season upon us, the message of a state-of-emergency is not a favourable one. 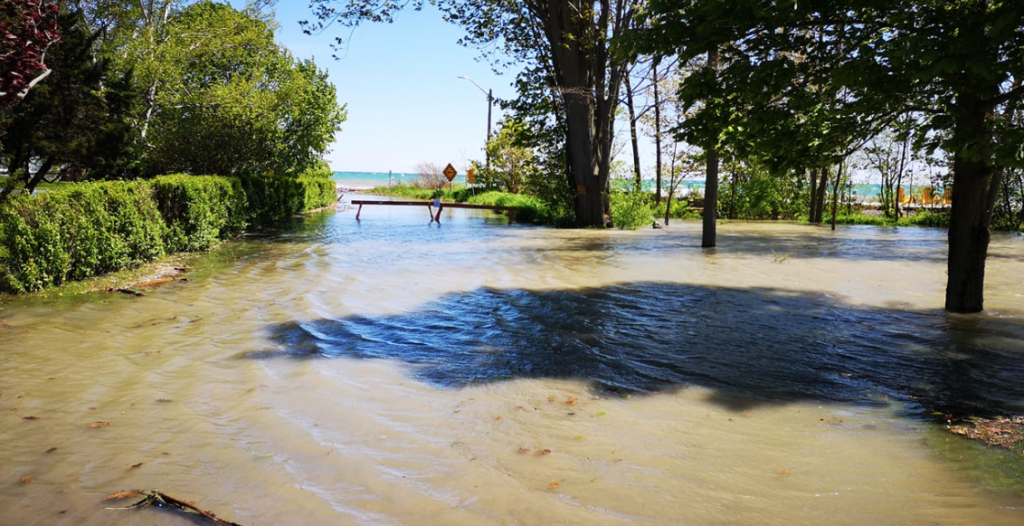 Beach Street in Wellington is closed. (Scott Johnston For the Gazette)

“We are open for business and welcome everyone,” Ferguson said. “If visitors stay away because of a state- of-emergency and we lose out on business, that negatively impacts employment and that negatively affects the local economy.”

Quinte Conservation (QC) Water Resources Manager Christine Phillibert said the current flood forecast calls for a further rise of 3-9 cm of Lake Ontario over the next 1-3 weeks and added the rate of rise has been slowing.

As to why the water is so high, Phillibert said a number of contributing factors were in play including Lake Erie at a record seasonal high 10 cm over the previous high water mark as well as the Ottawa River reaching record highs earlier this spring. In addition, many areas on the lower St Lawrence river are at or exceeding seasonal record highs and the Great Lakes watershed has received a record amount of precipitation over the last four months. With limits on the amount of outflow by the International Joint Commission that operates the St. Lawrence Seaway system, the water in Lake Ontario doesn’t have anywhere to go.

“There’s been flooding both up and down stream and the International Lake Ontario and St. Lawrence commission have to manage risks on both sides of the dam,” she said.

In terms of what shoreline owners could do once the waters recede, Phillibert said QC regulates development along shorelines and staff are available for site visits to examine damage and discuss options for protecting shorelines into the future. She added the Conservation Authority granted over 100 permits issued for shore protection measures following the 2017 flood and that staff were following up with those successful applicants to see how effective those strategies were. In terms of operations, the municipality has been tasked with roadway flooding, boat launches under water and shoreline erosion.

Roads in low-lying areas have been identified and the municipality is working to make sure they are passable.

“The County aims to keep at least one lane of traffic open on all of our roads,” said Robert McAuley, Acting Chief Administrative Officer. “At this time, we have water on portions of several roadways that we are closely monitoring. With the exception of Beach St. in Wellington, all roads with water over them remain open and signed accordingly.”

Beach St. is closed to all but local traffic and the bulk water hauling station is closed as well.

On Winns Drive and Wesley Acres Road, there is significant water buildup on the roadways. Over the next several days, Operations staff will erect barriers and deposit additional gravel to ensure at least one lane remains open on both roads.

“We have identified these roads as priority because there are no alternative routes for people on these roads,” McAuley added.

In total, six of 12 municipal boat launches are closed or limited in their usage and those launches affected are listed on the County’s website. The press conference occurred before a portion of shoreline was washed out almost underneath the road bed on County Rd 12 between Hyatt Lane and the Woodland camping area.

The municipality has closed this portion of road that links the Outlet and Sandbanks portions of Sandbanks Provincial Park. Repairs on County Rd 12 will commence Monday.

“This a very challenging time for residents and we share in that frustration. We will remain vigilant, monitor conditions and make preparations accordingly and we encourage residents to do the same thing,” he said.

While he didn’t mention their plight at the press conference, Ferguson did take to social media after the press conference and asked local residents to remember the hardship County producers are facing. Standing water in field and daily bouts of precipitation have put a crimp in spring planting to the point where, without steady dry weather, grain crops may not make it into the ground and fields in could be glaringly fallow this summer.

“Our agricultural community is experiencing a very difficult time because of the low temperatures, the precipitation and the effects of flooding,” Ferguson noted. “As you make plans for the summer please support our farmers in any ways you can, whether by buying local produce and products, or by being patient as they and their equipment make their way along our roads to tend to their fields.”